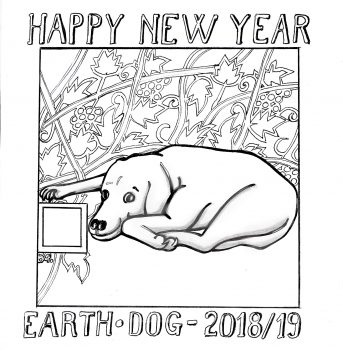 Tibetan New Year is called Losar and is celebrated to welcome in the New Year. New Year is a festival common to the whole world and celebrated at different times, according to the way the beginning of a new year is calculated. There are, however, great differences within Tibet re­garding the preparations for the auspicious ceremonies of the New Year determined by the cus­toms of certain regions. Tibetan people who live in high, snowy regions have many traditional festivals, the New Year being the most elaborate. 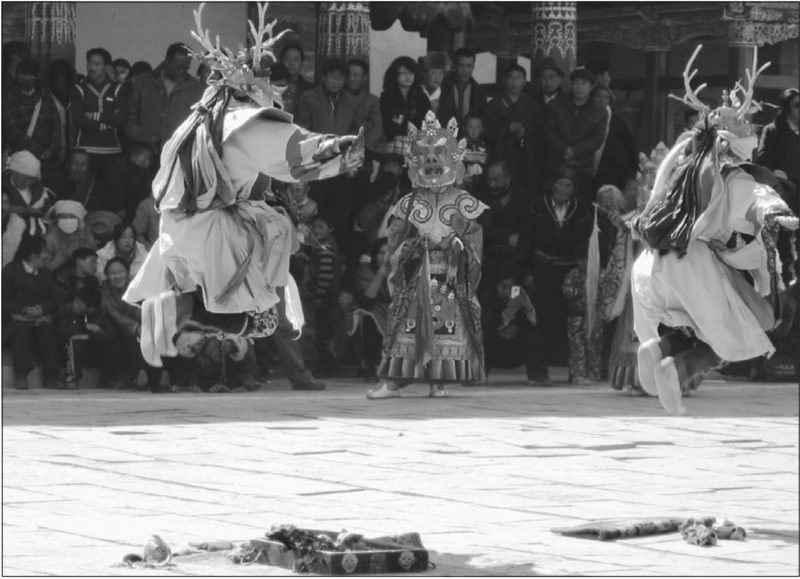 Although the different ways to celebrate the New Year in Tibet vary slightly according to differ­ent provinces, for the most part they are similar. The prepara­tions, which start at the begin­ning of the twelfth month, and culminate on the twenty-­ninth day of the twelfth month, begin with the house being cleaned well, inside and out, make sang in the house to remove negativities from the house and round marks are made on the pillars and beams of the kitchen with white flour.

There is the tradition of prepar­ing a soup called ‘soup of the twenty-­ninth day’ (dgu thug), for dinner. That same evening, to­gether with the offering of a sac­rificial cake (gtor ma) to the gods, done by monks in the monas­tery, for the sake of casting off the bad influences of the previ­ous year, each household carries some old clothes, broken kitchen utensils, some dirt from cleaning the house, a little of the soup of the twenty­-ninth day in a broken bowl, and some pieces of dough mixed with some dirt from a body (symbolizing the removal of impurities and with specific diseases the place of the disease has touched) modeled with five fingers in the dough, placed in a jar with the clothes, fallen hair, etc.; all is taken to the nearest crossroad. This is symbolic of taking out all the negativity and if there are some invisible beings attached to certain things we can satisfy them by making these offerings. We offer those beings what they want and then they are satisfied and we ask them to go out.

The ‘soup of the twenty-ninth day’ or dgu thug is the divination method for the coming year. The main aim of the soup is for the gathering of the family and to enjoy and have fun together. The primary ingredients used to prepare the soup are meat, tiny sweet potatoes, rice, wheat, vari­ous greens, and cheese. Small pellets of dough are prepared and cooked in the soup. Some of the pellets are slightly bigger than others; if one or more of the bigger pellets of dough falls into the bowl of someone, what the pellet contains serves as an in­dication of the character, behav­ior of the person and a sign of what will happen to the person in the future, i.e., chili (harsh and scolding speech), coal (black heart), paper (unstable), wool (patient), wood (inflexible), salt (lazy), sugar (empty sweet talk), bone (good and strong charac­ter), stone (stable and kind) are placed. Also placed in the soup are the sun (famous for show­ing the way for other beings) and moon (good and helpful for other beings), shoes (traveling), a polar star (intelligence) and a religious scripture (teachings and scholarship) all modeled in dough.

The substances put in the pellets vary a little according to the vari­ous regions, for instance in the nomadic regions a piece of the leather from the collar of animals is placed in the bigger pellets to predict whether the cattle will be good or not in the next year. Be­fore eating the soup, the articles to be thrown away are prepared, a little soup is poured into a broken bowl and all this is carried away to the cross road. That night these articles are taken away by four or more young men, one of who carries a stick with a bundle of dry hay, which is then ignited. Heading the group, the young men turn around three times in the house saying: Come out! Come out. The group leaves the house and the last of them lights firecrackers as a symbol of chas­ing away the bad influences.

Once they arrive at the crossroad (in Eastern Tibet it is the young men who arrive) they imitate the sound of a barking dog and most of the firecrackers are lit. After the young men have thrown away the ransom, they return to the house without looking back. During the time of giving away the ransom, it is considered that if a member of the family (except those who went to give away the ransom) does not return to the house but lingers around for business or other purposes, in the following years they will encounter misfor­tune. When the young men return to the house, everyone eats soup, drinks ale (chang) and converses in a relaxed and playful way. As the bigger pellets are found in the bowls of various people, the significance is explained and is cause for merry laughter.

On the thirtieth day, the house is prepared for the festivity and ar­ranged with new tables, chairs, carpets, etc. Different foods are prepared: food for the family and guests and food that is offered to the gods. The house is cleaned again in the late afternoon of that day and the special sweet New Year biscuits called kha zas are arranged beautifully in an inter­twined pattern on the altar of the house together with dry and fresh fruits, cheese, and butter. In Eastern Tibet there is the tra­dition of preparing what is called powdered butter that consists of roasted barley flour to which but­ter, sugar, honey, and milk are added. In Central Tibet this is substituted by an offering placed in a nicely painted box with two compartments; one compart­ment filled with roasted barley flour and the other with roasted wheat.

These offerings are place on the altar in the following way: at the centre plates with nicely arranged sweet biscuits, next to them, a head of a sheep made with butter (in an­cient times it was probably a real sheep head that was placed) and the head of the sheep is adorned with jewels and scarves and the mouth smeared with butter. The sheep symbolizes an offering for the cattle herding of the past year and an auspicious factor for the success in cattle herding in the New Year. Next to the sheep’s head is a nice jar containing fresh sprouts of barley or wheat plant­ed a couple of weeks before, as an offering for the past year’s crops and an auspicious growing sea­son for the New Year.

Early on the first day of Losar, the main person responsible for the house, usually the mother, gets up early in the morning to pre­pare the chang skol, a Tibetan ale made with barley to which tiny sweet potatoes, molasses, and butter are added and then boiled. This ale and some sweet New Year bis­cuits are distributed to the mem­bers of the family while they are still in bed. Then a little later, from 5:30 to 6 am, the members of the family get up. Another tradition is to leave a bucket of water outside the house exposed to the stars. This water is called water of the stars, dkar chu. In the morning, before the stars have disappeared from the sky, this water is brought into the house and hot water is added or the dkar chu is heated, and when it is luke­warm, the members of the fam­ily wash the five limbs: the face, mouth, hands and feet, with the water. In the very cold regions of Tibet, the water is not left over­ night as it may turn to ice, but is only exposed to the stars for a while in the early morning be­fore dawn. It is believed that the power of the stars reflected in the water can contribute to elimina­tion of diseases and other imped­iments that the person may have. 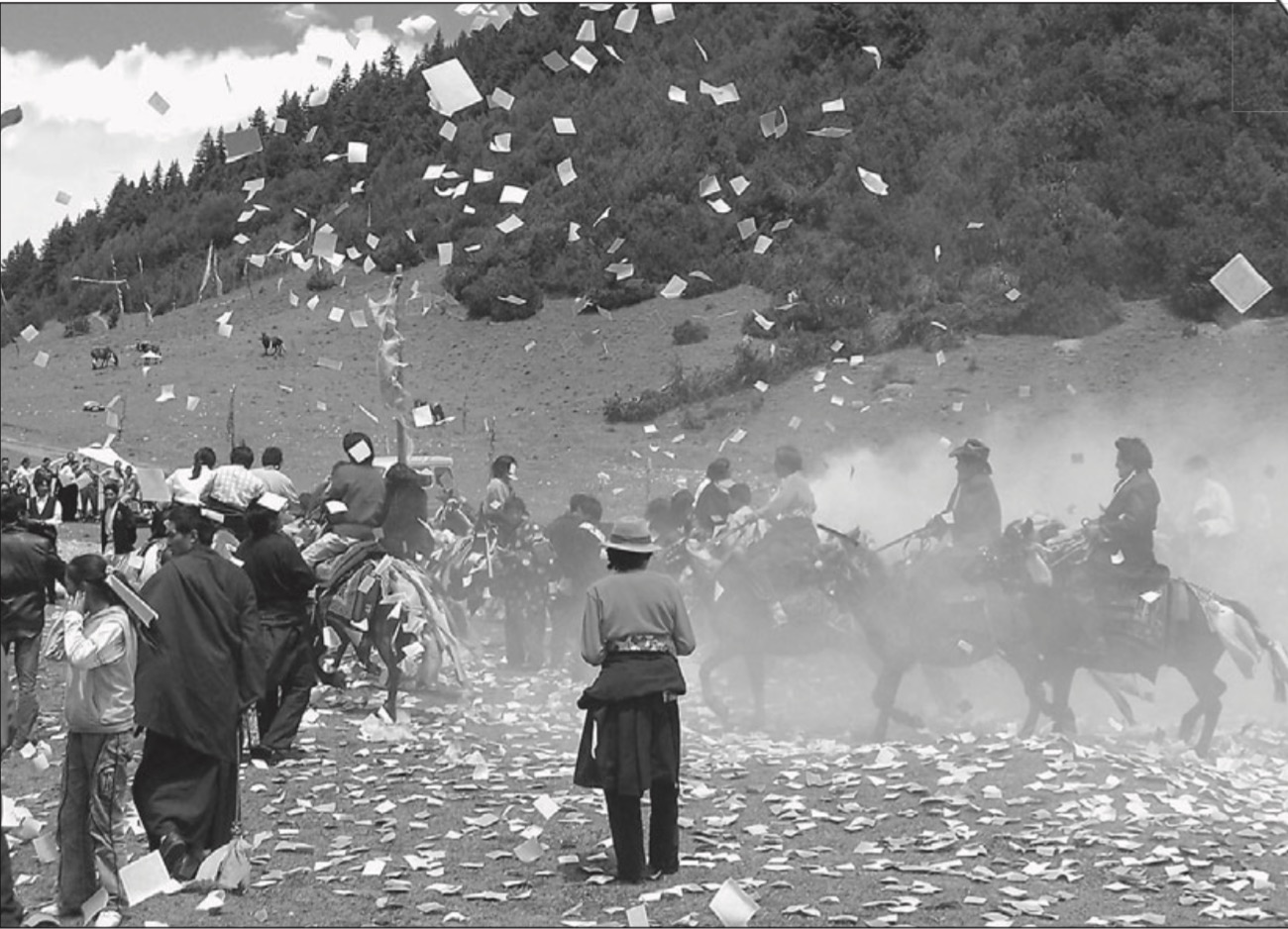 When the family members meet, as soon as they have woken up, they greet each other with the phrase bkra shis bde legs, which means ‘Good luck and happi­ness to you!’ Then the mem­bers of the family wear their best clothes and ornaments and sit in their respective seats in order of seniority. Two youths, a female and male or two of the same sex, distribute chang or ale from a new stock, to members of the family in order of seniority reciting aus­picious verses for their fortune, long life and religious activities. In turn, the older members recite auspicious verses for the younger members. The powdered butter is presented to each member of the family who in turn takes the powder three times, scattering it in the air reciting, for example in the Eastern regions, ‘A mouthful of powdered butter, the glory of merit, and everlasting happiness and joy. Oh what a joy!’ (phye mar gyi kha gang/bsod nam gyi dpal gang/ skyid dga la yun ring/ a la la ho). In Central Tibet the auspicious words are, ‘Good luck, happiness and abundance; may the beauti­ful mother be healthy and gain everlasting happiness; may this day of the New Year bring us to­gether again in happiness’. After this, tea is distributed in porce­lain cups adorned with the eight auspicious symbols or in wooden cups adorned and covered with silver. Then the members of the family have a breakfast of roasted wheat and rice with sweet pota­toes, butter and resin called bras bsil. Then offerings are made to the front altar in the home and then in the temples. Another im­portant activity of that morning is to go to meet one’s teacher and offer the traditional white silk scarf and other offerings and ex­press one’s wishes for his or her long life and happiness.

On the second day of the New Year, people visit the houses of close relatives and receive visits of close relatives. On the third day, all the members of the fam­ily go to the top of the house to change the prayer flags on the prayer flag pole on the roof and remain for a while on the roof offering each other the powdered butter and drinking tea. Then, after break­fast, together with the other in­habitants of the area, they go to a sacred place nearby and authenti­cate prayer flags and perform the ritual of the bsang offering of the smoke of the juniper and other fragrant substances to the gods.

From the fourth day onward people visit the houses of neighbors and invite guests for meals. They start to enjoy the fes­tivity, merrily engaging in various games and sports: playing dice, bagchen, singing, dancing, riding horses, pulling rope to measure strength, archery competitions, and running competitions. The festivity usually lasts for fifteen days, but for another fifteen days people are still infected with the atmosphere of the New Year and unofficially continue to cel­ebrate.

Reprinted from issue 71 of The Mirror