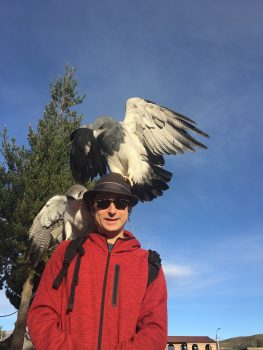 Hi! My Name is Curzio Aloisi and this is how I met Rinpoche.

It is a simple story, nothing miraculous – a story of friendship and connection.

It all started when I was seven. This kid Jampel Del’Angelo came to our English school in Rome, it was September 1989…At the time I already had a best friend, Paco. He had made me the manager of the lunch-break football team, I was very honored with that title and I took pride in it. Little did I know that it was only to not make me play at all, and yes, I probably wasn’t all that good at playing football.

So this kid Jampel quickly ascends to popularity: he is smart, he is athletic, he is in synch with fashion, and the ladies love him. Taking over the football field, he quickly fired me from the position of manager, or rather, he burst my bubble. It definitely was painful, like an ice-cold bucket of water. Either way, we became friends. It was from him that I learned how to wear back washed blue jeans, how to play the Sega Game Gear color portable videogame, and how to have fun! I was a somewhat troubled kid and he was always there for me, a good friend.

We would do sleepovers and that’s where I met all his family, Giacomella, Andrea, and Matteo. We would play in his garden and dare each other to climb trees, do pushups, fight, play video games, going to the park; it was fantastic. Running around their the house I certainly noticed many oriental paintings on cloth, and in particular one of a naked lady playing drums, it was hung on a column right at the entrance. Matteo had a beautiful drawing of Tibet in his bedroom, or it might have been Jampel’s room, certain things I cannot remember anymore. I do remember they were good times. One summer vacation, my dad brought me up to Monte Amiata in Tuscany so I could spend some time with my friend and his family. They had just bought a very nice house in the country and it was still being renovated; we were sleeping in a rented apartment in Roccalbegna, it was great fun running around the farm, they also had horses. There I met Jampel’s uncle Enrico, and Jampel’s granddad. One day we drove up to Merigar.

At the time Rinpoche wasn’t there, but we had lunch there, we ate at the Yellow house, it was pasta shells in a curry sauce, it was one of the first times I tasted curry, I remember that clearly. I was playing up there with my fishing rod and pretending the dirt road was a river. The rod was a gift for my birthday by my Dad, who has a passion for fishing. I rarely fish anymore, but when I do, I try to integrate and enjoy.

After that summer, my friend and I lost touch, going to different middle and high schools.

Then something awakened in me. Towards the end of high school I started to take interest in meditation. When we were on a family trip to New York I went and bought a book on ‘Tibetan Mysticism’ by Lama Anagorika Govinda at the famous Barnes and Nobles in Union Square. Back from holidays, I decided to find some center to do some meditation. At that time I was living in a small village near Cambridge in UK. I started participate in the community of master Sri Chinmoy. It was good and powerful, but very difficult for me to follow all the ashram like rules. I was pretty distraught when I dropped out, but I knew I wanted to do some ‘Buddhist’ practice.

At that point I was back in Rome, right on time for Jampel’s 18th birthday party, to which I decided to go, so I could see my long lost friend. It was nice to see Jampel again and to catch up! Giacomella and Andrea were happy to see me again too. Talking with them they discovered my interest in meditation, and Giacomella said that I should read The Tibetan Book of Living and Dying by Sogyal Rinpoche. So the following weeks I did that. I was reading for the first time about Dzogchen and it was very interesting.

Jampel and I started to hang out more, and one night when I was having dinner at Jampel’s house in Rome, Giacomella had made an excellent lasagne, as always, she mentioned that there was a great Dzogchen master in Tuscany near their house and that I should go to the summer retreat.

So I did. I was back in Merigar after many years, and was excited to receive direct introduction!

It was around 2002 and it was a Longde retreat, and Rinpoche was great! I met a lot of new people, but a great coincidence was that my second grade teacher from when I was seven years old was there!

I didn’t really understand or experience much though. I went to the following summer retreat, and this time when it was over I had a clear experience of my state, while riding back home on my moped. I am extremely grateful to have had the fortune of meeting Rinpoche, the teaching, and the Community. And it was all because of friendship and connection.