One of the mouths of the port of Venice, a splendid June day, the mandala spread over the bright green grass after the rains, and some contemporary works of art placed around a beautiful open space by the waters of the Marina di Sant’Elena. On June 12 the International Atiyoga Foundation was invited to participate in the opening of the third edition of BIAS 2020, “The time of the game, the game of time” presented by the World International Sicilian Heritage, the artist Rosa Mundi, and the Donà dalle Rose Foundation. BIAS is the International Biennial of Sacred Contemporary Art of Religions and Beliefs of Humanity and in April 2019 the president of ATIF, Marco Baseggio, and Chiara Modica Donà dalle Rose, of BIAS, signed a collaboration agreement in which Gyamtsholing, the Dzogchen Community of Venice, as well as other local Dzogchen communities were involved.
On the occasion of the opening, Marco Baseggio, second level Yantra Yoga instructor, Chiara Carraro, first level instructor, and Giovanna Carraro offered a demonstration of the nine breathingss, the eight movements, the first and third group of yantras, while Adriana Dal Borgo, an international Vajra and Khaita dance teacher, danced with Gyamtsholing practitioners in the presence of guests. At the end of the TunAdriana invited the public to take off their shoes and try some simple steps, tsom,and the mudraof receiving and expanding following the rhythm of the dance of the Three Vajras.

The day before, at the press conference held in the beautiful Palazzo Donà dalle Rose in Venice, Marco presented the activities of ATIF and talked about Maestro Chögyal Namkhai Norbu, while Adriana introduced the principles of the Vajra Dance. 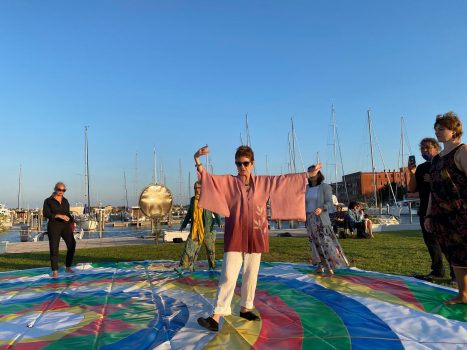 Photo by A. Fiorani

Some artists belonging to the Dzogchen Community also exhibited their works at the Biennale, thanks to the close collaboration of last year. The Italians Rita degli Esposti, John Gian and Fabio Andrico. Roberto Zamparo set up a small exhibition of his photographs in a space at the Marina yacht club. In other installations at the Art Biennale there will be works by Russian, Ukrainian and Chinese practitioners.

The following day Marco attended the second stage of BIAS at the beautiful Villa Barbarigo park in Valsanzibio. (In fact, the Biennale will take place between Venice – Palermo – Sicily – Tuscany – Liguria – Saint Petersburg – Israel – Africa). Another opportunity to present the International Atiyoga Foundation and open to the outside world through the world of contemporary art, for new, interesting and deep collaboration on the path indicated by our precious Master.