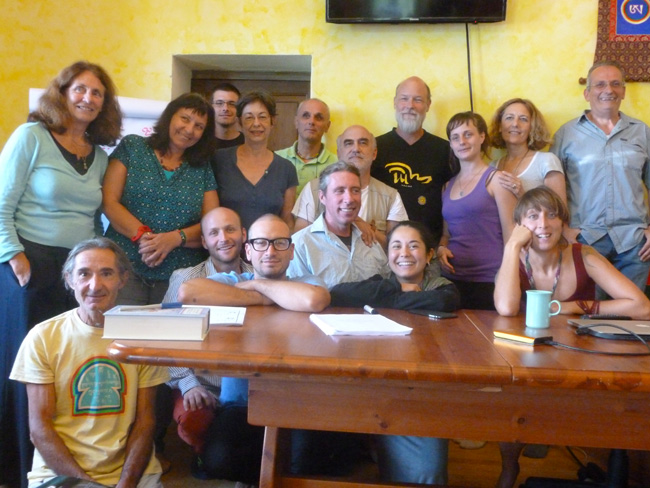 From 18th to 25th August  2015, shortly after the Retreat on the Bardo by Chögyal Namkhai Norbu, the 2nd Tibetan Language Course for Beginners of the Ka-ter Translation Project for Beginners organized by the Shang Shung Institute (Austria), was held in the picturesque setting of the Merigar library. The course was taught by Fabian Sanders, professor of Tibetan Language and Culture at the Universita` Ca` Foscari in Venice, and was attended by a group of about 15 students (the webcast was also available for those who could not be present).

During the course various topics concerning the basics of classical Tibetan language were discussed, starting from the study of the alphabet and Tibetan script dbus chen (block letters), the syllable with its parts, the spelling and punctuation, up to the study of the formation of nouns, verbs and adjectives, the grammar (main particles and grammatical cases) and the syntax.

The course was very productive as the participants tried their hands at translating, for example, phrases from some Sutras, Tantras and other texts in Tibetan language. In this way, the students constantly found themselves in the heart of Classical Tibetan, assisted by Fabian who patiently explained the mechanisms and characteristics that make this language unique in the wider framework of the main oriental languages. Reference to the terms, both in Tibetan and Sanskrit, used in the Sutra, Tantra and Dzogchen Teachings was often made, proving particularly interesting and challenging for the Dzogchen practitioners by creating the basis for direct access to the original texts of the Dharma Teaching.

The course included two sessions daily, two hours in the morning and two in the afternoon, and a one-hour morning session of Tibetan calligraphy, held by Giorgio Dallorto. Starting from next September 19th, Prof. Fabian Sanders will be holding a series of week-end courses of assisted translation for those who attended this beginner course, also available online via webcast, in order to provide the students with much easier access to the Ka-ter courses of intermediate and advanced levels. The courses will be focussing on the detailed examination of the most common practices used in the Dzogchen Community, starting with the Thun book.

Many thanks to Fabian Sanders and the organizers of this Course for having created this opportunity, thus laying the foundations for the formation of a group of translators who can possibly work together in the future on the enormous translation job of the sacred corpus of Dharma texts.