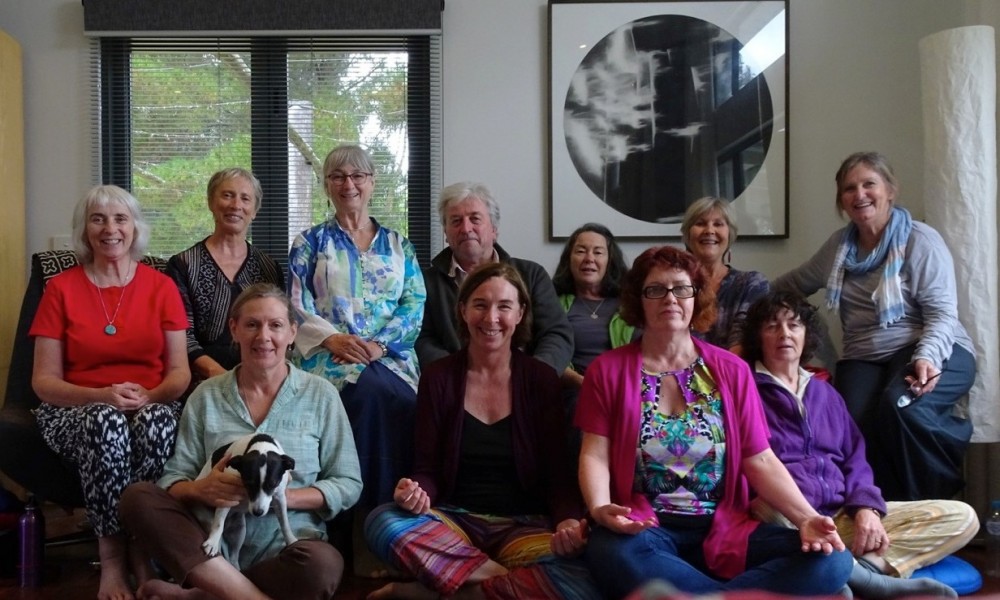 When Namgyalgar South was dissolved last year, vajra sangha living in the local vicinity were intent on maintaining their connection in the transmission and continuing to practice together, and with any visiting practitioners.

Thankfully, with consent of the Gar’s new owners, ‘Drogmi Buddhist Institute’ (of the Sakya tradition), Vajra Dance practitioners are still able to practice the dance on the mandala in the Gönpa. Ganapujas and others practices are being held in practitioner’s homes.

Of great benefit was the consolidated collective practice undertaken recently during a 5-day retreat led by Santi Maha Sangha Base teacher, Angie Gilbert, in the home of Glenda Morgan near Bermagui. Attending the retreat were six practitioners from the local area and four others from Canberra, Victoria and Tasmania. The main focus of the retreat was the practice of the ‘Purification of the Six Lokas’.

In addition there was Shitro practice done for deceased loved ones, vajra kin, and others, as well as Guru Dragphur practice dedicated to others in need. A group of ten practitioners also did a Vajra Dance thun at ‘Kamalashila’, as the former Gar is now known. The retreat concluded with a short Ganapuja, following a Six Lokas practice and a brief practice of the ‘Vajra Dance of Space’ (Khalong Dorjekhar).

In a relaxed way, people also enjoyed some outings during the retreat such as an outdoor sculpture exhibition, swimming at Camel Rock beach, a barbecue, a Chinese meal, and fish and chips by the seaside.

Those who participated in the retreat were invigorated by the deepening and strengthening of their practice and inspired to hold another one some time.

All were very appreciative of Angie’s concise explanations and guidance and felt immense gratitude to Rinpoche for the Teachings and Transmission.