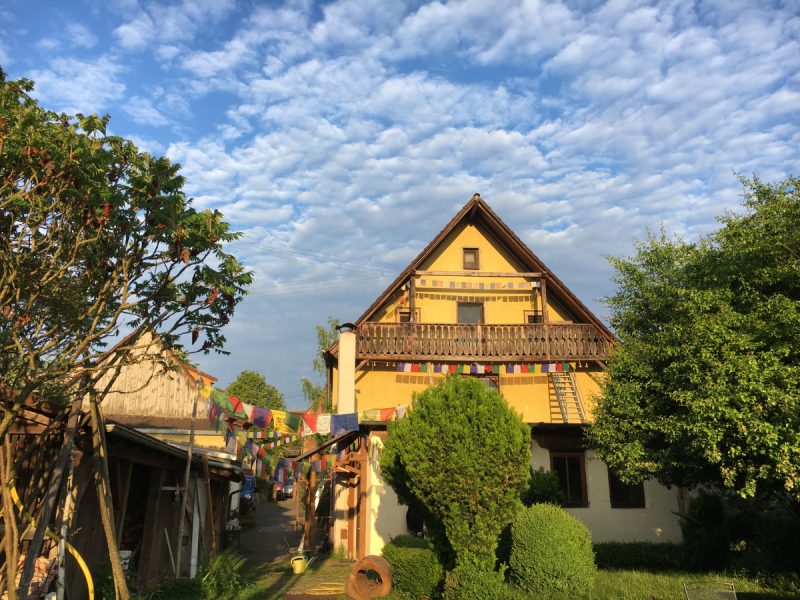 After an earlier weekend course on harmonic breathing and Kumbhaka in Munich and later a first summer retreat 2018 in Bavaria about the 7th Lojong  with Zhenya (Evgeny) Rud, 2nd level Yantra Yoga Instructor, many of us were looking forward to a 10 day deepening course, that took part February 22 – March 3, 2019.

The site at Höfen, a remote and small village, is the warmly inviting center of the Vogel family, well known for many years by Dzogchen practitioners near and far. Our aim this time was to learn about and practice the first and second Pranayama of Yantra Yoga more profoundly and effortlessly, as well as Kumbhaka, Saltong (7.2) and Parlung (7.3) and applying Tsigjong, Lungsang, Tsadul and Yantras accordingly.

At the start of our course, Zhenya stressed that this is a time of recollecting what our Precious Master has given us, treasuring what we received as a heritage and base in order to obtain the fruits instead of hunting for many more paths and methods. In the coming ten days of intense learning our attention was drawn always towards focusing on the essence of the practice, exploring how the three doors are interconnected and work together: mind directing energy (horseman and horse), body movements supporting the flow, experiencing how each of the three doors affected each other to return to a state of clarity and emptiness. Taking from the different exercises in a nonlinear way – preliminaries as well as the series – we were taught and could sense in every Yantra movement how the same principles were at work and could actually be felt, mind guiding prana (and discerning breath and prana), finding out how the subtlest movement – e.g. a stretch of a fingers stretching the whole spine, a rotation of a joint opening shoulders – moved the whole sense of being.

Training this way was an adventurous journey full of surprises: you think you at least mastered the nine purification breathings? Actually – wrong! You think you will never master even the pranayama of the first series? You bet! Slowly and mindfully, step by step, tracking signs of effort or tension, finding ways to relax and enjoy, things evolved. During the four Thuns per day of at least 2 hours each, starting from 6.30 a.m. (courtesy of the instructor and thanks to the heating system) alternating exercises, study and personal practice hours, sharing what we found out between the collective practice times.

Zhenya showed immense patience, humour and inventiveness given the fact that we were at different levels of practice and knowledge, leaving nobody behind but supporting everyone very attentively as well as giving space to those who wanted to have more private practice of Saltong or who could not take in more information.7th

Inspiring and unforgettable images (like breathing gently into a hen`s nest in the lower belly without disturbing the delicate eggs, moving ever elegantly like in a tea ceremony or breathing through nostrils below to approach the central  channel) made the practice alive for everyone whilst we were repeatedly told to not simply believe and copy our instructor but to let our own body and energy be teachers to listen deeply to and find out the right flow.

The invigorating effects of our practice also showed in the times between the Thuns: there was time for cooking together a lung-adapted diet under the guidance of our chef Kordula, eating and cleaning up in a seamless weaving, having long walks, private times or sharing company in a joyful mood, even a flu virus running about could not stop us.

Towards the end we asked Zhenya to return and continue: in ways open to new people as well as building up our practice which he is willing to do in late autumn. A la la ho!

P. S.: That is now taking shape: 15 – 24 November 2019 a Deepening Course on Kumbhaka, Parlung, 2nd and 3rd Pranayama of Yantra Yoga and the practice of the 7th Lojong with Zhenya will take place in Höfen. Topics of this event may include Saltong (7.2) of 7th Lojong, supported by the application of Rhythmic Breathing and by Yantras according to the needs and capacities of participants. The announcement for this event will be published on Norbunet.