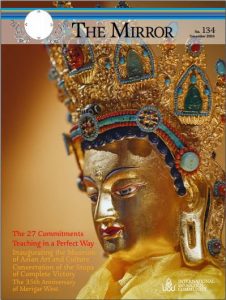 This December issue of The Mirror brings 2016 in the International Dzogchen Community to a close. It is with great sadness that we publish a tribute to one of the founding members of the IDC and member of the International Gakyil, Enrico Dell’Angelo, who passed away at the end of the year.

The issue is rich with Chögyal Namkhai Norbu’s recent Santi Maha Sangha teachings at Dzamling Gar, his talk on his 27 personal commitments as a Teacher, and his advice to SMS instructors at the end of the Training.

The section on the Global Gar in Tenerife gives an update on the Gönpa project as well as the experiences of two of the SMS teachers during the Training.

Issue 134 also focuses on Merigar West in Italy where the long awaited Museum of Asian Art and Culture in the nearby village of Arcidosso was opened by Prof. Namkhai Norbu and celebrated by the authorities of Mt. Amiata and a host of international guests. During the same period, Merigar West celebrated it 35th Anniversary, during which a Festschrift, a publication honoring Chögyal Namkhai Norbu was presented to him. During Rinpoche’s stay at Merigar a street in Arcidosso was named ‘Via Tibet’ in his honor, and the marble Stupa of Complete Victory was consecrated. This issue brings you accounts of all these events, together with many great photos.

This December issue also presents two book reviews of three books, The Holy Madmen of Tibet and The Guru Drinks Bourbon by Alex Studholme, and Buddhahood in This Life by Jacqueline Gens. Diane Kramer and Elio Guarisco have contributed articles on Collaboration, and we have interviewed Fabio Andrico about Harmonious Breathing.

Our Dzogchen artist for this issue is Federico Herrero from Costa Rica while the Dzamling Gar Gekö, Rabjyi, tells a fascinating story of How He Met Chögyal Namkhai Norbu.