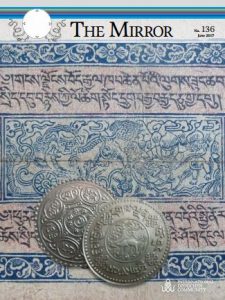 The Mirror, issue 136, June 2017, presents many articles of great interest, beginning with Chögyal Namkhai Norbu’s public talk on The Relationship of the Physical Body and the Mind, given in Gran Canaria, Canary Islands, Spain, during a three day event on Tibetan Medicine and Culture in April 2017.  This is followed by a talk Rinpoche gave on the importance of the International Gakyil on April 16th, 2017 at Dzamling Gar, and important updates and news from the International Gakyil with contributions from Mark Farrington and Scott Diamond. There is also an interview with Steven Landsberg as the new president of the IG.

This issue presents much anticipated information about the new project of the Gönpa at Dzamling Gar as broadcast by webcast very recently by Giovanni Boni. Then there is a detailed article entitled Tibetan Coins and Paper Money, An Introduction to Tibetan Numismatic History with a Description of its Symbolism and Calligraphies by Giorgio Dallorto (from where our beautiful cover comes), and an article on the The Reopening of the IsIAO Library in Rome (Istituto Italiano per l’Africa e l’Oriente).

As usual there is news from Gars around the globe, programs, schedules and updates, and two book reviews: Matthieu Ricard’s translation of Enlightened Vagabond – The Life and Teachings of Patrul Rinpoche and Babeth Mondini-VanLoo’s Art=Life=Art. Peter Makela tells his story as an Artist in the Dzogchen Community and the issue wraps up with Anna Neyman’s story of How I Met Chögyal Namkhai Norbu.