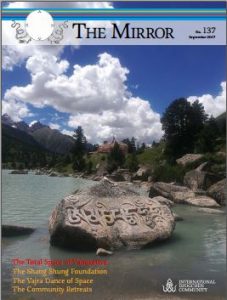 In the new Mirror PDF issue, #137,September 2017, you will find many articles of great interest, beginning with Rinpoche’s Teaching: The Total Space of Vajrasattva – Dorje Sempa Namkhai Che, oral teachings given by Chögyal Namkhai Norbu at Namgyalgar, Australia, November 2015, followed by in depth reports on the many activities of Shang Shung Foundation, including an interview with Oliver Leick, the newly appointed director, a report on the SSF All Hands meeting held at Merigar West in the summer and an interview with Kirill Shikov and Vladimir Balyaev about the activities of the Russian Shang Shung Institute with particular focus on the Tibetan Medical School directed by Dr. Phuntsog Wangmo.

Other news is from ASIA with an update on the earthquake relief in Nepal, a report on Khaita at the 50th World Congress on Dance Research in Athens, Greece, organized by the International Dance Council, and more recent information about the progress of the Gönpa at Dzamling Gar as reported to The Mirror by Giovanni Boni.

We are very happy to present a special feature of an interview with Prima Mai on the Vajra Dance of Space, Khalong Dorje Kar. Then there is news from the international Gars including reports on the Sangha Retreats held in Europe and Japan, a report on the first widely attended and extensive Yantra Yoga Teacher Training with Fabio Andrico at Samtengar, China, and summer programs at Tsegyalgar East with international instructors Laura Evangelisti and Prima Mai.

Tashigar North has sent a long awaited report, while Constance Ann Soehnlen describes her experiences on ongoing Kumar Kumari instruction for the children at the Ambrit International School in Rome, Italy.

This issue also offers an exciting travelogue with beautiful photos from the Shang Shung Institute UK’s trip to Tibet, Damien Pascoe tells his story as an Artist in the Dzogchen Community, an excerpt from a talk on The Four Applications of Presence, given by Santi Maha Sangha instructor Costantino Albini at Merigar West in July, and a wrap up with Martin Fernandez Cufre’s story of How I Met Chögyal Namkhai Norbu.