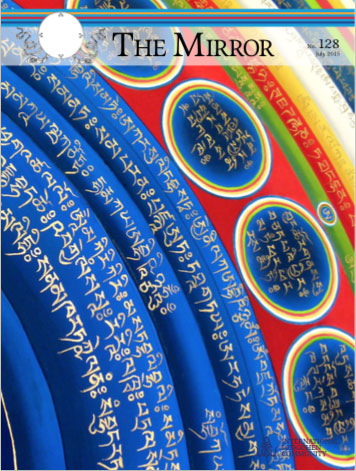 We are pleased to announce that our July issue, number 128, in now available at melong.com for downloading, viewing offline and printing out.

In this issue you can read one of Chögyal Namkhai Norbu’s teachings, Dzogchen is Our Real Nature, given in July 2014 in New York, as well as some essential advice he gave to the Dzamling Gar gakyil and the whole International Dzogchen Community during the Annual General Meeting at Dzamling Gar in Tenerife in April 2015.

Also in April two important Masters, the 9th Khamtrul Rinpoche and Tsoknyi Rinpoche, visited Merigar West where they gave teachings. Both of them kindly gave interviews to The Mirror that we present in this issue.

There is also a presentation of the translation project of the Drathalgyur, the All-Penetrating Sound Tantra, on which Rinpoche has spent so many years working, as well as Rinpoche’s moving comments on Tibetan culture during the recent launch of the third and final volume of his work Light of Kailash – A History of Zhang Shung and Tibet at the SOAS University of London in May.

The article Melamchi-ghyang – Jewel of the Hidden Land, written by Sharnon Mentor-King for The Mirror before the recent disastrous series of earthquakes in Nepal, gives a fascinating account, illustrated with some wonderful photos, of a meditation place of Guru Rinpoche and Yeshe Tsogyal in Yolmo that is little known in the West.

Readers can also peruse a detailed description of the art project, under the guidance of resident artist Migmar Tsering, for painting the tagdrol mandalas that decorate the ceiling of the newly built cinerary at Merigar West.

Then engineer Giovanni Boni gives a recent update on the development of the Dzamling Gar project with details on work on the houses and plans for the Gonpa and Health Center.

Our Artist for this issue who also recounts How He Met Chögyal Namkhai Norbu is Argentine painter and musician Mariano Gil.

In this issue our Focus is on Tsegyalgar and outlines the history of the North American Gar, the acquisition of Khandroling and the construction of the Mandala Hall, the birth of SSI USA and of the School of Tibetan Medicine, the stories of Kundrolling, the New York City Ling, of Kyungding Gar in Cazadero California, of Tsegyalgar West, of Dondrubling in Berkeley California, and of Pelzomling in Mexico City.