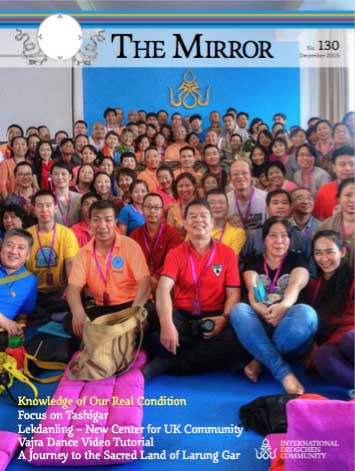 Happy New Year from The Mirror!

We are happy to inform you that the newest PDF, Mirror 130, is up on line at melong.com for your downloading, viewing off line and printing pleasure. This is actually the last PDF of 2015, so we can expect four more PDF’s in 2016.

This issue’s feature contains the history and current status of Tashigar North and South, the Gars, Lings and Centers of South America, filled with first hand accounts and photos of these two important Gars and their satellites. The Teaching from Chögyal Namkhai Norbu called The Knowledge of our Real Condition, is from Rinpoche’s public talk in Beijing, China, October 9, 2015. There is some important information from the IDC regarding membership and the registration and use of the new site: dzogchen.net, which all Community members may want to become familiar with.

There are updates from ASIA and the activity related to the earthquake in Nepal, from Dzamling Gar and Giovanni Boni on the progress and status of the newest member of the international Dzogchen Community family, an article and photos on the birth of Lekdanling, the dynamic new center for the Dzogchen Community and Shang Shung Institute in London, UK, photos and the story of the construction of the Stupa of Perfect Victory at Kunsangar North in Russia, an announcement about new publications from Shang Shung Publications of The Voice of the Bee and Mount Kailash, the Lost Kingdom of Tibet, and news from the Ka Ter Translation Project.

There is the poignant farewell story with photos of the sale of Namgyalgar South, Australia, the newest photo-logue feature of Travels Around the World with Chögyal Namkhai Norbu featuring China, Japan, Taiwan, Namgyalgar, Australia, Tashigar South, Argentina and Dzamling Gar, an article about the completion of the filming of the Vajra Dance Tutorial filmed at Dzamling Gar, a gorgeous travelogue from Sabina Ragaini of Larung Gar, Kham, Tibet, a book review of Great Living (In the pure Encounter between Master and Disciple) by Kemmyo Taira Sato, American Buddhist Study Center Press, 2010, a characteristically unique Reflection from Elio Guarisco on the nature of fanaticism, and of course, the traditional How I Met Chögyal Namkhai Norbu by Viki Forscutt, the secretary of Namgyalgar, Australia.

We hope you enjoy this issue!!!