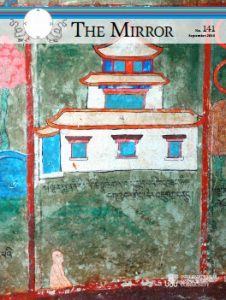 Inside this issue you will find a Teaching by Chögyal Namkhai Norbu entitled Guru Padmasambhava – The Tibetan Book of the Dead and Vajrayana – given in 2011 at the Tibetan Cultural Week in Tenerife, a moving eulogy to Chögyal Namkhai Norbu given by senior student Costantino Albini on October 3rd, 2018, at a ceremony at the Merigar West Stupa, and coverage of the honorary title of  ‘Commander of the Order of Merit’ conferred on Chögyal Namkhai Norbu on September 10th, 2018, in Arcidosso.

In addition you can read about news and updates from the International Gakyil and the Ati Foundation including information about a new online program developed by Kamil Selwa called Shedra –  Educational Program, an organizational presentation clarifying the role of the Ati Foundation, and a report on the future of public programming for the Community.

We also offer a glowing report on the marvelous concert by world famous concert pianist Roberto Cacciapaglia in August 2018 at Merigar West, news from the Shang Shung Foundation regarding Tibetan Language activity, new book publications from Shang Shung Publications, an extensive report on the Russian Shang Shung Tibetan Medical School graduation in the Qinghai region of China, (ex Amdo), a report from ASIA in the year of their 30thAnniversary the work dedicated to the Monasteries and Colleges for study and practice.

There is an interview with Elena Dumcheva about a recently published homage to Khaita, a lively pictorial travelogue about the recent journey to Tibet with Shang Shung UK by Lidian King, an October 19th, 2011 talk given by Elio Guarisco, ‘Merging With The True Self While Dying’ at the Tibetan Cultural Week in Tenerife, which includes photos of beautiful representations which were taken in the Chenrezig Lhakhang at Lamayuru monastery in Ladakh in September 2010 by photographer is Dorjay Angdus (Kaya) and which also can be seen on our front and back covers.

We present Community News from Dzogchen Gars and Centers around the world, and finally two personal stories of life as an Artist in the Dzogchen Community by Sofia Cacciapaglia and How I Met Chögyal Namkhai Norbu by Francesco Carpini.