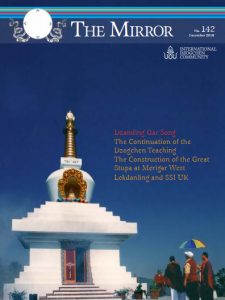 Inside this issue you will find a Teaching by Chögyal Namkhai Norbu entitled Dzamling Gar Song – this song was composed by Chögyal Namkhai Norbu during his stay in Tenerife at the end of 2012 on the occasion of the birth of Dzamling Gar,as well as an important message delivered by senior student and main translator for Chögyal Namkhai Norbu, Adriano Clemente, about the future of the Dzogchen Community.  Adriano gave the talk at the end of five days of explanations on the Master’s teachings on an ancient Dzogchen text, ‘Dorje Sempa Namkhai Che’. Previous to the five days of explanations, there was a two day Sangha retreat that began in the new Gönpa/Conference Center on Rinpoche’s birthday, December 8, and The Mirror offers a report and photos of that day.

In addition there is a seven page historical feature on the making of the Great Stupa of Merigar West, and a message of thanks from Merigar West to the Dzogchen Community regarding the activities at the time of Rinpoche’s passing. There is a special feature on the many activities of the UK Community, Shang Shung Institute UK and Lekdanling, in London, along with a talk given by Steven Landsberg in November 2018 at a Chöd retreat at Kunselling, Wales, written by Elizia Volkmann entitled ‘Drumming up Clarity’. Another feature of interest is an interview to introduce Dr Jordi Postius, a local doctor who Rinpoche agreed the Dzogchen Community should partner with in the creation and development of a Clinic of Integrative Medicine in the north of Tenerife Island.

We have a travelogue by Vicki Sidley on her trip to the retreat in Chengdu, China, reports and updates from Shang Shung Foundation and ASIA, a report  on the Tibetan Medical Program in Russia, important information on the Dzamling Gar Accommodation Service, an article and photos presenting the Eight Movements Teacher Training at Dzamling Gar with Fabio Andrico, a book review by Alex Studholme on ‘Dancing with Dharma, Essays on Movement and Dance in Western Buddhism’, many photos and some reports on courses around the world in Yantra Yoga, Vajra Dance, Santi Maha Sangha and Khaita Dances, a story by Jennifer Baird of being a visual artist and the relationship to the teachings and a moving piece on How I Met Chögyal Namkhai Norbu by Cinderella Pernia, someone everyone knows from Dzamling Gar.