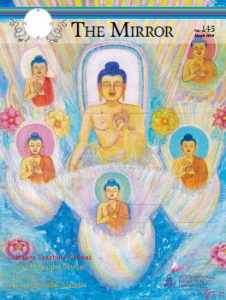 This issue offers an introduction to the teaching by Chögyal Namkhai Norbu from the first day of the Ati Yoga Retreat held at Dzamling Gar at the end of December 2017. In future issues we hope to be able to continue with teachings from this same retreat. This is followed by a message from the Santi Maha Sangha Instructors of the Dzogchen Community on Refreshing the Importance of the SMS, a program of study and practice created by Rinpoche in 1992.

Then there is an important statement about the relationship between the Shang Shung Foundation, Atiyoga Foundation and Shang Shung Publications that was signed in February of this year.

Shang Shung Publications presents three new releases including Rinpoche’s Longsal Teaching, Volume Ten, and also an appeal for English editors and translators to join their team in order to continue publishing Rinpoche’s teachings into the future.

The SSI School of Tibetan Medicine offers a report of the start of the Diet and Lifestyle program with Menpa Phuntsog Wangmo in Tenerife, while the SSI School for Tibetan Language and Translation announces their upcoming initiatives on Tibetan and Drajyor. ASIA Onlus presents details of the first six months of the Enrico Dell’Angelo Fund.

In this issue we feature reports from the eleven Gars of the Dzogchen Community around the world to bring our readers up to date on their activities as well as some of the challenges they are facing.

Following this we have a report by Doro Franck from the now traditional Mandarava Retreat held at Losar in Dzamling Gar, and a description by Nina Robinson on How to Make a Dadar, or ritual arrow, used in Long Life Practices.

The article Focus on the Primordial Masters, reprinted from The Mirror, issue 108, 2011, presents the Twelve Primordial Masters, the places and times in which they lived and the teachings that they transmitted. Our presentation is based on Chögyal Namkhai Norbu’s The Supreme Source and Ati Samten Gongdzöd. The images are from paintings depicted in the Merigar West gönpa painted by Dugu Chögyal, a spiritual Master and highly gifted and well-known artist of the Drugpa Kagyud lineage.

Vajra Dance instructor Prima Mai presents an article on Vajra Dance Global Practice Events including a calendar of World Dance Days, followed by the experiences of practitioners painting a Vajra Dance Mandala at the new home of Zhenphenling in Rome.

The Artist in the Dzogchen Community for this issue is Anna Diogene Fadini from Spain, while Emanuel Giachetti talks about How He Met Chögyal Namkhai Norbu.