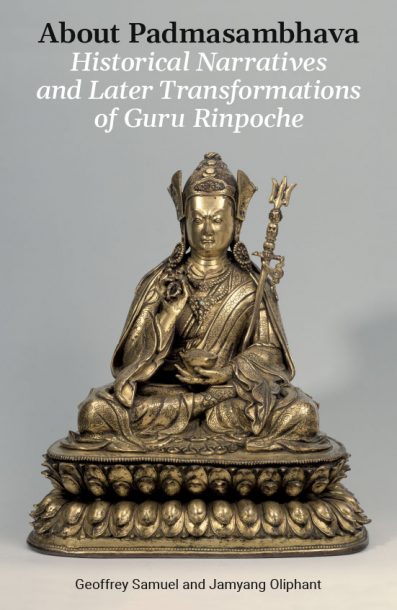 Edited by Geoffrey Samuel and Jamyang Oliphant of Rossie

For Tibetan Buddhists, Padmasambhava is both the mahasiddha who converted Tibet to Buddhism in the late 8th century and a kind of timeless Second Buddha, a universal spiritual principle even. “There is no manifestation of the Buddha that is not inseparably one with Guru Rinpoche,” Dilgo Khyentse Rinpoche once wrote, “and so to pray to him is the same as praying to all the Buddhas.” But what do we really know about his history? And how might a revised historical perspective affect our spiritual attitude? About Padmasambhava, is a collection of scholarly articles, edited by two members of the Dzogchen Community, that presents some of the latest academic research on this pivotal figure. For the devotee, its discoveries will be illuminating, but perhaps a little discomfiting too.

Devotion to Padmasambhava finds a contemporary setting here in an anthropological account of two lay tantrika communities, one in Mustang and one in Amdo, where the calendar of ritual practices is centred around the figure of Guru Rinpoche. The latter community, unusually, now includes more ngakmas, or female yogin practitioners, than male ngakpas, making up some five percent of the adult female population, or about 1,500 women. Nicolas Sihlé’s fieldwork stands apart here: the rest of this book is made up almost wholly of textual study, exploring the temporal origins and subsequent apotheosis of Padmasambhava within the Tibetan religious system.

The seminal version of the Guru Rinpoche story is, by common consent, the Zangs gling ma, or Copper Temple, of the 12th century hierarch Nyangral Nyima ’Odzer (and published in popular English translation as The Lotus Born). Most of the familiar elements appear in this work: the miraculous birth in the lotus, acceptance and banishment from the court of King Indrabhuti, the relationship with Princess Mandarava, the establishment of Samye monastery, and the gathering of a circle of 25 disciples, including the Tibetan king Trisong Deutsen. Like so much of the Tibetan literature about Padmasambhava, the Zangs gling ma is a terma, said to have been concealed by Padmasambhava’s Tibetan consort Yeshe Tsogyal, before being discovered by Nyangral, a self-declared reincarnation of Trisong Deutsen himself.

Surveying other terma texts here, Jue Liang discusses a hitherto obscure and undated biography of Yeshe Tsogyal, including many conversations with Padmasambhava; Martin Boord translates a section of a 17th century biography, in which Padmasambhava’s life is aligned with the traditional twelvefold deeds of Shakyamuni Buddha; and Cathy Cantwell examines a 13th century text called the bLa ma gsang ’dus, or Secret Embodiment of the Lama, of Guru Chöwang, the second after Nyangral of the so-called Five Terton Kings of the Nyingma school. This is an important repository of many well known practices connected to Padamasambhava, including the famous scheme of eight different manifestations and the ubiquitous seven-line prayer. Meanwhile, Jamyang Oliphant concentrates primarily on terma texts to demonstrate the significance of Padmasambhava to the medicinal and spiritual practice of bcud len.

It is when the scholarly gaze turns to sources from before the time of Nyangral’s Zangs gling ma that things become more problematic, essentially because there are very few of them and because the figure they describe is not necessarily the pre-eminent being of later tradition. In this volume, we see three experts on the historical Padmasambhava – Jacob P Dalton, Robert Mayer and Lewis Doney – grapple with the evidence of texts from Tun Huang, the vast library on the Silk Route that was sealed up at the end of the 11th century and not opened again until 1900. From all the many thousands of folios, only four of these texts have been found (so far) to refer to Padmasambhava, a striking enough statistic in itself, given his eventual supreme status.

This is a painstaking business, involving difficult translation work, nuanced interpretation and command of a mass of detail. Suffice it to say, here, that the results of this research are often hotly contested. Scholars range from those who insist we can assert virtually nothing about the historical Padmasambhava, to those who claim they can already discern in these early works an extraordinary and highly influential mahasiddha. The conclusion is inescapable, though, that the picture of Guru Rinpoche in the termas is, to some degree or other, a construct, leading to fraught concerns about those texts’ historical reliability.

This issue is nothing new: the Tibetans have argued about it for centuries. James Gentry looks at how the 17th century lama Sog bzlog pa attempted to rationalise different terma accounts of Padmasambhava’s life with the record found in the dBa’ bzhed, or Testament of Ba, an historical chronicle that may go back to the 9th century. In a similar vein, Lama Jampa Thaye reveals that though the Sakya school boasts a Vajrakīlaya practice transmitted by Padamasambhava himself, this hallowed provenance was actually kept secret for many generations due to a climate of suspicion surrounding the Nyingma school.

The academic treatment of Buddhist texts often raises difficult questions about the relationship between history and myth. As is sometimes apparent in these pages, scholars can be wary of airing their findings in front of practitioners, for fear of being seen as unsympathetic towards cherished beliefs. But many of the contributors to this volume are both scholars and dedicated practitioners (one is a lama). And the questions they raise cannot simply be ignored or wished away. The answer for practitioners is surely not to retreat either into anti-intellectual fundamentalism, or into hyper-rationalist humanism. A balanced view may, perhaps, begin in an appraisal of what is meant by the “religious imagination”, seeing it not as the fabricator of fantasy and falsehood, but as a vital creative faculty, which both expresses, and serves as a conduit to, spiritual truth.

About Padmasambhava is dedicated to Chögyal Namkhai Norbu and also to the memory of Judy Allan, who was one of the organisers of the 2013 Shang Shung Institute conference on Padmasambhava in London, where some of these papers were first presented.