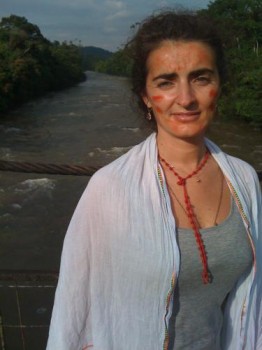 I’m three years old and at the nursery, and to the classic question ‘What do you want to be when you grow up’ I answer without hesitation, “A painterperson.” This is perhaps one of the first things I have in my memory.

From that moment forward I never had any more doubts, second thoughts or distractions to this knowledge about what I was going to be. It was like recognizing my real skin, and then they say it’s very lucky knowing what you want to do when you grow up …

I was born in Grosseto, Italy and raised in Milan and my family has never hindered my artistic inclination.

My teenage years were not very carefree – in the early eighties Milan was pervaded by a gloomy stagnant atmosphere, in the schools not only were there a lot of drugs circulating, but they lacked cultural stimuli, we were not taken seriously, perhaps for fear of being ridiculed, and in almost all the schools there was a strong urge to quit. I was living with my dream of moving to New York to be an artist.

In the meantime I studied at art school and the most wonderful hours were those spent at the easel in drawing and art history classes. I was infatuated, and am still, with Giotto and Van Gogh. Van Gogh in particular is the only artist who, for some special reason, manages to bring me to tears in front of one of his paintings, a strong expressive power conveyed by an almost scientific order in dividing the color through all his strokes, destroying and building up over and over again.

After art school I tried to enroll at the Academy of Brera to study painting but the office was always closed due to union strikes and in order not to lose the year I enrolled at a private university to study illustration.

I have illustrated children’s books for 10 years, working fortunately for a British publisher because in Italy “people don’t read much” … and finally after all these years of “distraction” with a bit of courage I dived into painting, learning the techniques on my own, inventing and experimenting and integrating also my valuable experience in illustration with its attention to detail. 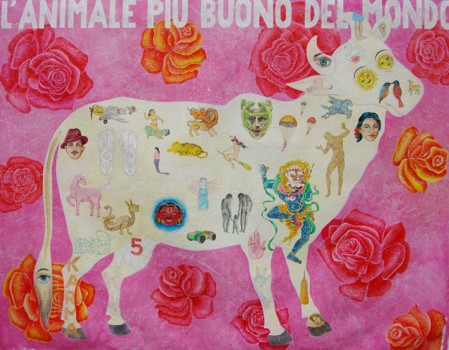 I’ve never been part of a trend or a movement, and every time a group was generated by a collective exhibition, for a short period I would happily be part of it and then life would take me back to my solitary research. It’s funny how I continued to be like this, to be alone in my research and at the same time felt very much at ease with other artists that I met, a feeling of belonging.

In general, we artists have a very pronounced ego, but that does not detract from the genuine need to share that is created by the solitude necessary to produce something.

I met Rinpoche in ‘95 and in ‘97 I left for the United States. I remember a retreat just before leaving. I was very afraid because of the unknown factors waiting for me in this drastic life change, and as often happens with Rinpoche in his teaching that day there was a phrase I heard that was particularly relevant to my situation because it encouraged me to travel, to leap into the unknown, an adventure in the name of new experiences. It was something I strongly needed and everything fortunately turned out to be productive.

In my work discipline is essential, especially when I don’t have a deadline dictated by a client and I paint for myself. The inspiration is there, alive and vibrant, but often followed by emotions that exhaust and tire me out – paradoxically, the stronger the emotion the stronger the desire to run away from the canvas. I still don’t know how to explain it, it’s a sort of euphoria that comes over me and wants to put off the moment. In this sense, discipline is important because it’s what makes me go to the studio every day and trains me to keep my feet on the ground.

Inspiration is like a horse that needs to be tamed. At times the work itself is even more important than the inspiration while the most wonderful aspect of it is that you never know where it can arrive. I’ve learned that the sources of my inspirations have no limits: a trash bag, a piece of mozzarella, a dog barking, a bit of rusty iron, some wind, all of these things can evoke and be the source for an idea. 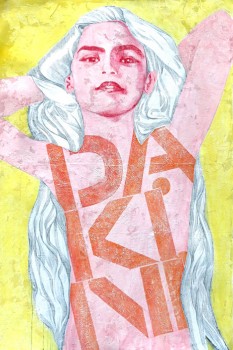 Only when ambition leads me away from intuitions, then the sources are exhausted and thoughts are focused. It’s part of the game – things don’t always go smoothly.

In my search I’ve always had a fondness for symbols and when I met the teaching the symbol became even more evident. They are a mysterious and refined language that at times go deep and have an effect, at other times they remain on the surface without telling a story for years and then suddenly shoot from the unconscious to produce an awareness.

Everything in reality that surrounds me is essential, but I do not always succeed in integrating everything in the painting. I do what I can to bring the experiences within myself and my own self to the canvas, and the more experiences I have the more I realize that, for the artist, honesty is the first thing to be respected.

What I mean to say is that, over the years, succeeding in discovering what you are and what you want to transmit on the canvas, also keeping in mind the changes and developments, if there are any … and following this trend, this connection, that you find in the silence, in the pauses, and afterwards painting following this trend, this is what makes me happy and satisfies my artistic taste, and makes me forget the need to be recognized by others which is, at times, pathological.

This is an honest approach to art.

It’s a very daunting task, but the rewards are wonderful because when you succeed in this your DNA gives you a round of applause! 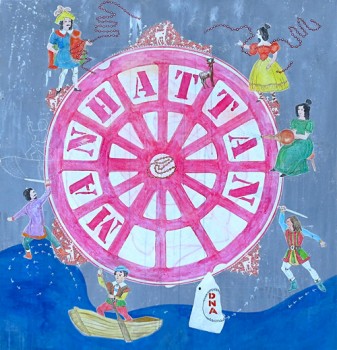 I know that from the time that I had the idea that I would be a painter at three years of age I have been very lucky. But now I also know that painting and being an artist involves a perception of reality and of people that is sometimes exaggerated.

You are exposed, vulnerable, so you need to become strong, to know how to defend yourself while keeping the channels open and as pure as possible and maintaining your clarity!

This is all theory because in practice I emphasize that I do what I can and sometimes when I lose my balance it is always comforting to know that I fall into a boat.