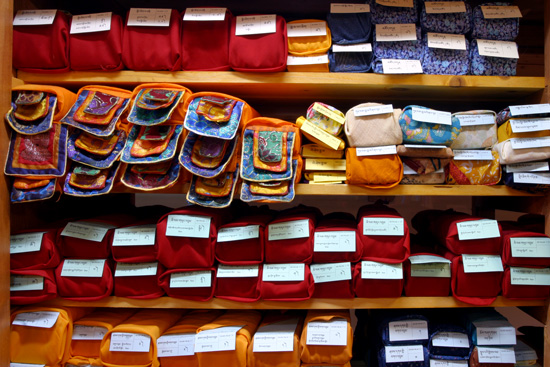 The traditional Tibetan Pecha format. All photos by Magda Zych

Many of you may have been to see us during the summer and the various retreats held at Merigar and discovered the library and the treasures that are kept here – from the works of Changchub Dorje, that we finished scanning in 2013, to the publications of Shang Shung Institute, from thousands of texts in Tibetan, collected mainly by the Master, to the many thousands of works in Western languages ​​that cover teaching, art, medicine, language, history and all other aspects of Tibetan culture. Many of you have asked to visit the library and its treasures, looked with devotion at the works of the Master and of Changchub Dorje and deepened your knowledge regarding traditional Tibetan texts, the language and the different types of writing. Many people have stopped to read, study, and broaden their knowledge of specific aspects of the teaching and Tibetan culture. Each of you has certainly had this experience among their memories of Merigar. Now the library is open!

The library was originally created from the need to preserve the texts that the Master brought with him from Tibet and the works that gradually became necessary for his studies. Hence what was and is essentially the personal library of Chögyal Namkhai Norbu is now accessible to scholars, practitioners, and also to those who are simply interested in some aspect of Tibetan culture. There are not many libraries like this in Italy and even in the world so it was only fitting that this treasure was developed and made available. 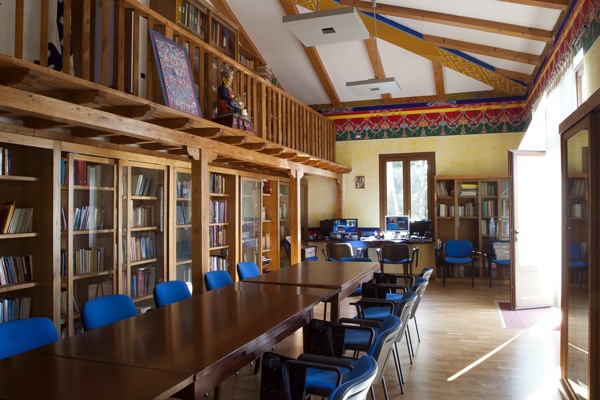 The skillful renovation work of 2012 brought about larger rooms that were comfortable and pleasant. The reading room is decorated in Tibetan style and overlooked by a statue of a contemplative Guru Rinpoche, while the new surrounding shelves display works that deal with different aspects of Tibetan culture in various Western languages organized by topic and available for consultation.

For the section of texts in Western languages ​​the main idea was to order the texts according to the Five Traditional Tibetan Sciences (rig gnas lnga): the first part focuses on the Dharma, the teachings, in turn divided into Sutra (Hinayana and Mahayana), Tantra and Dzogchen and then into different Tibetan schools (Bon, Nyingma, Kagyu, Sakya, Gelugpa etc) with a section on biographies. The second section is on Tibetan language and grammar, followed by a section on medicine and the arts (visual arts, music, dance etc) and a small collection of texts on Logic. In addition to these five sections divided according to the five sciences, we have a section on places of pilgrimage, and a shelf dedicated to India, Nepal and Mongolia. There are also sections that contain scholarly works (such as a large collection of East and West magazines and other publications from IsIAO / IsMEO in addition to Tibet Journal) and one with the works of authors of the Dzogchen Community. Sections on Chinese Buddhism, Zen and China in general will be exhibited later in new shelves. 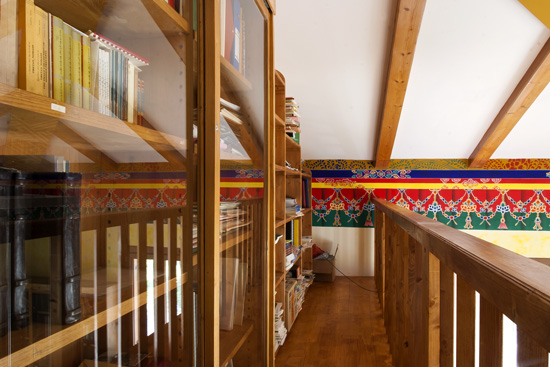 From the reading room you go up a wooden staircase to an area overlooking the reading room which houses manuscripts and texts of the Master (many of which have already been scanned) and his works published in Tibetan. There are also texts published from the early years of the Dzogchen Community and by Shang Shung Publications, with areas dedicated to their translation into different languages ​​(English, Italian, French, German, Spanish, as well as Polish, Czech, Russian and Greek).

The upper floor continues into the area of Tibetan texts, which houses the main collections of the various traditions of the Land of Snows, such as the Bon and the Buddhist canons, the Tantras of the Ancient School, the fundamental texts of Dzogchen, the complete works of Longchenpa, of Adzom Drugpa, of Shabkar, and of Lopon Tendzin Namdak as well as a section with the manuscripts of Changchub Dorje and those of the Master. The sub-division here has firstly taken into consideration the size of the texts. More than 2,000 works are in traditional Tibetan format (dpe cha), namely woodblock prints or manuscripts, or copies of them made on paper made from different organic materials depending on the location and time of production. 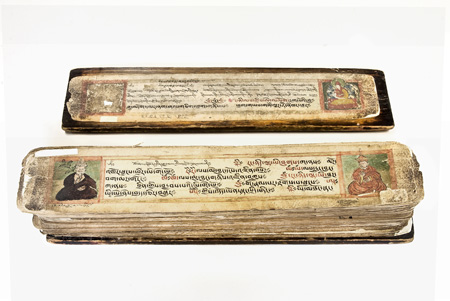 These texts generally consist of unbound sheets that are rectangular and read horizontally. The page is changed by turning the sheet on the upper horizontal pivot (which means that the back of the sheet has to be upside down in relation to the front). Since they are not bound these texts are wrapped in squares of cloth (dpe ras) with cloth strings that guarantee the compactness of the text and its preservation. In our library, many of these fabrics have been brought directly from Tibet or from the areas of the diaspora, in India; others were produced locally.

All this patrimony has been in the phase of being reorganized and cataloged from the summer of 2012.

The cataloging started with the Tibetan texts. The texts in the traditional format (dpe cha) were ‘stripped’ of the fabric in which they were wrapped, then studied, and placed according to the school of origin and content. They were then cataloged, wrapped in the fabrics that had been gradually cleaned and provided with highly descriptive labels. The more than two thousand books were divided according to the school to which they belonged with appropriate sub-categories (authors, genre etc), Dharma history and biographies (chos’ byung and rnam thar), history and law (lo rgyus and khrims yig), places and local deities (gnas yig, gnas bdag), the Epic of Gesar, Medicine (gso rig), Astrology (rtsis), Grammar (sgra rig), Art and Architecture (bzo rig), and Logic (tshad ma). 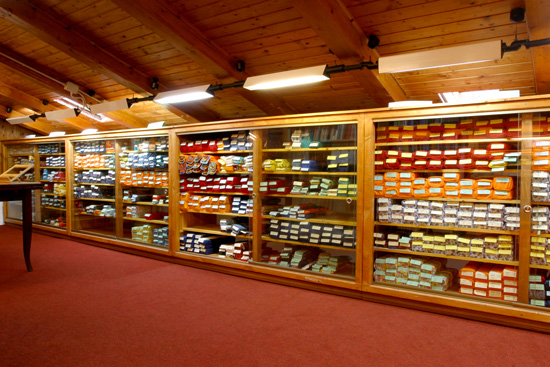 The use of fabrics of different color now makes it clearly visible where a work (which may be composed of several volumes) finishes, while the color of the label changes depending upon the topic. The cataloging of texts in traditional Tibetan format (dpe cha) was completed in August of 2014. Some months were then devoted to cataloging and photographic documentation of the original manuscripts. Besides the works of Changchub Dorje and those of the Master another 39 manuscripts (plus handwritten notes contained in eight texts of woodblock prints) whose dating and origin is still under study are kept in the Zikhang library. Most of these works consists of copies (namely reproductions for the purpose of preservation) produced by more or less experienced copyists. Among the manuscripts are mostly texts from the Bon and the Nyingma traditions (among the most valuable works there is a volume containing the works from the terma of Longsal Nyingpo named Ye shes rab ‘bar and another containing texts on the Zhikro) on medicine, astrology, and more. Some of them contain miniatures, others have special seals or affixing fingerprints.

At the moment we are proceeding with the cataloging of the bound Tibetan texts. At the end of August 2015 we have a total of 3195 volumes! 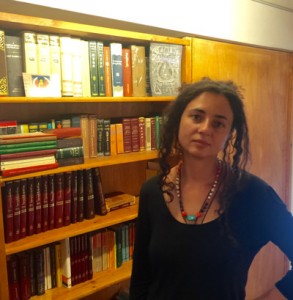 In the catalogue only the texts of the Tibetan section are available at present. Expanding on the previous inventory, in addition to the title, the author’s name and the number of pages, the new catalogue is enhanced with reference to the codes assigned to the same work by the Tibetan Buddhist Resource Centre (TBRC), the largest online library of Tibetan texts, and by the Library of Congress. This makes it possible to search through the catalogue also using a single code used by the TBRC and the Library of Congress. It also generally provides a brief description of the content and keywords; where necessary the table of contents (dkar chag) has also been entered. You can request partial scans of the texts by contacting the librarian, Margherita Pansa m.pansa@shangshunginstitute.org, who can also guide you in visiting the library and library research.

The library is open and everyone can come to visit and see the texts. There is also a loan service for most of the texts on display in the reading room for those staying longer. So if you are at Merigar, resident or passing through, come visit us!

Join our work and support the cataloguing and accessibility of the Zikhang Library. Make a donation today using the following link: http://shop.shangshungfoundation.com/en/content/14-free-donation