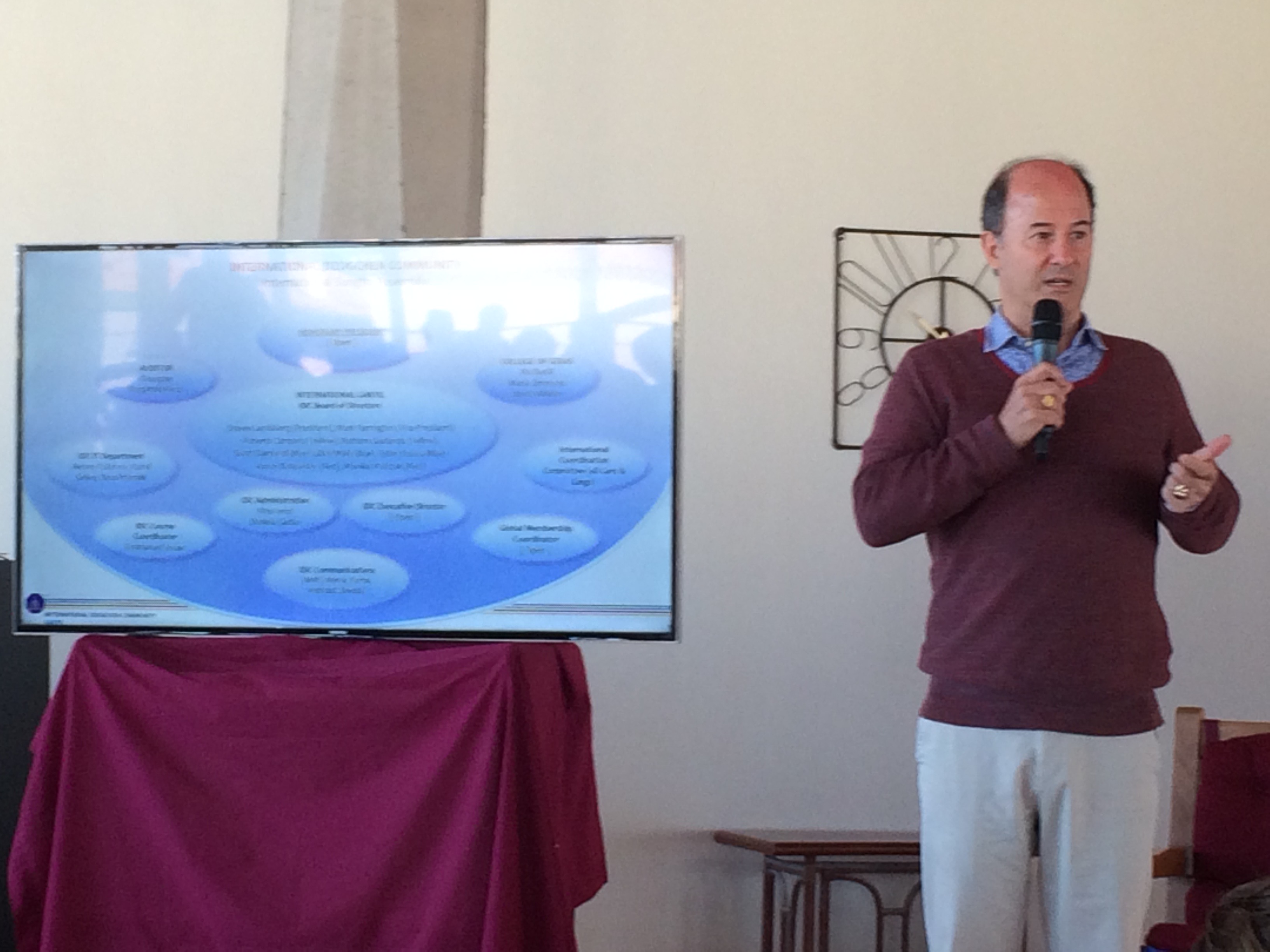 In the past, we always started the AGM with opening remarks from Rinpoche, and he gave us that spiritual leadership and guidance, so we were very grateful that we were able to receive that today from Steven Landsberg and Costantino Albini. Now we go into the purely relative and mundane world of reality, which is how do you structure a legal organization, how do you make rules and regulations to hold this organization together, to comply with the law, and all these things which are not so easy to do, with the Dzogchen view with no limitations and total freedom.

So keep all those nice images alive that you just heard from Steven and Costantino as we dive into the details, which are not so beautiful and spiritual sometimes.

We have an agenda here for you today. We will go through some of the legal alignments, the membership trends, we will review last year’s financial budget, and then ask you to vote to accept the financial accounts. We will talk a little bit about the 2019 budget, and the plan, and we will then tend to some legal business at the end, where we would like to propose some legal modifications to the legal statutes to allow us to continue to function, and then to introduce the three new IG members who are joining from today. We have three IG members who are retiring today and three to introduce to you.

So I will remind everyone that this slide is the organizational slide that we have always shown. 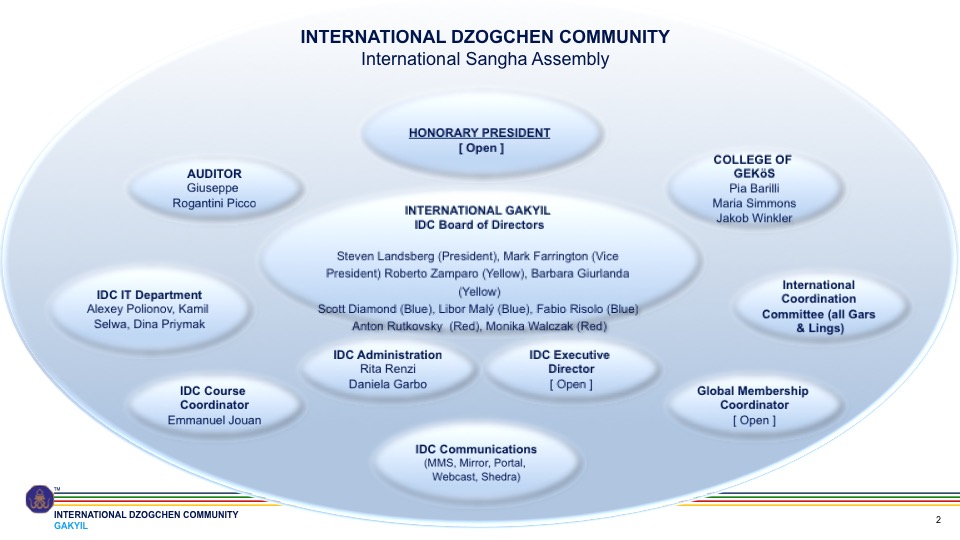 So this is the relative, legal organizational view of this boat or this container, for the Dzogchen practitioners in the transmission, which of course Costantino alluded to. So the way this structure has always been designed, of course, is with the honorary and spiritual master at the top, Below the honorary and spiritual master is the IG. We will talk about the statutes again at the end, but just to remind you briefly, Rinpoche was the president, so he had a direct legal responsibility in the International Dzogchen Community. We realized that was not particularly advisable because the president of a legal organization has legal liabilities. So Rinpoche’s position was converted into an honorary president in 2016 so that he would be shielded from that external liability. Nevertheless, we wrote in all the international statutes a number of powers and oversight rules for this honorary president.

In addition to the honorary president we had two other elements of oversight. One is the College of Gekös, the College of Gekös was meant to be a sort of council or elders, where we chose Dzogchen Community members who had been students for a very long time, who knew Rinpoche’s teachings and vision very well, understood the behavior that was expected of members and practitioners on the Gar, as the Gekö represents in each Gar, and would then advise the IG and also represent each one of the members if there was ever a challenge.

We converted ordinary Western legal language to our own language so that it would be familiar to everyone. So we used this term gekö, but in Western language it would have another terminology.

On the left is the term auditor and we did not convert this into Dzogchen phraseology, we just left it as it is because it is an external person. So the auditor is a paid, external professional service that we pay for and they audit the financial accounts, our actions and they insure that we are behaving according to our statutes, according to our mission statement, etc. This individual has been our auditor for two or three years, and most of us probably don’t know him but he is performing this role for us. 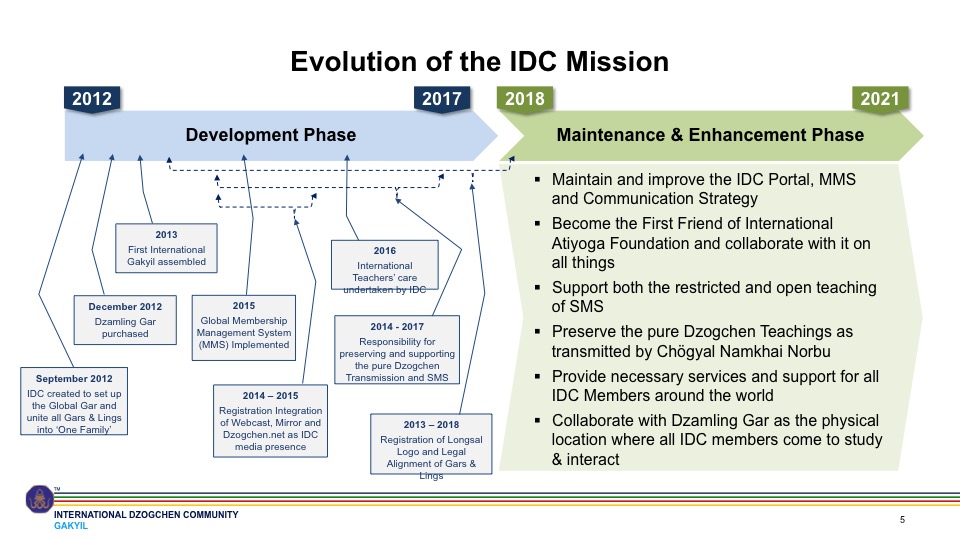 We are a flat organization, so you will notice that we draw no lines of hierarchy; it’s just floating bubbles here really. Nevertheless, the coordination with the IG takes place along the bottom. So we have the International Coordinating Committee, which happened yesterday. This is the opportunity for all Gars and Lings to send a representative to come to the AGM and to train with the IG, can ask the many questions that have arisen in the last year that have not been clarified, and to help give bottoms up input to senior Gakyil members who have to think about the future. This is a very important bottoms up form of information, and you can understand how necessary this is when you think we have eleven Gars, fifty some Lings, and we are active in almost seventy countries. So if you don’t have this bottoms up information from the Community, it’s really impossible for nine individuals speaking on Zoom or Skype every Sunday to try and understand what this Community needs. Please in the future pay respect to this role as much as you can, it’s so important to understand what is the reality at the Gar and the Ling level for the Community.

On the far right we have the IDC technology department. To be fair this department was always one person, Alexey Polionov, who is not here today. But he devoted so much time to the Community over the years, to program, to build MMS and to be our one-man karma yoga technology person. We should all be grateful to him for the work he did in the past. But now we have a few more people like I mentioned yesterday with Anton Rutkovsky joining the IG, we had a big lift in terms of our resources in terms of the IT department. We temporarily added Kamil Selwa to this department while we were working on the Shedra launch, and Dina Priymak who has been a fantastic support in helping Shedra, have a chance to succeed because she has been customer support, she has been speaking to all the Gakyil members and course organizers and trying to help them learn how to use and code the system. So I imagine in the future that department will grow over time and it was fantastic we were able to raise this money at this retreat to help finance their activities.

Below that we have this role of executive director, and for those of you who worked on the rewriting of the statutes at the Gar level, we requested that everyone insert this position in their statutes, but in fact we have never used it. This is borrowing from the non-profit world where normally you have a paid salaried position for executive director, who takes all the management responsibility for running such a complicated organization, so that the Board can simply function as an oversight Board. And to be honest, the Dzogchen Community would fit that role much better, because most of us are here to focus on the Dzogchen Teachings and deepen our practice and yet we want to do karma yoga and we end up in these positions that are actually like a full time professional job.

If we had the financial resources, what Enrico Dell’Angelo always envisioned was that we would have this paid position and this person would run the day to day activities and only refer up decisions to the IG for oversight and understanding of the legacy and the mission and helping to advise. We never had this position but in the beginning I performed this role, but only as karma yoga and we simply just never had the resources to pay for this position. The idea was that if membership was to rise to 10,000 instead of the 6,000 that we started with, that one day we would be able to afford that position.

Also something to think about for the future, Atiyoga Foundation will understand the demands of that position very well and who knows, maybe there can be some overlap where they can help each other and share the cost of such a professional.

Administration, the one position that we did pay for historically was for a secretary because we are a virtual Gakyil located in five or six different countries and only connecting by Skype or Zoom on the weekends, and the secretary was someone located in Arcidosso and managed all of the legal affairs, the banking and the notaries, and received the mail, etc., for us. Our registered address was Merigar and Arcidosso so we had one physical person. That secretary eventually resigned and left and so Rita Renzi has been doing this position as karma yoga for the last three or four years. It’s a very heavy job and we are always grateful to her for her sacrifice and her offering. 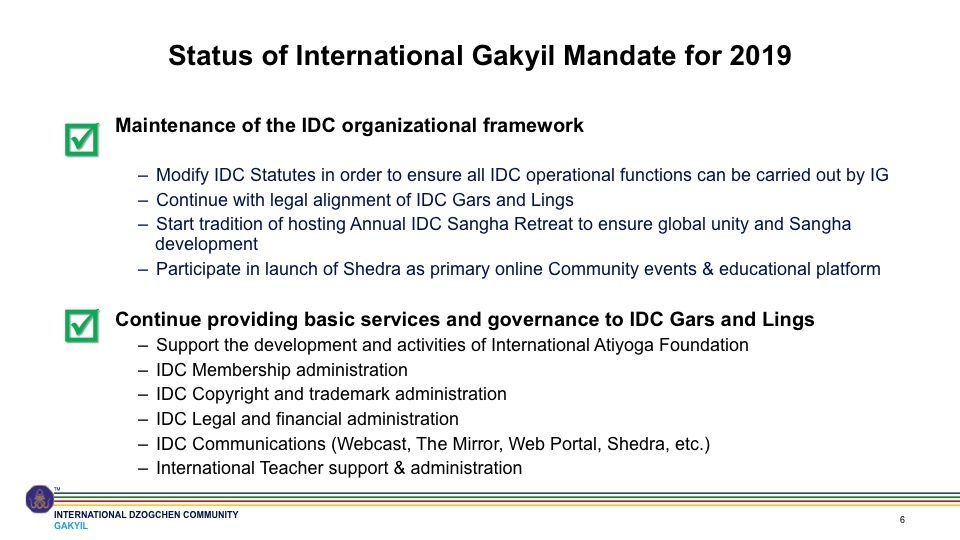 And then the position of Global Membership Coordinator was performed for a short period by Nikol Stanišová, who was the secretary here at Meriling and the gekö at Merigar West, you all remember her. It’s also an important role and as the system gets more and more developed, it becomes very self-explanatory and users can understand by themselves how to use it, so perhaps this role is not necessary. But this role is to coordinate the membership coordinators at all the Gars and Lings. If we had the same membership coordinator in place every year, I think this would run itself without any effort. The problem is the Gakyils actually change every one, two or three years, and we are constantly having a new person coming in to this role at all the Gars and Lings. They don’t understand, so this Global Coordinator became very important to educate and train this turnover at the Gar and Ling level.

If this system becomes self-explanatory and with the help of people like Dina, who are like an online customer support person, that a professional web portal would have, maybe they can perform that role. At the moment this role is empty and if anyone is interested in this position, please try and volunteer to work with the IG because we would still like to have someone in this role to help us with this membership system.

Finally down here we have what is called IDC Communications. MMS, the membership system, The Mirror, the website and Shedra, and the Webcast. We think of all of these as our communication channels; the way we disseminate information to the whole Community, the way we update them on events and happenings and also for them to contact us. So this IDC Communications is essential for holding an organization like this together. The main components of that are The Mirror and the Webcast, but the other areas are also very important.

Lastly we would like to thank Emmanuel Jouan, he is always invisibly in the background helping with the organization and course coordination. There was not a lot to do in the last year, so there are not a lot of particular issues to report, but Emmanuel has always been there to offer his support should any problems arise.

So this is the organizational structure, these are the roles that everyone has played, and it is useful to keep that in mind as Atiyoga Foundation begins to emerge, with this eco system they showed yesterday, and you will see there will be overlap in different areas with us.