The Ati Yoga Foundation (ATIF), founded by Chögyal Namkhai Norbu, is the umbrella for all the organizations in the International Dzogchen Community and was created with the intention to support all activities related to Rinpoche’s legacy interfacing with the world. Rinpoche appointed Marco Baseggio as president and legal representative of the Foundation with its headquarters and legal address at Dzamling Gar.

ATIF is a cultural Foundation, with the aim of supporting the evolution of the individual, thanks to the legacy and the cultural heritage of Chögyal Namkhai Norbu, through the different cultural forms or areas of the mind that Rinpoche developed during his life.

The Foundation’s statute was formally approved by the official registry in Madrid after a long formal process. It is legally composed of three founders: Rinpoche, Nancy Simmons and Carlos Ramos. The Board of Directors consists of Pia Bramezza, who has been in charge of accounts at Merigar for many years, Alex Siedlecki, Director of the Museum of the Asian Art and Culture in Arcidosso, and Oliver Leick in charge of the Ka Ter Project and the coordinator of Shang Shung Institute within Ati Yoga Foundation. Rosa Namkhai has been fundamental for the creation of the Foundation, and also Yeshi and Yuchen Namkhai, and the direct and continuous connection with the Namkhai Family is very valuable and has allowed the Foundation to work with serenity and a sense of responsibility.

In December of 2017 Rinpoche first spoke publicly about the new Foundation during a webcast. Before that we had studied how to legally formulate this situation. In February 2018 during Losar Rinpoche and the two other Founders of the Ati Foundation signed a document for the creation of the Board of Directors. In July 2018 we officially signed the constitution of the Ati Yoga Foundation with Rinpoche. In November 2018 we signed a new publishing agreement with the heirs of Chögyal Namkhai Norbu, and Yeshi Namkhai signed an agreement with Shang Shung Foundation, which still exists. Then in December of 2018 we received official approval from the Protectorado of Madrid, and are now a legal public institution and can receive donations etc. We presented our action plan for 2019, obliged to do so under Spanish law.

Then in January 2019 we started to work on the accounting plan based on self-sustainability, transparency and traceability. We are still working on this very important project, which represents one of the main issues of the Foundation.

In February 2019 the new Board of Shang Shung Foundation and Shang Shung Publications was created, which are totally connected with the Ati Yoga Foundation because three members of the SSF Board are part of the Ati Yoga Foundation Board: Pia, Oliver and Marco. The other Board members are part of Shang Shung Publications: Giovanni Totino, the manager of SSP, and Artur Skura. In the future SSP will become a profit making company while SSF will remain as a branch of ATIF in Italy, managing the archive and library, not only for Italy but for the Dzogchen Community all around the world. For several reasons we decided to maintain the legal form because it is very useful.

ATIF’s values of self-sustainability, transparency and accountability, efficiency and diligence, co-creation and collaboration, respect and dialogue are used as a framework for all activities undertaken. These values are based on the principles of interdependence and respect among individuals and groups, not only in the Dzogchen Community. To give an example: in December 2018, ATIF had to present an action plan for 2019 to the official registry. That meant that we had to think for the whole year’s program. In order to present that we had to be transparent from the beginning, and everyone willing to collaborate and present their project in the action plan had to make them self sustainable: they had to think thoroughly what they wanted to plan, what their activities would be, who would be carrying out the plans in terms of people, what money they would need, and they had to make sure they could get all the funds to cover it. Then they will have to keep on reporting and, at the end of the year, they will have to be accountable for that because we have to show the Spanish registry of Foundations that what we said has been fulfilled and if it has not been fulfilled we have to show, with evidence, why it did not happen. In order to do that we have to be efficient, collaborating and dialoguing so that all the funds we get we can invest in a clever way in order not to waste people’s precious time and generosity. 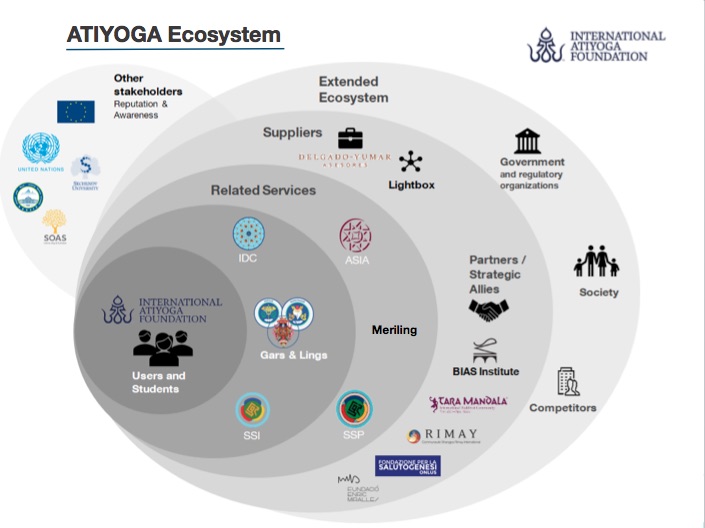 So that is the base. We should do that with a series of activities, which are mainly divided into two macro areas. One of them is building and sharing competence so that means learning, learning how to do things, supporting individual capacity, providing guidance, advisory and consultancy, and, on the other hand, by doing projects and organizing activities, coordinating projects, promoting inter cultural exchange through the various organizations that Rinpoche founded, but also other entities with similar interests.

Ati Yoga Foundation by its nature is a cultural foundation and the instrument of the Dzogchen Community. On the other hand the IDC has the commitment, according to its own statute, to preserve the lineage and the pure transmission of Chögyal Namkhai Norbu by organizing events for its own members primarily. The Dzogchen Community is the repository of the Teaching that Rinpoche gave us, which required transmission, while the Ati Yoga Foundation is in charge of open teachings, open courses and open activities. What are the activities of the Ati Yoga Foundation? There are many.

All the activities of the Ati Yoga Foundation are carried out by the following branches: 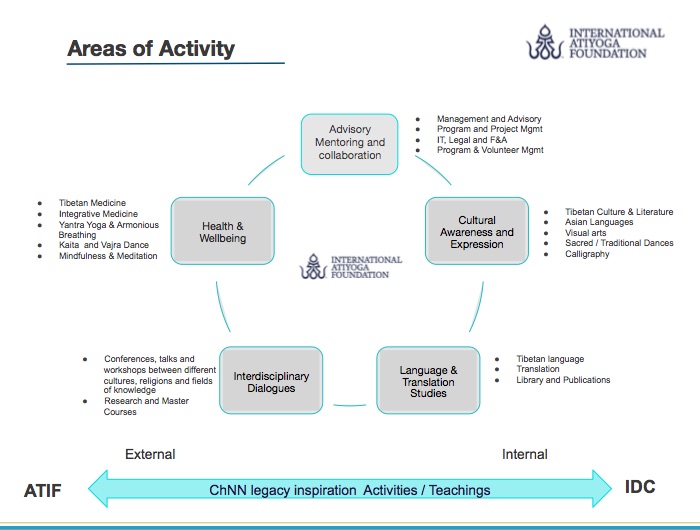 The Ati Yoga Foundation has close connections with all the branches of the SSI around the world, the Gars and Lings we collaborate with to create public events, the IDC with which we share many things, ASIA, and SSP.Then there are allies in the forms of suppliers, and Governmental allies, the link with Tara Mandala and Rimay, more local organizations and also the European Union.

Just like when we first began Dzamling Gar, the Ati Yoga Foundation is still something we have to project for the future. It’s up to all of us to make this happen and there are things we need to concretely work on:

It is very interesting that Rinpoche created this activity before he passed into a new dimension. We should all think about why, and to try to find together a good path to the future. This cultural foundation is really a very useful instrument for us.