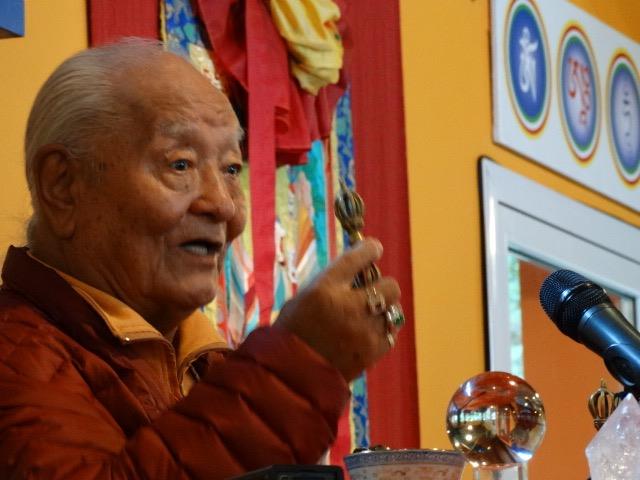 Ati Yoga was the name given to the Conference the Master offered for the second time at the Cordoba National University, opening thus the room for the presentation of the Spanish edition of the book “Tibetan Yoga of Movement – the art and practice of Yantra Yoga”, which Fabio Andrico presented with a brief introduction of this discipline. Making an analysis of the meaning of the term “yoga”, the Master remarked that in Sanskrit the term refers to “union”, while its translation to Tibetan, naljor, refers to knowledge; more concretely, to possess the actual knowledge of our own natural condition, the self- perfected condition of Dzogchen. 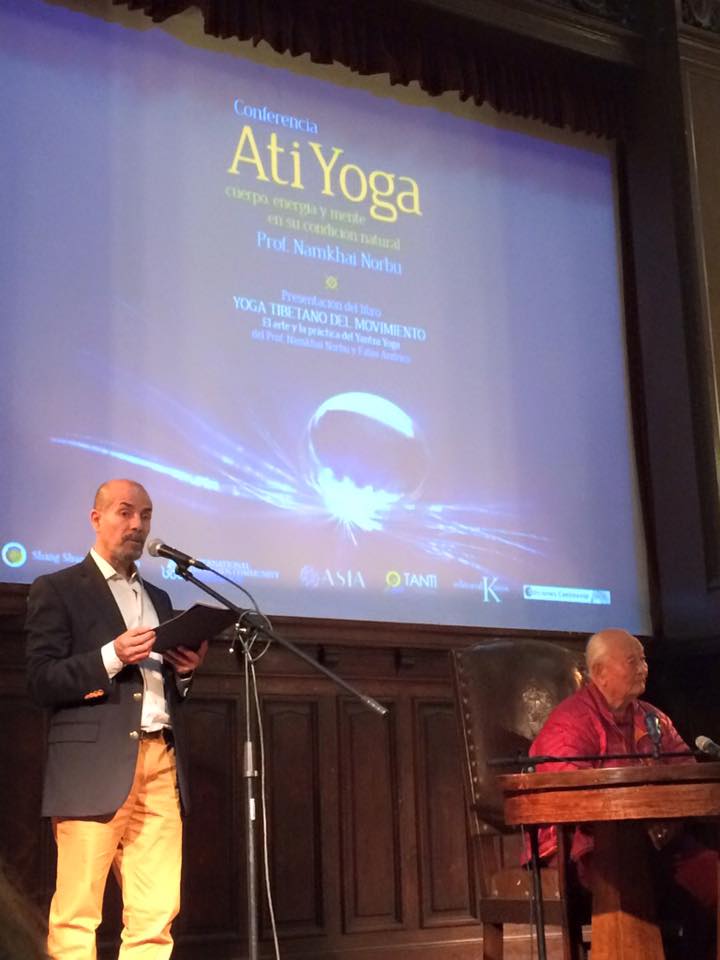 Author introducing Rinpoche at the Public Talk in Cordoba

Ati Yoga was also the title of the teachings given by the Master during the retreat of Tashigar Sur. Interestingly enough, the intensity of the teaching was such, and so many things happened, that we had the feeling of being in another dimension of time, in which the hours lasted as long as necessary so that everything was able to occur.

During that time, the Teaching of the Master was an extraordinary Santi Maha Sangha synthesis, and nothing was left out to explain. Thus it became clear that the title of the retreat had a perfect relationship with its contents, in the sense that, although it is often replaced by the term Dzogchen, Ati Yoga is referred specifically to the ninth and supreme vehicle for realization, the path of self liberation, whereas Dzogpa Chenpo is also the name given to the final goal of the Anu Yoga, as it is explained in the Base Level of the Santi Maha Sangha.

Regarding the vehicles, Rinpoche remarked that a commentary of the Dra Thal Gyur tantra was recently found, and that after having worked on this document for six years he discovered something very important: it is said in the tantra that Ati Yoga is the ultimate goal of all existing teachings, which means that includes Muslims, Christians, etc. He also said that this is clearly evident when the tantra makes a classification of the nine vehicles, being the first of them the mundane vehicle, comprising everything that human beings establish as true and therefore believe in; the second vehicle is the Sutra Vehicle Hinayana -not subdivided in two as other classifications do- and the third is the Sutra Mahayana, thus completing the first group of three. The second triad includes the three series of external tantras: Kriya, Ubhaya and Yoga Tantra, and the third group of three includes the inner tantras: Maha Yoga, Anu Yoga and Ati Yoga. This classification is particularly important, as it comes from the oldest of all tantras, the source of all Dzogchen Teachings. 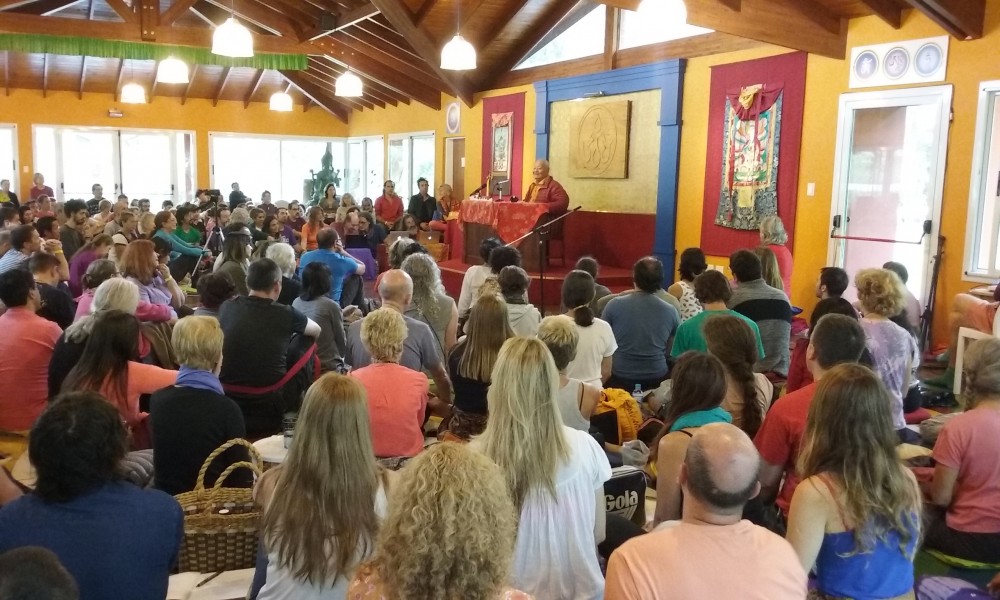 The weather as well, expressed itself with the same liveliness as the words of the Master did, and in that short period of time we lived through all its possible varieties. Cold, heat, serene skies or a torrential rain, all of them were manifesting all the energy put in motion, as it happens every time the Master is at this mountain Gar.

And yet, no matter how the weather presented, at the same time each afternoon, Rinpoche would come to a full Gonpa and the air would fill with melodies. It was the time of Khaita, and for a few hours, only trees were quiet. As the Master explained when speaking about our real condition, in Vajra teachings more important than integrating emptiness is to integrate movement.

Very harmoniously some of us, not so gracefully some others, we all moved at the rhythm of four steps, one at the air, trying to be aware and to enjoy the special atmosphere that we were experiencing inside the Gonpa. The Master kept reminding us that these dances were a Dzogchen practice and after this reminder he immediately would say: “repeat!”

For the second year in a row the retreat was again organized under the principle of generosity thanks to the financial support of some sponsors, and the retreat was free of charge. This way, anyone who wanted was able to receive the teachings without concerns about the money. More than a hundred newcomers made their first contact with the Master, who gave direct introduction during the retreat, according to the first of Garab Dorje´s three statements.

And December 8th arrived, the last day of the Teachings, and Rinpoche´s birthday. As soon as the retreat was over, the party began. Like in other occasions, the Major of Tanti was invited to the celebration, who gave the Master the honorary title of Guest of Honor, by a decree of the City Hall, and a diploma recognizing the Dzogchen Community for its continued support both cultural and touristic to the town of Tanti, in the wake of 25 years of continuous activities. Later on we had artistic shows: keyboards, traverse flute and guitar came from the hands of our musicians, with a repertoire that included the Dzamling Gar song and a melodic interpretation of the 100 syllable mantra, together with a choir of practitioners.

The celebration continued with videos that members of the different Gars and Lings from all over the world sent the Master with loving wishes. Among them a very funny one produced by Norbuling, in the style of the old comedies of mute movies, in which the practitioners from the Ling of Peru set up a birthday party that made everybody laugh! Finally a group of practitioners performed two Tibetan khaita dances, and also a group of children danced for Rinpoche, among the applause and ovation by all. 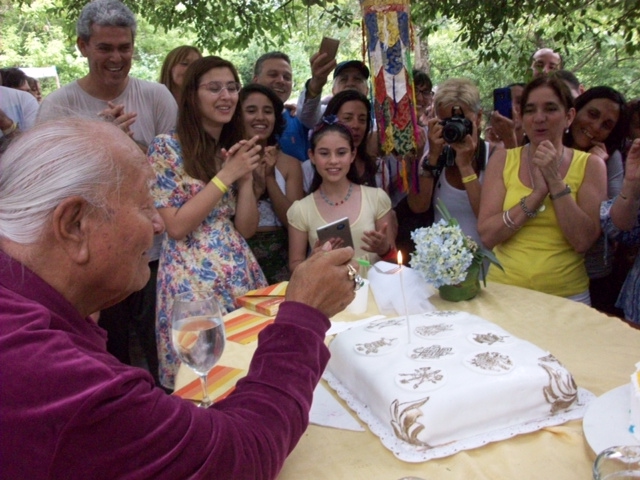 The festivities continued outside the Gonpa, under a sky full of clouds and hot weather. The Master’s table was well protected under a tree and there a birthday cake decorated by hand with the eight auspicious signs in gold, truly wonderful, was offered to him. 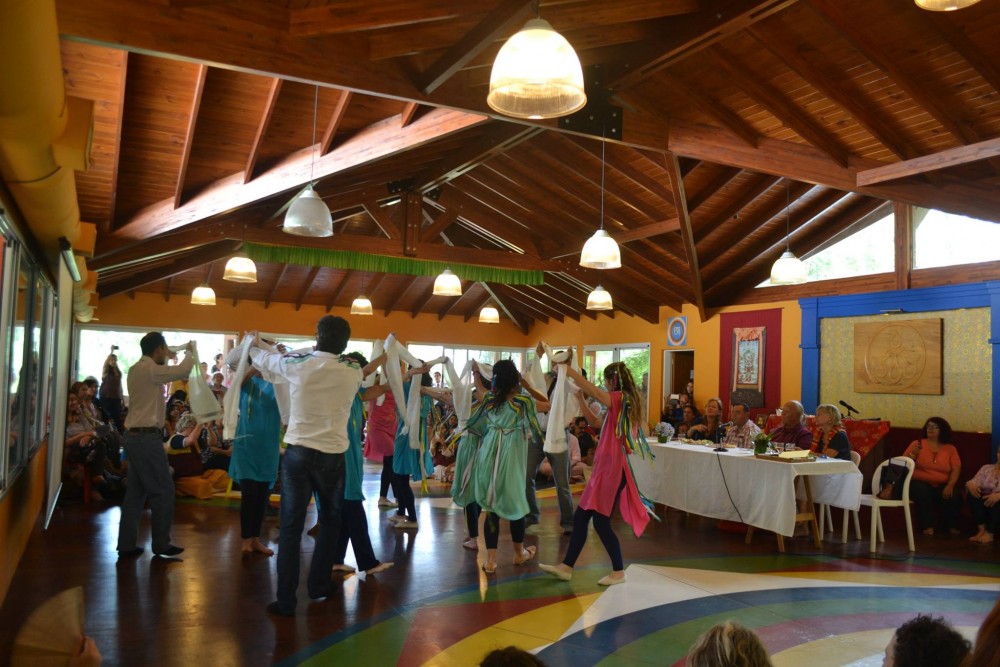 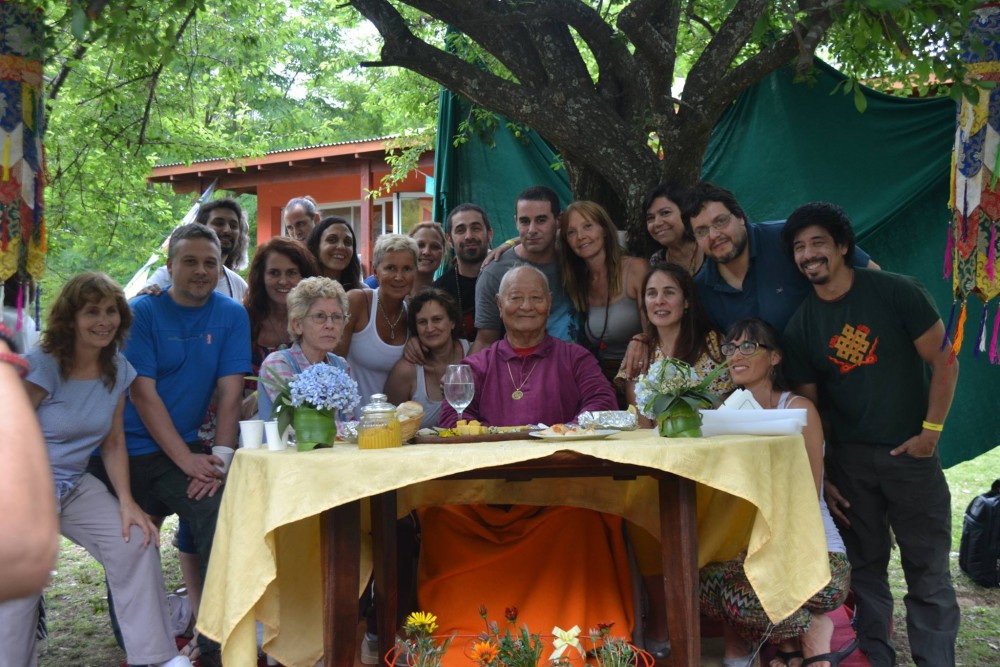 Together with Rinpoche and Rosa

A few days later, before his departure, Rinpoche attended a farewell barbecue with all the people and again we made a toast and celebrated. That was the characteristic of this time with the Master, that of a great celebration , in which we shared the great fortune of being with him again, like a big family , with the same joy of the one who has returned home after a long, long trip.