Merigar West was the venue for a three day meeting, June 5-7, 2018, between the Board of Directors of the newly established International Atiyoga Foundation and the staff of Shang Shung Foundation Italy.

On the first day of the meeting, there was a brief presentation of the Atiyoga Foundation. On 16 February 2018, the first day of the Tibetan Earth Dog Year, Chögyal Namkhai Norbu announced the birth of the Atiyoga Foundation via web cast from Dzamling Gar, the Global Gar, to the whole Dzogchen Community, with the signing of a document called its “birth certificate” by its founders, Chögyal Namkhai Norbu and Rosa Namkhai, Carlos Ramos, and Nancy Simmons. Rinpoche explained that the new foundation (ATIF) would be the “umbrella” of all entities that are part of the Dzogchen Community. 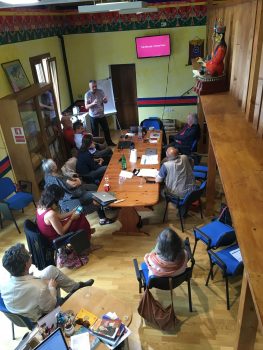 ATIF has five members of the Board of Directors: Marco Baseggio, who is president of the Board and its legal representative, Alex Siedlecki, Director of the Museum of Asian Art and Culture (MACO), Oliver Leick, Director of the Shang Shung Foundation, Pia Bramezza, the Merigar West accountant and Head of the Administration Department, and Ester Escudero, ASIF’s representative in Spain.

The mission of the new foundation is to make available “favorable conditions for bringing out the potentiality of the human being” (Article 5 of the Statute). This will be done in a non-religious way, through the many manifestations of ancient and contemporary art, through knowledge such as scientific, philosophical, psychological, medical, and humanistic research, but also simply communication of knowledge, making use of the tools that are deployed in the different departments and institutes of which it is constituted.

Vision. The Atiyoga Foundation will be a cultural foundation that works not only with cultural traditions – such as the Tibetan one that contains the most ancient knowledge of man – but also with new frontiers of culture and science in the contemporary world, with the intent to build relationships and synergies with institutions such as universities, museums, schools and academies for the creation of courses, workshops and cultural events.

Among its main Objectives the Atiyoga Foundation intends to contribute to preserving and making sustainable the organizations created by Chögyal Namkhai Norbu. This may include the establishment of autonomous organizations (departments) under the umbrella of the Foundation.

The Foundation will also require financial strictness and transparency in all its departments. This will be implemented by management software that will work with the costs center system. Each department will correspond to a cost center.

This management system will include fundraising.

There will be a self-sustaining financial report / initial budget for each department with a related program of activities at the beginning of each fiscal year and a final financial report at the end of the year, with possible adjustments during the year. All documents will be made available to the public.

Departments. All departments will be contained within the legal and management structure of the Atiyoga Foundation. They will be autonomous and responsible for themselves. They will retain their identity and – if deemed appropriate – their own organization.

Shang Shung Foundation currently has its own legal structure. In order to become part of ATIF, SSF must be dissolved and liquidated legally, but this does not mean that it will necessarily have to lose its identity. The other Shang Shung Institutes around the world will retain their identity and structure.

The Museum of Asian Art and Culture (MACO) does not have its own legal structure and is considered an asset of the Merigar Dzogchen Community Cultural Association. MACO will be transferred to the legal structure of ATIF while maintaining its identity and its function.

An ATIF Italy, offspring of the international ATIF, will be created in which the Shang Shung Foundation and MACO will continue their activity autonomously and responsibly.

Yantra Yoga, Khaita Joyful Dances, Vajra Dance and the Visual Arts are currently managed by the SSF for courses outside the Dzogchen Community.
SSF and the instructors involved can create a department / institute for these activities autonomously from the Shang Shung Institute, but always within ATIF.

The School of Tibetan Medicine should be an autonomous department / institute within ATIF and based in Dzamling Gar.

Cultural tourism. In a long-term perspective, the tourist activity managed by Migmar tsering will also be legally integrated into ATIF at the express request of Rosa Namkhai and the Master.

In addition to the Board of Directors of ATIF and Nancy Simmons (as one of the three founder of ATIF), the following people attended the meeting: Tiziana Gottardi (for Merigar), Fabio Risolo (for the IG), and then for the different branches of SSF: Gaetano Ruvolo, Ilaria Faccioli, Fabian Sanders, Kamil Selwa, Margherita Pansa, Mirella D’Angelo, Giorgio Dallorto, Igor Legati, and Migmar Tsering for the International Cultural Ati Yoga Association.