Wisdom Rising – Journey into the Mandala of the Enpowered Feminine 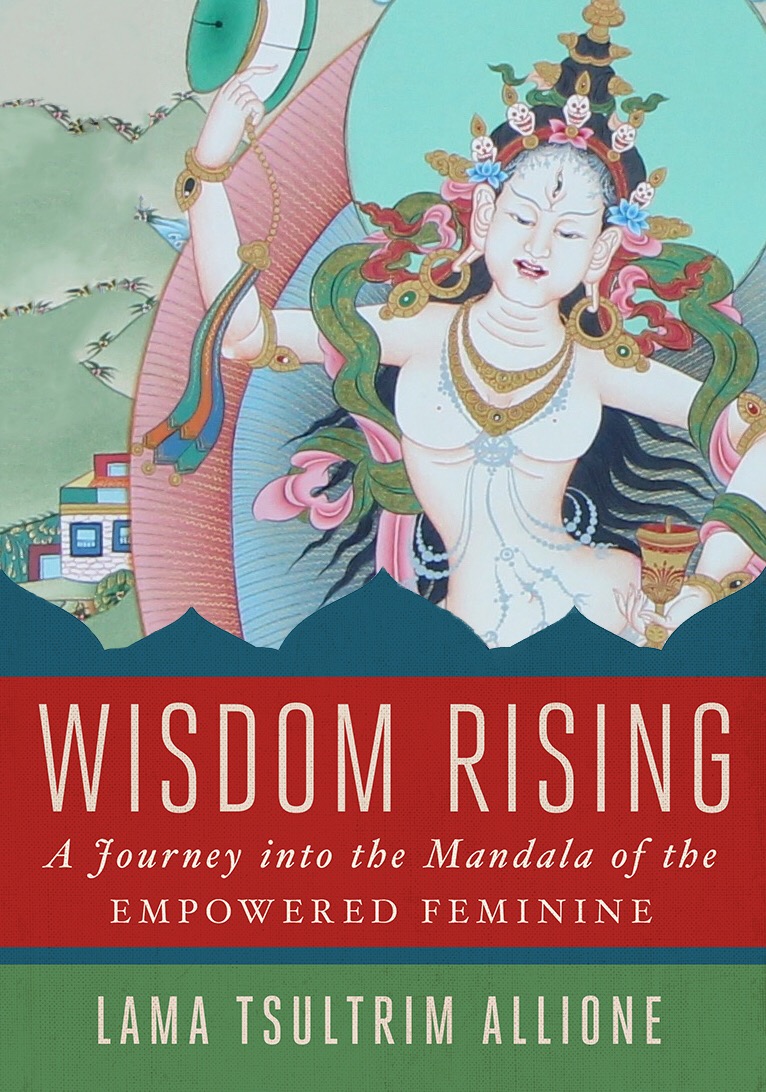 Wisdom Rising – a Journey into the Mandala of the Empowered Feminine by Lama Tsultrim Allione is a multi-layered chronicle of the feminine principle and its importance for both personal and global evolution of the planet at this moment in time. The book illuminates this point of view through emphasizing the role of dakini, an embodiment of the feminine energy of Wisdom drawn from Tibetan Buddhism as a change agent within the mandala of the five buddha/dakini families and their varied encumbered/enlightened energies as the means to enact these changes.

Interwoven into this central theme is the personal story of an American woman who followed her heart towards Asia to meet her destiny some five decades ago. There she received first hand the passing of the baton from one culture into another. We now call her Lama Tsultrim Allione. Tara Mandala Retreat Center, a 700-acre oasis in southern Colorado with a three-story temple ornamented by Tibetan and Bhutanese artists, is a physical blossoming of this journey never before seen in the annals of Buddhism, while Wisdom Rising is the fruit of her own spiritual journey and a continuation of her unique collected works.

In this latest publication, Wisdom Rising follows upon Lama Tsultrim’s ground breaking Women of Wisdom (1985) and bestseller, Feeding your Demons (2008). Here she continues her brilliant commentary on the historical and scholarly aspects of her spiritual roots within Tibetan Buddhism enlivened with her own personal story in conjunction with the emergence of ancillary practices she created to compliment more formal aspects of her training. More importantly in Wisdom Rising, she locates the feminine principle of dakini and mandala as universal themes deeply embedded in the collective psyche of all beings beyond cultural bias, citing numerous scholarly works.

She is particularly adept at expressing traditional and complex aspects of the Tibetan canon in fresh and innovative concepts that portray their meaning with   clarity and practical application. Undoubtedly, this is because she has trained with some of the greatest teachers of our era, as well as among the most innovative, such as the late Chögyam Trungpa Rinpoche (1939-1987) and Chögyal Namkhai Norbu (1939-present), paying homage to both for their deep influence – the former for his genius for introducing the psychological basis of mind training to Westerners and the latter, for his liberating the experience of primordial awareness from the clutches of staid ritual and cultural bias and for his introduction to Machig Labdrön. She is now recognized as an emanation of Machig Labdrön.  As such, Lama Tsultrim Allione widely disseminated Chögyal Namkhai Norbu’s condensed version of Chöd to thousands – an extraordinary compilation of all Chöd lineages from his terma. She also spent decades recovering the main Chöd lineages associated with Machig Labdrön.

When Tibetan masters first came into contact with Westerners naturally the result would eventually be Western teachers, translators, and scholars. This evolution includes the presence for the first time of many female practitioners who are educated and independent. Michaela Hass’s fine book Dakini Power is about many of these female teachers fully established along with the emergence of a whole new generation of academic teachers and practitioners who are transforming how Buddhism is introduced to Western culture.

Wisdom Rising unapologetically suggests the importance of the feminine principle (Wisdom) as manifested through the mandala of the five energy families. Trungpa Rinpoche in his forward to Women of Wisdom over thirty years ago cited that her work was not “mere feminism.” His comment is interesting yet subtle in its denial that such an emphasis would be a “political” diminishment of the Teachings – a topic that sets most religious hierarchy’s teeth on edge including Buddhist. Feminism, as Lama Tsultrim points out is now emerging from the shadows into the forefront of  change as seen by  world-wide expressions and social activism not excluding unmasking patterns of feudal behavior within the patriarchal remnants of Buddhist social structures.

What sets her apart from other teachers is her humble expression of personal journey through loss, grief and struggle as a woman, mother, wife and teacher. Lama Tsultrim’s fierce determination to forge a path through outmoded patriarchal norms has created a fresh and bold revamping of how Vajrayana might be taught successfully in the West for future generations. While some will dislike this orientation, I applaud her staying true to her original vision—that being born in a woman’s body is not an impediment to realization but profoundly suited.

In these Kali Yuga times, the rising of a secular feminist perspective is an important ally to revitalize societies through raising the bar of awareness about sexual harassment, rape, arms possession, income disparity, climate changes and environmental ills detrimental to the global well being of all sentient beings. However, its greatest use is not gender politics but to empower both men and women to discover their potential for wisdom. Social activism need not be adversarial to the origins and transmissions, but becomes a container from which sacred Teachings can flourish.  Lama Tsultrim boldly takes this on.

These are challenging times, and we are met with chaos and change at every turn. To find the powerful dakinis now, and to be able to dive deeply into their Mandela and to hold it as a centering template from which you live, creates a stabilizing and empowering source to draw from in whatever activity you find yourself. The dakini represents the secret mystical quality of absolute insight. She is an ally and a wise companion. And my aspiration iss that by communicating with her and honoring the dakini, we will begin to heal our inner and outer world. My journey to and with the dakini has been going on for half a century and has paralleled the rapid changes on earth, changes that have become more devastating daily. I have become convinced that it is her wisdom that we need now.

Wisdom Rising represents the journey of one person whose  impact may appeal to both beginners and to more seasoned practitioners. Beginners will find the introduction to the Mandala of Five Dakinis as a great healing method. It identifies one‘s neurotic styles in a method that embraces rather than rejects the rich potential of experiencing our lives more holistically by incorporating minute elements, psychological styles in the form of habitual patterns that hinder evolution, and the release of these blocked energies to experience one’s natural wisdom qualities. More advanced practitioners can utilize their training to include the deeper meanings particularly in connecting to the energy work of the subtle body.

Fortunately, Buddhism in all its manifestations has an exceptional plasticity across cultures that draws on a deep well of renewal rather than static entrenched traditions. The creative impulse is closely linked to a non-conceptual base from which gestures, words and any multiplicity of insights arise.

Dakinis are not just pretty girls dancing in the sky with cantaloupe shaped breasts and tumescent bhagas as depicted in countless images, but sometimes appear as old women, scholars, or protectors of the Dzogchen teachings.

The metaphor of nakedness represents unadorned naked mind fully awakened and no longer frozen in concepts or deep attachments, but liberated into the vast space of endless possibility where she dwells. Every moment then is a summons to come join the dance. The feminine principle is beyond all form, the ground of being itself, which is clearly elucidated in the chapter, “One Ground, Two Paths, Two Results.”

Lama Tsultrim Allione’s Wisdom Rising is yet another ground breaking publication filled with resources and guidance for realization.