As Chögyal Namkhai Norbu explained, April 8 was a very auspicious day on the Tibetan calendar – with the not so common particular combination Drubjor, giving attainment of every activity, and also the fortunate combination of earth (element of the day of the week) and water (element of the constellation), bringing growth and prosperity. So Rinpoche said it was a good day, he chose in advance, to give the name Shangpa Master to Lama Denys, in recognition of his being lineage holder of the Shangpa Kagyu lineage, and also recognizing the importance of this lineage, its seat of Karmaling, and its connection with the International Dzogchen Community. 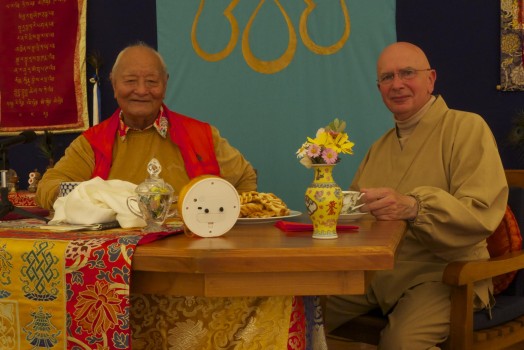 Shangpa Master Denys expressed his pleasure and gratitude, both in words and also with the gift of a large gilded statue of Shakyamuni Buddha, and expressed a wish for the long continuation of the relationship established between the two organizations – in particular he looked forward to receiving more of Rinpoche’s precious Longsal Teachings at Karmaling.

The ceremony continued with the practice of Marme Monlam for cementing the vajra relationship between us all, and of course concluded with sealing the dedication of merits. Chai tea and Kyabse prepared by Rabgyi and many helpers were then enjoyed by all, before joyous participation in khaita dancing!

Julian King-Salter for The Mirror