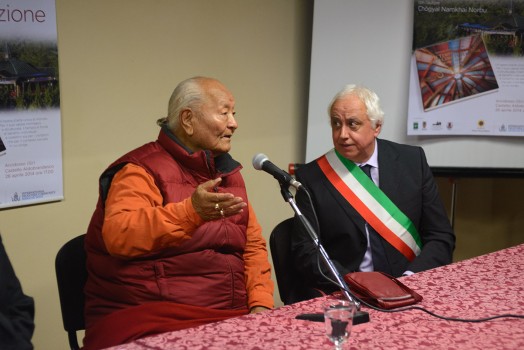 On Saturday April 26, in the late afternoon, in the hall of the medieval Aldobrandescan castle of Arcidosso in the heart of Tuscany, Chögyal Namkhai Norbu presented the book The Temple of the Great Contemplation: The Gönpa of Merigar. This beautifully presented and colour illustrated publication, written by the Master and published by Shang Shung Edizioni in both English and Italian, describes all the symbolic elements of the Merigar West gönpa and sets out the biographies of all the masters portrayed on the eight panels of the building.

The presentation was opened by Fabio Risolo, SMS instructor and head of the secondary school system on Amiata, who introduced Chögyal Namkhai Norbu, the Mayor of Arcidosso, Emilio Landi, and the translator/editors of the book, Fabian Sanders and Iacobella Gaetani, to an audience that included local and provincial dignitaries and members of the Dzogchen Community.

The event had a ‘family’ feel to it since over the years the collaboration between the Dzogchen Community and the local authorities has steadily increased and, as the Mayor said after extending greetings to all present from the local administration, “Your community is our community”. 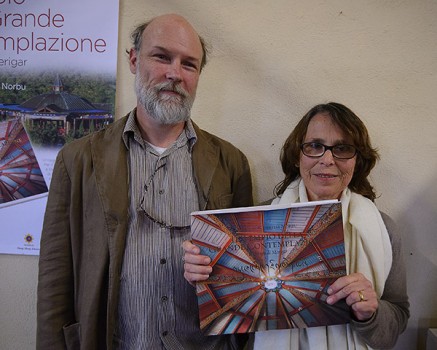 On behalf of the translator/editors, Fabian Sanders explained briefly how the gönpa is an iconographic and architectonic expression of the teaching that Rinpoche is transmitting and that the book is divided into two sections: the first being the translation of Rinpoche’s original manuscript regarding the decorations, sacred images and texts in different styles, while the second part contains the biographies of the masters on the eight panels within the building. The latter, he said, was the most difficult part requiring a lot of research into the sources of the biographies.

Finally Rinpoche took the floor and expressed how happy he was to be in the castle. He spoke about arriving in Italy when he was only 21 years old and recalled how the Dzogchen Community had first started at Merigar. “When we first arrived in the area”, he said, “We were the ‘Tibetans’, even if I was the only Tibetan among us!”

It was, he emphasized, with the collaboration of the local authorities and people that we were able to build the temple for which he really wanted to thank them. He reminded the audience that a very important master, H.H. the Dalai Lama, was invited and came to inaugurate the temple in 1990 and had even visited Arcidosso. In fact the inauguration of the gönpa was celebrated not only by his students at Merigar but by the whole population of Arcidosso.

Rinpoche spoke about the manuscript he had written with details about how the decoration of the temple should be made and the figures of the different lineages that should be depicted on each side of the octagonal building. He thanked the translators for their work and their research into the biographies of the masters portrayed in the temple.

He went on to say that although it had taken many years to complete the book, he was very happy to see the concrete result.

In closing, he commented, “Even though I was born in Tibet, I feel like I belong here”. 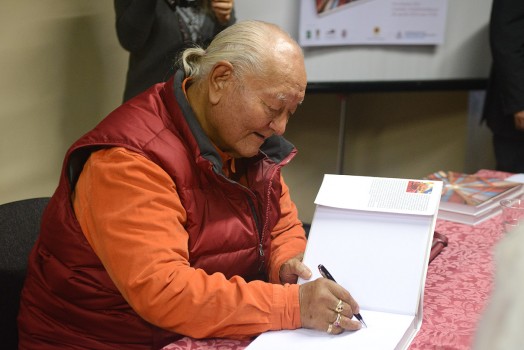 The event, which was in Italian, translated into English and webcast to the Dzogchen Community throughout the world, concluded with the author signing copies of the book for the many people who attended this very special event.