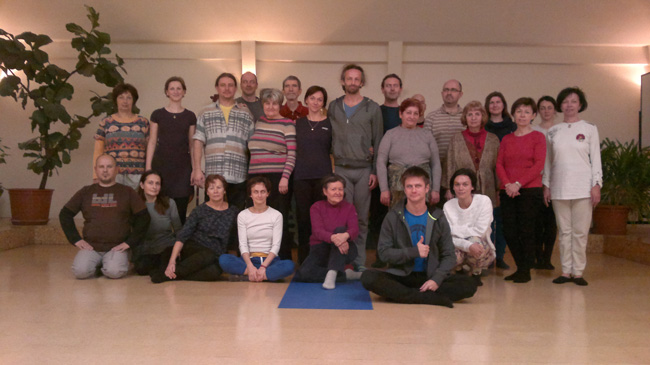 The first Harmonic Breathing course with Zoltán Cser in October, 2014

We held our first Complete Breathing course with Zoltán Cser, Yantra Yoga instructor, at the beginning of Autumn 2014. Many people took part in the course.

Immediately after we thematically practiced the material of the course on ten occasions. There were between 26-34 of us practicing together in the hall of the Tan Kapuja Buddhist College. It was not easy to find enough space for everyone. 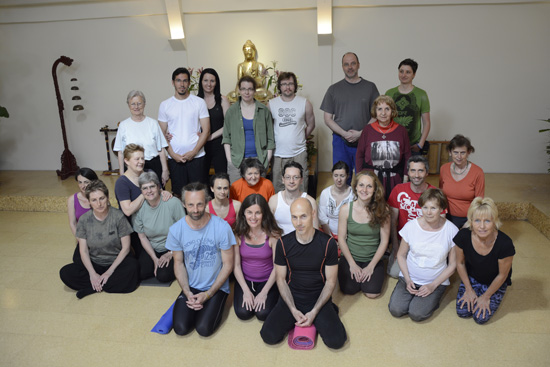 The last day of the first thematic 10-occasion practice in May, 2015. (The lady standing on the left is our interviewee, Zsuzsa Hadnagy, a neurologist)

Because of the successful nature of the course, we organized a second thematic practice series in Spring 2015. There were many participants for this as well. 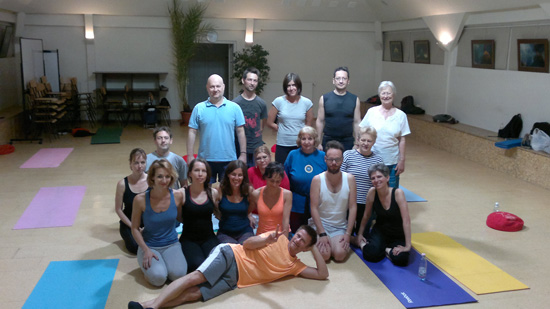 The last day of the second thematic 10-occasion practice in August, 2015.(The four ladies on the left side of the first row: Szandra Sáthy, Edit Kozár, Mónika Lakatos, Annamária Czika)

Meanwhile we cultivated the practices of Complete Breathing on a daily basis (2 sessions a day for 9 days) during our two summer retreats: Secret Rushens and the Seven Semdzin. From Autumn on, Harmonious Breathing became a permanent part of our Saturday practices.

The second Harmonic Breathing course with Zoltán Cser in October, 2015

Many people come to the practices including those for whom Yantra Yoga is more difficult and many other people come who are good at Yantra Yoga. Many young people and some elderly show up, as well as those who find it difficult to move. 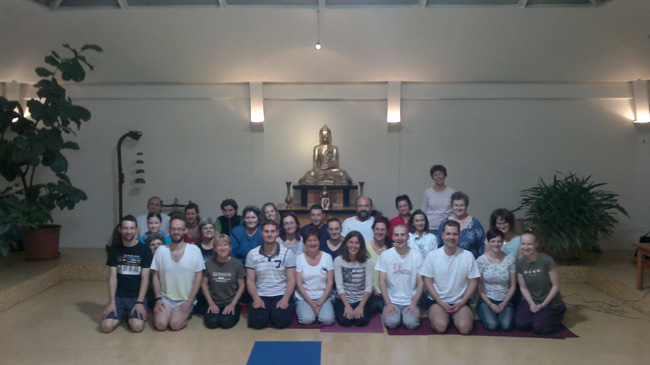 The first day of the third thematic 10-occasion practice in October, 2015

We acknowledge with pleasure that more and more people from other Buddhist communities are taking part in our practices, even from the Buddhist College (TKBF).

To conclude we present a short interview with one of the elderly participants. We conducted a mini-interview before the Harmonious Breathing Course with an inspirational aim. We asked Zsuzsa Hadnagy what she expected and what she “received” from the breathing practice.

Community: What did you expect when you first heard about the breathing practice, and what did you receive? How much did your expectation and the reality differ?

Zsuzsa: When I first heard about the harmonious breathing practices I thought it might be useful to learn to breathe properly. The syllabus of the transmission surprised me and I really liked it. I am glad I was able to discover my hidden reserves, the “forgotten” corners of my lungs, the “sharp” self-concentration. I was happy to fill my lungs with air, my posture and my mood improved.
I received this from the very first practicing together and the quality of this constantly developed with more practice. I did not dare to think that this would be so, but I was driven by my curiosity.

Community: How do you see the relation of other practices and breathing? Were you able to integrate what you acquired at the breathing practices into other forms of practices?

Zsuzsa: I am able to integrate it into other practices of mine since my breathing became fuller. As our trainers said my “breathing pattern” changed. Practicing breathing does not substitute my other practices but makes them more complete.

Community: How many times did you take part in the community’s practices? Did you use the knowledge at home as well? What difference were you able to recognize in yourself?

Zsuzsa: I took part in all the sessions on the first course and half of them on the second one. I do practices every day whenever I feel it necessary. The most important change I realize is that I am more conscious concerning my daytime breathing, I concentrate on it more. If I feel it is “blocked” or becomes too superficial due to some emotions, I can change the bad habit. I can practice for a longer period of time when doing certain housework, or when sitting at the computer.

Community: To whom and why would you advise the breathing practice?

Zsuzsa: I can recommend acquiring harmonious breathing for everyone regardless of age. It changes the quality of our everyday life and makes us face our deficiencies.

(Zsuzsa Hadnagy 77 years old, retired neurologist, was Zoltan Erdélyi’s patient. She heard about the breathing practice from him and became curious what this provides for people. She has been practicing a Sutra path for 16 years and in addition she follows Tai Chi and occasionally Hindu Yoga. Zsuzsa is the lady on the left in the standing line, wearing glasses.)