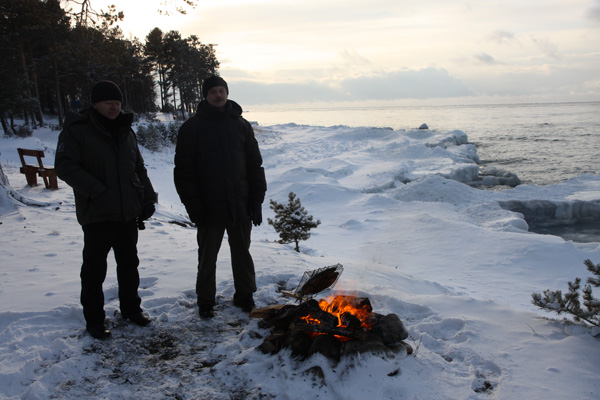 Alexander Gomonov and one of the practitioners, Vitya Gusev

In Ulan Ude, Buryatia, from 15 November to 2 December the local ling, Kundrolling, organized a series of courses and retreats with Alexander Gomonov. First there was a public talk on ‘Indivisibility and harmony of the world and human being within the ancient knowledge of Tibet’ followed by an open meditation course on ‘Recognition of the real state in the practice of Tibetan Guru Yoga in the context of the Sutra teaching’. At the same time the world transmission on the anniversary of Adzom Drugpa took place and fortunate newcomers were able to participate in the following retreat on the Base of Santi Maha Sangha – ‘Basic principle of Ati Yoga. Methods to purify obstacles and karmic vision’. The retreat on contemplation practices of the 1st Level of Santi Maha Sangha concluded this series.

The participants noticed that they deepened their understanding of the teaching, obtained experience of working with manifestations of the three existence and clarified the direction of further practice.

In the end there was a picnic and short (it’s already cold outside) Ganapuja on the shore of Lake Baikal.