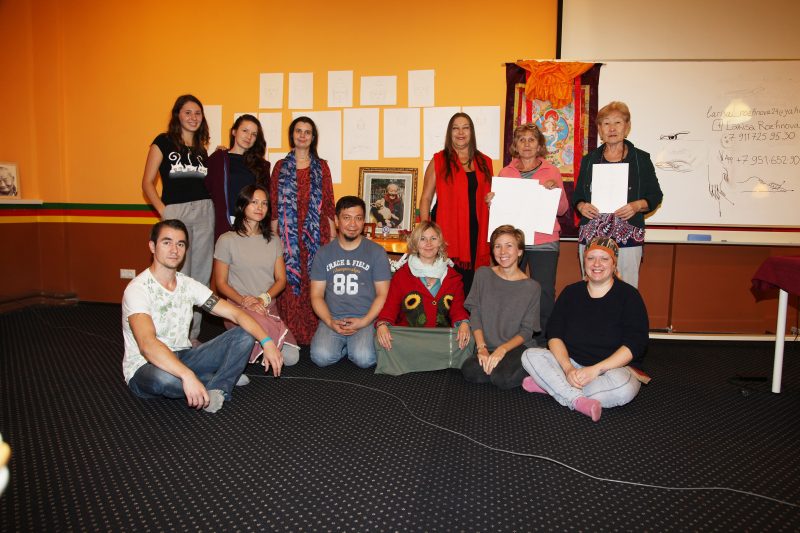 During the last weekend of September 2018, we enjoyed an opportunity to start to learn the Art of Thangka painting.

Clearness of lines, nobility of forms. The Art of Thangka is considered to be incredibly difficult. Larisa Rozhnova helped us to understand that everyone who has persistence and desire can learn it. Intention and diligence are important. Firstly comes Buddha’s head. As well as in the academic drawing when you start drawing the head, you begin with proportions. To paint a thangka, lines are accurately drawn to scale (Tibetan Sor ), and as a result, the grid for drawing the image is in strict proportions.

For the second day, after drawing the head, it is possible to start Buddha’s image. And then to draw Buddha in monks robes, then Tara, for example, and all the other deities. Generally, never-ending joy! Because there are a lot of deities and it is good to know all of them in order to correctly visualise them while doing practice. It isn’t so interesting to learn according to books. Drawing thank is much more interesting and informative.

Similar courses, in collaboration with the Shang Shung Institute of Russia, are planned in the future. The main thing was that there was interest in training. It is wonderful that such courses of thangka painting begin to be conducted on a constant basis and will become a feature of Kunsangar North.

About the teacher of the course: Larisa Rozhnova was born and educated in Leningrad, graduating from Art and Graphic faculty of Pedagogical University in St. Petersburg in 1987. She met Buddhism in 1985 in Ivolginsky Datsan near Ulan-Ude and begun to study Art of Thangka  in Buryatia in 1985,and later  underMarianna Van der Host Lem. From 1996 till 2003 she studied at the School of painting for the nations of the Himalaya region of India – “Painting in the style of the Buddhist Temple” / “Painting in Gompa Style”. The teacher and the permanent head of the School of Painting was Nawang Dorje. Larisa met  Namkai Norbu Rinpoche, her main spiritual Teacher,  in 1992. She has been a member of the Dzogchen Community since 1992. 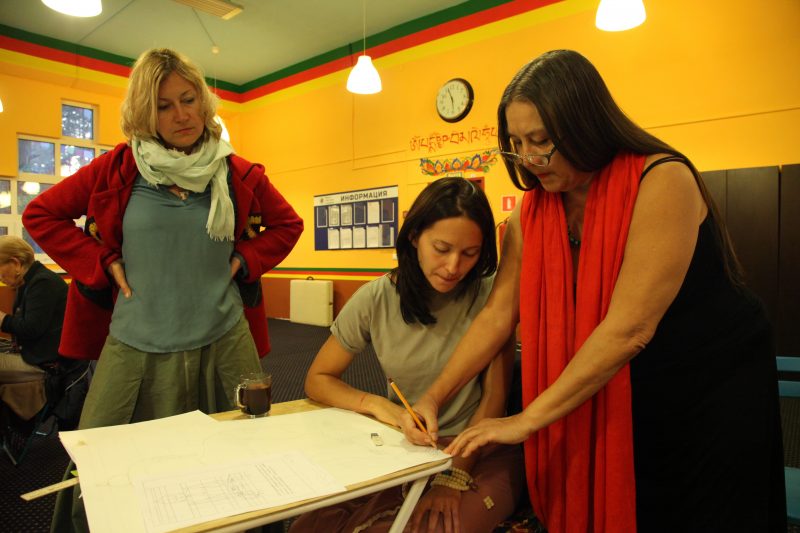 These days were full of practice, impressions, and knowledge. We worked in ecstasy: drew, meditated, studied new techniques and big formats of thangkas … Larisa is able to create an easy and very creative atmosphere of the course. She manages  not only give the maximum information and to share her knowledge, but also to pay attention and give time to everyone, and still, to exude tremendous power and to inhale inspiration and belief in opportunities…
Three days have flown by as one instant and there was no wish to leave… It would be great if such courses of a thangka painting continue on a regular basis and became the good tradition of North Kunsangar.