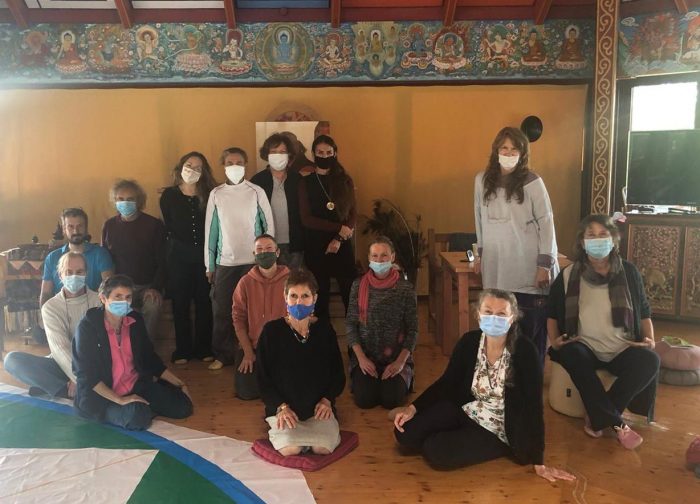 A Deepening Course on the Dance of the Song of the Vajra guided by instructor Adriana Dal Borgo has recently drawn to a close at Merigar West in Tuscany, Italy. The course took place during a very particular time, between the two celebrations of the second anniversary of Rinpoche’s passage to another dimension according to the solar calendar (September 27) and the lunar (the 17thday of the 8thTibetan month, October 3). The five intense days were accompanied by strong manifestations of all the elements, constantly alternating between sun, rain, rainbows, clouds, and wind.

The course was held in the magnificent Gönpa or Meditation Hall at the Gar from September 30 to October 4. Due to the size of the Gönpa there was enough space to lay down and make use of two portable mandalas for the course so that the fourteen people participating in the retreat, a mix of pamo and pawo, could respect the required social distancing with the pamo dancing on one mandala, the pawo on the other.

The course was a joyful and fulfilling experience for all the participants who would like to thank Adriana for her expertise and skill.