Migmar Tsering, Merigar’s resident Tibetan craftsman, talks about making the ornaments in Tibetan style for decorating the Museum of Asian Art and Culture in Arcidosso. 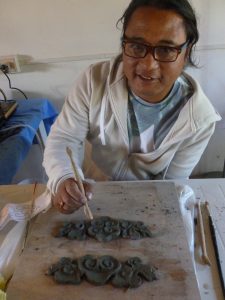 Migmar working on clay to make a mould

We are making these ornaments for the Museum of Asian Art and Culture that will open in mid-December. They will be used on the roof beams and the pillars in the central part of the museum which is being transformed into a representation of the interior of the Jokhang Temple in Lhasa, with traditional Tibetan monastic architecture.

In Tibet these kinds of ornaments are traditionally sculpted in wood, but that takes a lot of time, needs skilled workers, and is very expensive. In India, some Tibetan temples use this type of ornamentation in real plaster, but this is quite delicate. We are making these ornaments using products that when mixed together form a special type of material which is harder than plaster. This is not something that is done in Tibet. We have invented this kind of system and have had to do a lot of experimentation to see if we could get the products to do what we wanted. At the beginning we had quite a few doubts, including whether the colors we are using would adhere to the decorative forms, but after trying out different methods we have found one that works well. 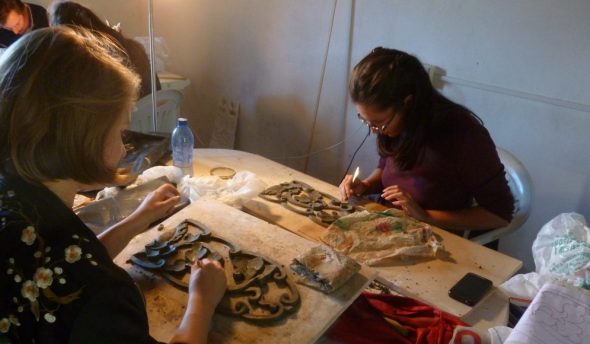 Working on the clay designs

We start by creating different decorative designs in Tibetan style on paper. After this, we create a wooden model with the design and then sculpt the design in clay. This is painstaking work and done very carefully by hand. The clay model is rubbed smooth and then a silicon mould is created from it. We have made quite a few different moulds and with each one we are creating a number of identical decorations.

One of the silicone moulds

When the mould is ready we mix the materials that form this type of plaster and then press it into the mould. Once it has hardened after about half an hour, we remove the form and then clean it either by hand or by machine. Then it is washed and treated, painted in white and then it is ready for coloring. The coloring takes time and is fine work and we have many people helping with this. We are using acrylic colors because the color lasts longer and won’t be affected by water or humidity. 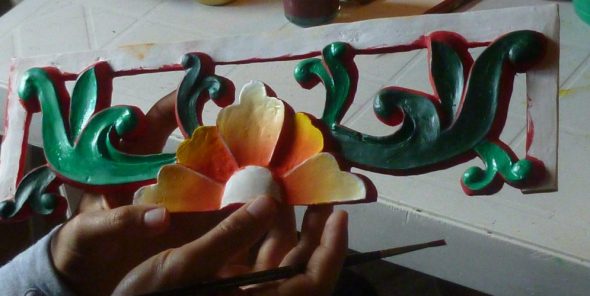 Painting one of the decorations

All the decorative designs are original, some of them are purely decorative with flowers and swirls, others are symbols such as the flaming jewel, a symbol of wealth, the gakyil, the wheel of the dharma, then we are preparing a mould of a Buddha figure.

We haven’t yet calculated how many pieces we are going to need to finish decorating the museum but there will be a great many. Some of the finished pieces have already been mounted at the Museum and they really look as if they have been made in wood. When they are mounted, some of them, such as the pieces on the corners of columns, need to have a little more plaster work so that the join doesn’t show. 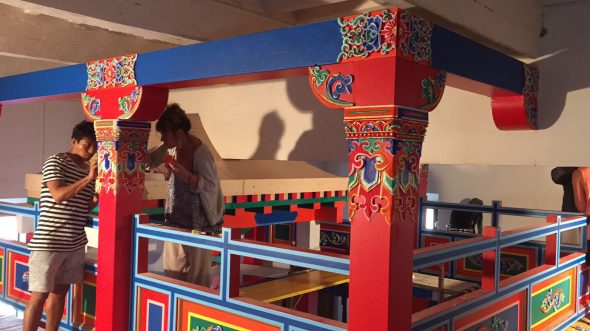 Applying the decorations at the Museum

A lot of people are helping us with this work, both in the workshop here at Merigar Two and at the Museum, although the people are continually changing as people come and go to and from Merigar. On average there are about three people here full time. We hope to be finished in time for the opening of the Museum early in December but the room representing the Temple is very large and it won’t be easy to finish it all in time.

If you are artistic and would like to donate some time to helping with these decorations, contact Migmar for more information: migmar.tsering@yahoo.it or the Merigar office: office@dzogchen.it. 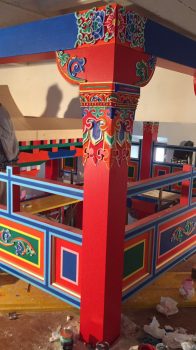 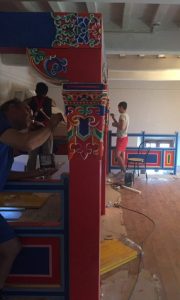