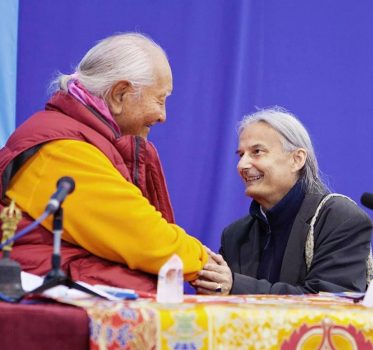 On Friday November 27, 2020, around 2pm Italian time, our dear friend and Vajra brother Elio Guarisco passed away in Como, Italy. He had been in intensive care in hospital for Covid 19.

Elio’s deep background in Buddhist studies started in India in 1974 when he began studying Buddhism with Satya Narayan Goenka, the leading exponent of the meditative Vipassana tradition. Returning from India he deepened his practice with Western teachers and became an authorized Vipassana instructor.

He entered Tharpa Choeling Monastery in Switzerland from 1976 to 1986, and learned the spoken and classical Tibetan language and deepened his knowledge of Buddhist philosophy and meditation by studying with a dozen authoritative Tibetan masters, in particular with Geshe Tamdrin Rabten, philosophical adviser to the Dalai Lama. At that time Elio was one of the co-founders of the Tibetan Buddhist Center Ghepel Ling (which had Geshe Tamdrin Rabten among the founders) and later ‘Terra delle Dakini’ in Milan.

Invited by H.E. Kyabje Kalu Rinpoche, one of the most eminent meditation masters of the Karma Kagyu and Shangpa Kagyu School, and one of the first Tibetan masters to teach in the West, Elio moved to Darjeeling, India where he remained for more than twenty years working on the translation of the great encyclopedia of Indo-Tibetan knowledge, known as Sheja Kunkyab, written by Jamgön Kongtrul Lodrö Thaye. In this project he was the main translator of the following volumes: Myriad Worlds (1995), Buddhist Ethics (1997), Systems of Buddhist Tantra (2005), The Elements of Tantric Practice (2008) published by the American publishing house Snow Lion.

In 1986 Elio joined the Dzogchen Community founded by Chögyal Namkhai Norbu who at the time was professor of Tibetan and Mongolian language and literature at the Oriental University of Naples.

During the twenty years he spent in India, Elio continued to actively collaborate with the International Dzogchen Community and, in particular, with the Shang Shung Institute for the Preservation of Tibetan Culture, founded by Chögyal Namkhai Norbu.

Fluent in colloquial and classical Tibetan, Elio was one of the world’s most important translators of classical Tibetan texts, working on numerous translations from Tibetan for Shang Shung Editions, including many works by Chögyal Namkhai Norbu dealing with traditional Tibetan Medicine and other topics. In addition he wrote an interesting autobiography about his life experiences with Tibetan Masters entitled When the Garuda flew to the West.

For many years Elio also worked as a translator for eminent Tibetan doctors and spiritual masters, including His Holiness the XIV Dalai Lama.

For his work as a translator for many Tibetan masters and organizer of congresses, events, seminars and meditation courses, Elio greatly contributed to the introduction of Buddhism in the West and particularly in Italy.

He was appointed by Chögyal Namkhai Norbu as an advanced meditation instructor and, in this capacity, travelled to various countries around the world teaching and holding courses.

In addition to his vast knowledge of Tibetan culture, Elio was a devout pilgrim who was well acquainted with and had visited and guided others to sacred Buddhist power places in Tibet, Nepal and India throughout his life. The many members of the Dzogchen Community throughout the world and all those who knew him will recall the clarity and detail of his explanations of the Teaching, the great hospitality and generosity that he extended to all people, his indefatigable work ethic and total commitment to the Teaching, as well as his readiness to help others. He will be greatly missed but we will meet again.

The editors of The Mirror
With thanks to Paolo Roberti di Sarsina’s biography of Elio Guarisco.

See Buddhistdoor Global’s interview with Elio on The Art of Translating Dzogchen, 2013