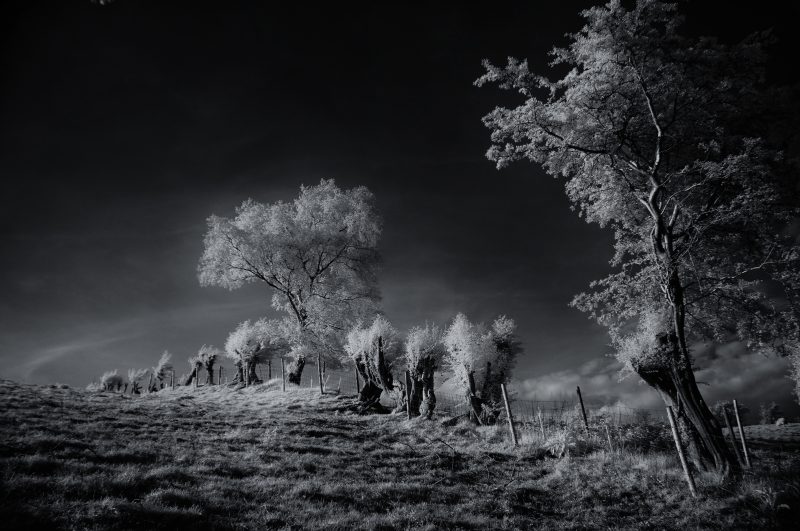 As a child I used to love staring at the mountains surrounding the valley of my home town which at the time was Špindlerův Mlýn in Southern Krkonoše (north of the Czech Republic). I spent my early childhood here until the age of seven. I was brought up by my mother, who gave me lots of freedom and I recall the time living with her in the Czech Republic as my happiest as a child. To follow the Polish education system, my mother asked me to go and live with my grandparents so I started primary school in Poland, not knowing the Polish language at all. Although it was in a different country, Szarocin, the village of my grandparents, was located about 15 miles away as the crow flies from my beloved Špindlerův Mlýn. Just a short distance to the north ridge of the same mountains.

This was a very different and varied life to the one I had led in the Czech Republic. Living there in the village I made my first strong wish to become an artist. I wasn’t interested in any particular genre at the time. People are more likely to forgive artists their unusual behavior without question just because they are artists. I just wanted to be free and not to have to justify my actions. I used to send my mother letters with my drawings enclosed, as she had asked me to. She used to visit me almost every month, many times unannounced. It didn’t matter very much, as I always somehow knew when she was coming. 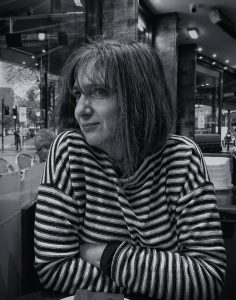 I was busy there with my extended family members, school colleagues, farm animals, dogs and cats. And despite the loneliness I experienced from being away from my mother, I loved the country life and the beauty of the terrain. I had plenty of time to gaze at the hills and appreciate their outstanding beauty and indulge myself in my favorite activity – imagining what might be behind this scenery and beyond. I would also wonder what was behind “the curtain” of the sky and moving clouds that made me dizzy when I stared at them for too long.

Three years after I had moved to Poland, my mother became ill and this changed everything in our lives. We moved together to Karpacz, a lovely tourist resort in the same mountain range. This move challenged my approach to life again but the beauty of the mountains has never changed.

I first became inspired to learn about Buddhism through books while investigating the origins of Kyokushinkai karate that I was training intensively in for a while. I injured my knee very badly during a ‘Kyokushin kumite’ routine and realized that I wouldn’t be able to fulfill my wish of mastering this martial art. Reading books and stories of eccentric Zen masters and how they dealt in cool ways with difficult students, helped me to pull my depressing thoughts away from this adverse situation. I was lucky to have some drawing skills and in my teenage years drawing replaced my passion for karate. But only when I moved away from home to study at the faculty of The Fine Arts at The Teaching College in Wroclaw I did start to lead a more independent life and finally felt in my element.

In 1988, at the Gallery Entropia in Wroclaw, I had the first important exhibition of my drawings curated by Alicja Jotko. My last exhibition was in 1995 in Jelenia Góra and was curated by Maria Schubart. I took inspiration for my drawings mainly from music, poetry (especially by Samuel Becket’s), intellectual provocations and my own experiences. I had my drawings published in the local press, the journal ‘bruLion’ and magazines such as ‘Korek’ and ‘Antena Krzyku’, which were linked with the independent music scene in Poland. In the mid 90’s this led me to graphic design when I was offered a job in the award winning computer games studio, Longsoft Multimedia. 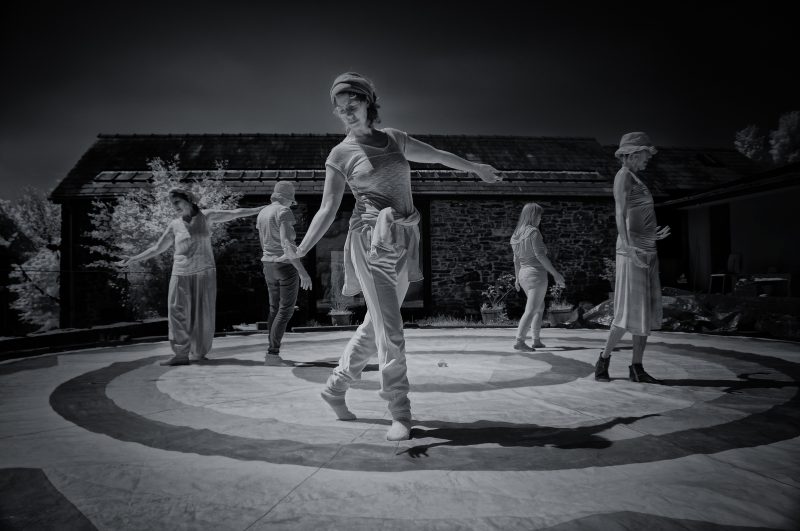 At the beginning of the 90’s, after reading ‘Magic And Mystery In Tibet’ by Alexandra David-Neel and ‘Wonders of the Natural Mind’ by Tenzin Wangyal Rinpoche, I understood that practicing Buddhism could be put into action through different methods, not only by sitting in zazen which I found demotivating. Also in the 90’s I became a Dharma follower in the Kagyu lineage and attended Diamond Way retreats, including initiations from Shamar Rinpoche and the XVII Karmapa, Thaye Dorje.

I remember this as a very proactive and intense time but I inadvertently distanced myself from art. For some bizarre reason I “diagnosed” my passion for art as a disturbing emotion and became confused regarding my need to create. What drove me to Buddhism was the hunger for getting answers. Of course, at first I didn’t get these answers as I probably wasn’t asking the right questions. 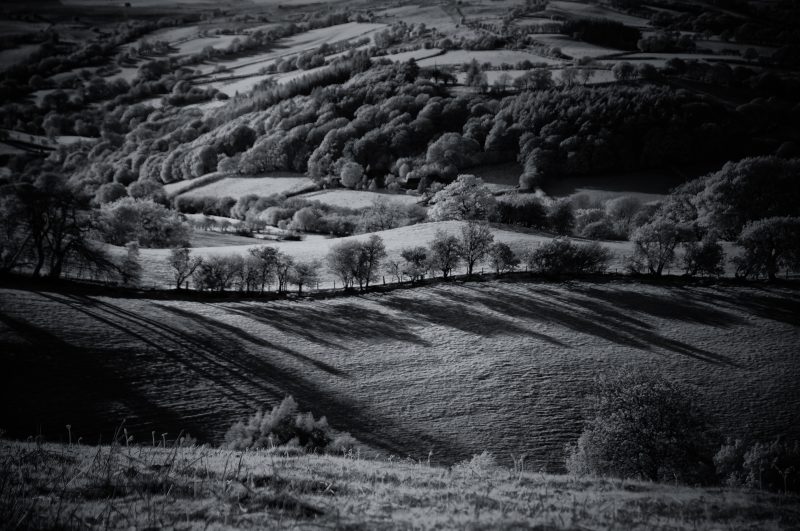 In 2004 I came to the UK for an adventure and met my future husband. I now think of London as my home town. Meanwhile, I bought myself my first digital camera and began taking photos as a pleasant way to kill time, which I also found helped me to relax. My strong need for getting answers came back to me again after my mother’s death. I felt that I needed even more answers.

In 2010 I found out that a famous Dzogchen teacher was coming to London so I decided to give Buddhism and myself one ‘last chance’. I had always wanted to meet this teacher but had been unlucky when living in Poland. I can divide my life before and after I met Namkhai Norbu Rinpoche whom I met for the first time in May 2010 in London. The ‘Three Statements of Garab Dorje’ are the most important teachings I have ever received in my life. I had never before experienced such a stream of energy going through my heart when staring for the first time at the thangka of Garab Dorje and his pointing finger. The Vajra Dance became the most attractive way of meditation for me as well. It felt so natural to become a member of the Dzogchen Community, dancing on the Mandala and singing the Song of the Vajra. There is nothing to gain, there is nothing to surrender. Thanks to Rinpoche’s teachings and his methods, I had finally been given direction on how to get answers myself.

I find the decisive moments in photography to be related to the state of Guru Yoga. This is my private discovery. That moment when everything is united and integrated in oneness and suchness … the moment of awareness. Snap – you take the photo.  It’s a meditation. 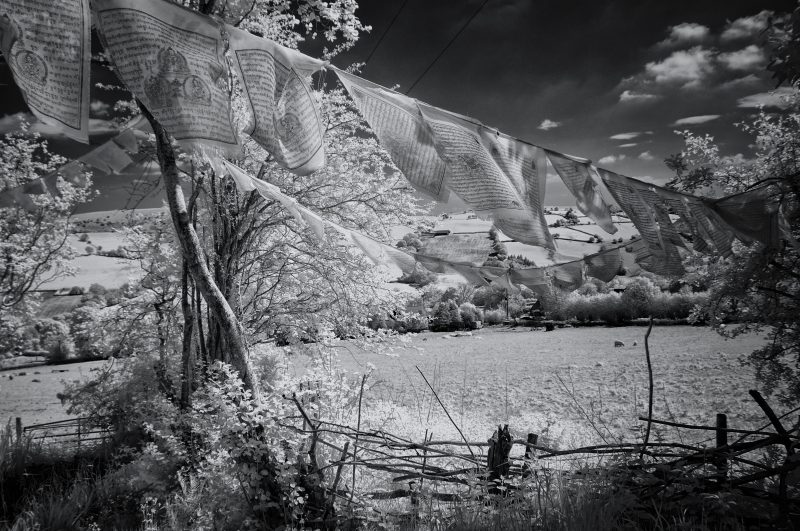 My favourite narrative theme of photography is landscape, which can also be an urban environment. I chose the infrared technique of photography as living organisms (plants, trees) mainly reflect infrared light the best. Therefore a landscape becomes the most photogenic subject, especially when shot in intense bright natural light. The infrared (IR) term relates to the spectrum of light that is not visible to our eyes. This method allows the unseen to be photographed. The pursuit of mystery and how the light emerges from darkness is the favorite subject for my images. I don’t reveal the mystery; I just want to show that the mystery is there!

In May 2018, I took a series of IR photos at Kunselling in Wales during the ‘Mandarava & Vajra Dance’ retreat and later sent them to our dear Rinpoche. I will never know whether Rinpoche ever saw them. In the autumn of that same year I became a Blue Gakyil member of the Dzogchen Community UK. I look after newsletters and social media and am also responsible for designing almost all of the printable items for our Community in the UK.