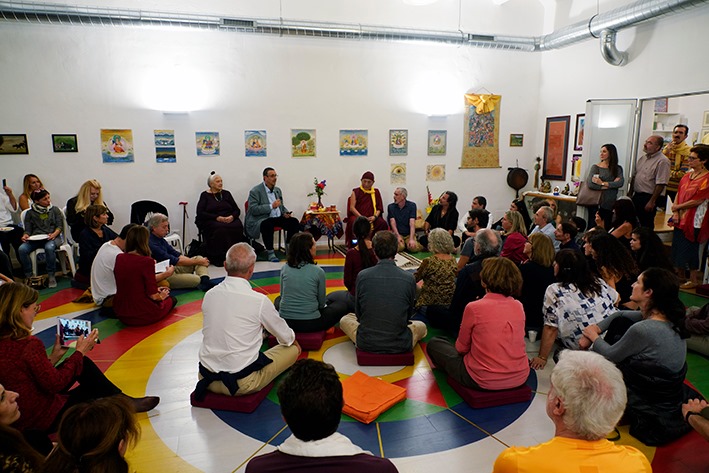 Drugu Choegyal Rinpoche, a well-known artist and Drukpa Kagyu master, is currently the spiritual head of the Dru-gu Community and the Dru-gu Monastic Institute in Tibet. In the Dzogchen Community he is particularly known for his depictions of the Primordial Masters in the Temple of the Great Contemplation at Merigar in Italy and for his close and long standing connection with Chögyal Namkhai Norbu. For part of September and October he was in Rome for the opening of an exhibition of his paintings but also took the opportunity to participate in events at Merigar to honor the passing of Chögyal Namkhai Norbu. Back in Rome, he was a guest at the Open Day at Zhenphenling on Friday, October 4, where he gave this heartfelt message to those present at the Ling.

“As Buddhists we have love and respect for all infinite sentient beings as they have all been our brothers, sisters, mothers, and fathers. Among those, I have a special connection with the Dzogchen Community through Chögyal Namkhai Norbu Rinpoche. Because of this I have been to Italy many times mostly at his kind invitation, so I have many friends here.

I met Chögyal Namkhai Norbu Rinpoche here in Italy with the 8th Dorzong Rinpoche in 1976 when I was following the Eighth Khamtrul Rinpoche, my root Guru. Since then we have had a close connection.

This year, a wonderful and fortunate coincidence happened. For quite a long time Alessandra Bonomo has been arranging an exhibition of my paintings at her gallery in Rome that took place at the same period of time as the first anniversary of Chögyal Namkhai Norbu Rinpoche’s passing. It was an immense blessing for me to be at Merigar at that time (September 27, 2019). 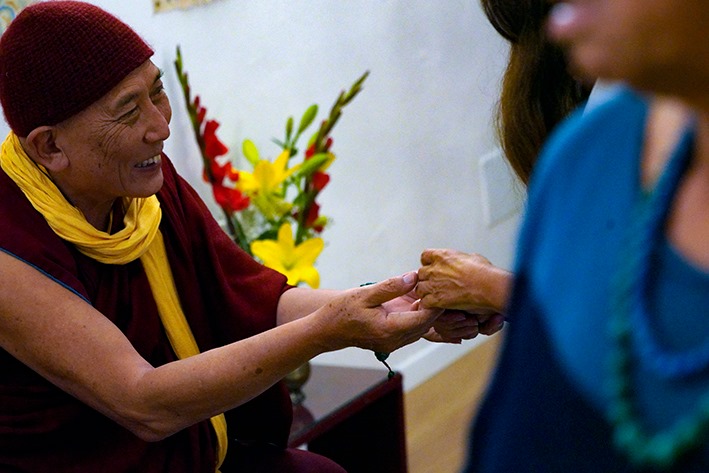 When I attended the Ganapuja at Merigar, I had a deep feeling of the presence of Namkhai Norbu Rinpoche’s wisdom mind even though he has left his body. There was an international Dharma family there, a feeling of being connected, and the effect of his teaching gave a sense of openness to the general energy of everyone present, and his teaching and lineage were alive. 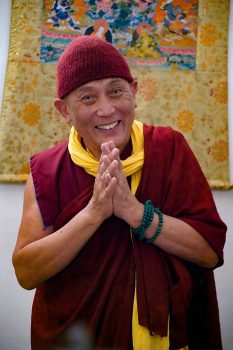 Norbu Rinpoche was a great Teacher who gave so much energy and effort for many years to his numerous activities all over the world without ever stopping. Giving his complete trust to his students, he revealed and transmitted to them the Dzogchen teaching in its most naked and essential form. What he has given you, you have received, and what you have received is enough. Your cup is full, and there is no reason to pour in more because it is already completely filled.

Now is the moment for you to have faith in yourselves and find in your hearts the strength to carry on and to develop and deepen in yourselves the supreme and profound Dzogchen Teaching you have received from your extraordinary Master. Spread this knowledge for the benefit of all sentient beings, especially in your area and your country, in order to diminish the ignorance and pain of the world, the main cause of every trouble, and bring light and positive energy to help all those beings living in darkness. We need to spread this message throughout the world.

I thank Zhenphenling for inviting me. I feel happy to be here and so glad to have met all of you.”