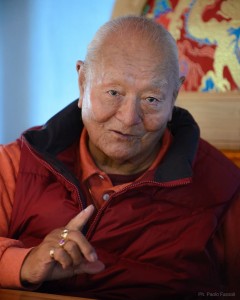 The state of Dzogchen is the non-dual state of khadag and lhundrup, khadag means since the beginning pure and that means how the real condition of emptiness is. But our condition is not only emptiness; emptiness has infinite potentiality. For that reason we say khadag and lhundrup and lhundrup means all self perfected qualifications. How is that condition? When we explain the aspect of everything we can give details and explain many things. But if we want to know we must understand it is non-dual. Khadag and lhundrup are non-dual; this is the real state of the individual. That we can discover only with practice, not in an intellectual way where we are judging and thinking. We can never get in the state in that way.

We have that condition which means since the beginning the totally perfected state. Some people may ask, “If we have this state since the beginning, why are we in samsara? Why do we have all these problems?”  If we are in that state there are no problems. We know in an intellectual way we have the state of Dzogchen but it does not mean real Dzogchen. Then to get in that state we need teaching, teachers, transmission – only knowing the qualifications of the perfected state does not help.

There is a teaching when we are studying Buddhist philosophy, etc., which is the five series of teachings coming from the Buddha Maitreya. When we are learning these teachings there is an explanation giving an example; it is not an explanation of the state of Dzogchen because it is a sutra teaching.

In the sutra teaching, Mahayana, they explain that all sentient beings have Buddha nature. Sometimes they say the seed of Buddha. It means if you are following that teaching you have the possibility to have that realization. For example, in Hinayana, they don’t agree with that. They say sentient beings can never have this possibility. So there are many discussions between Hinayana and Mahayana. Explaining this is a text called gyud lama, where there are many discussions between Hinayana and Mahayana. They give an example that even if we have Buddha nature and Buddha seed, but we do not know it and must apply something, some kind of practice, etc, or we cannot have realization. Only having Buddha nature does not help. Even a sentient being like a small ant has Buddha nature. But they are still farther from the real knowledge and understanding than a human being.

A very simple example: in the countryside there was a poor man and near by there was a cave and a rock and the old man went inside this cave and slept there. In front of that rock there was another mountain. On this mountain there was a practitioner, a practitioner with a highly developed capacity. That practitioner saw that old man came out every morning from the cave and returned in the evening. This went on for some years and then one day the practitioner no longer saw the old man. He wondered what happened and he wanted to know with his clarity. Then he went a little more in the state of contemplation and he had a clarification in his experience of the practice. He knew that the old man died in the cave. The old man was sleeping there every day, he even had no bed. He put his head on a small piece of stone and slept there every night.  With his clarity the practitioner saw that inside the small stone where the old man put his head every night was a very gigantic diamond. That old man had contact with this diamond for all his life. But he was ignorant of that; he did not know there is a diamond.

So that is an example, everybody, we all have the Buddha nature of self-perfected qualifications.  But we do not know how to deal with that and if we are ignorant it has no benefit. This example comes from the teaching of Buddha Maitreya. It is a very simple example but it gives us a more concrete idea. Even if we have that real nature but we do not discover it or have any knowledge of it, there is no benefit. You remember in our real nature state of Dzogchen there is lhundrup; our state of self perfected qualification. That is represented in our normal condition. For example our thoughts, our functions of energy, everything, movements; all movements are associated with the energy level.

For that reason when we are in the original state of the dharmakaya, and there are some secondary causes for manifesting, of course we have infinite potentiality. That potentiality manifests through sound, light and rays, and we can have any kind of manifestation. This is part of our lhundrup; self perfected qualification. There are no limitations of manifestations. But when enlightened beings are manifesting that way, they are not falling into dualism. We cannot say that all sentient beings are just like enlightened beings and are not falling into dualistic vision. In our real nature there is the base, and in Dzogchen the base is called zhi, zhi means base. You remember essence, nature and energy, the three primordial wisdoms; this is our base. Even the real nature, this base, is khadag, emptiness, but then its self-perfected qualification is movement. Movement is called zhi nang; zhi nang means visions of all qualifications. Qualifications and manifestations are movement, not something like dharmakaya.

So if we are not in that knowledge very precisely, and we are thinking, “Oh there is color”, for example. Already we are falling in dualistic vision. This is the reason that even though all sentient beings have their base of the self-perfected state, when there is a manifestation of zhi nang, and we fall into dualistic vision with the consideration of subject and object, this is the root of all problems. For example, when we are in the state of contemplation, different kinds of thoughts can manifest, different kinds of emotions, but if you are falling into dualism, that is samsara. If you are in the state of contemplation, even if there are thoughts and emotions you are not falling into dualism. It is called being in the continuation of the state of contemplation. It is not so easy even if we discover our real nature of the base, but when there are the visions of the base we can easily fall into dualism. You can understand and observe yourself easily.

For example, when we are doing guruyoga, we are relaxing and being in a state of guruyoga. Then after, when we are singing Song of Vajra, we are not doing any visualization. Visualization is in time and space, using mental concepts, so we just integrate with the sound of all the words of the Song of the Vajra. We produce the sounds of the Song of Vajra for example: Ema kiri kiri, one by one, and then integrate and relax in that state. That is how we are doing Ati Guruyoga. Everybody knows that and when we are singing the Song of Vajra, observe yourself a little. How many times are you distracted, you are thinking, you are integrating and after a little while you recognize that you are thinking something else, or you are distracted. This is why we are easily falling into dualistic vision. This is the source of all problems.

So when we fall into dualistic vision, even if our real nature is five wisdoms, for example, the nature of the five elements, the five wisdoms, this is the qualification of the state of lhundrup. But qualifications of the five wisdoms when we are distracted become the five emotions; we are accepting and rejecting and we are distracted with that and producing negative karma. Day after day we are accumulating these kinds of negativities. With this characteristic we have the consequence of the karmic vision. Karmic visions means visions produced from our karma.

Karma means our action. If you don’t use this word in Sanskrit it doesn’t matter, you know the meaning is action. We are not remaining at all without doing anything. It is not necessary we are doing something physically or energetically. Also with mind, we never stop our mind. We are creating and thinking this is good and this is bad, this is ok, this is not ok. So we can understand how we are conditioned by mind. With this we are infinitely producing negative karma.

If we produce negative karma related to our emotions, then you know very well each of these emotions has its characteristic; anger is not attachment, they have a relationship but the way of manifesting is different. Ignorance is not attachment. We are ignorant of our real nature; that is the real meaning of ignorance in the teaching. In general we think that ignorance in our human condition means that someone has no education, not knowing these kinds of things, we say, “Oh that person is ignorant”. In the teaching ignorance is not that. Ignorance means we are ignorant of our real nature. There is no one in our samsaric situation that does not have this ignorance. Some people say, “Oh I am a professor at the university, I know everything. I am very intelligent.” They have this idea but they are ignorant of their real nature. Always ignorance. So this is important to understand; that is what ignorance means.

In the sutra teaching Buddha explained interdependence, the twelve links of interdependent origination, which are the source of all samsara and problems. Which is the number one that is the first origin of all negativities? It is called marigpa, and marigpa means ignorance; we do not know how our real nature is. So in the Dzogchen teaching it is very important to understand that.

In some Dzogchen tantra it says zhi chig lam nyi, zhi chig means the same base for everybody. Why same base? Because even a small animal like the ant has the same perfected state of the nature. There is no difference, from Samantabhadra to a small ant. Whoever has that base, that real nature, is the same. So this is what zhi chig means, there is no difference. Lam nyi means on the path how it manifests concretely becomes two different ways, one is those who are knowing and discovering that, directly or somehow, and then they are liberated from samsara for example, another one is totally ignorant and not knowing at all. This is called rig tang marig, rig means rigpa which means we are being in our real nature in the Dzogchen Teachings. Marigpa means ignorance.

In the Dzogchen Teachings it says dzogpa chenpo sa chigpa, which means unique path in the Dzogchen path, not explaining five paths, ten bhumis, etc., like in the sutra style. Considering these paths and bhumis is always a kind of development stage of progress, relative progress, not definitive. Definitively you need to be in the state of contemplation, either you are being or not being…if you are not being in the state of contemplation you are ignorant and you have no knowledge of the qualification of contemplation. This is a very important point in the teaching.

Transcribed and edited by Naomi Zeitz