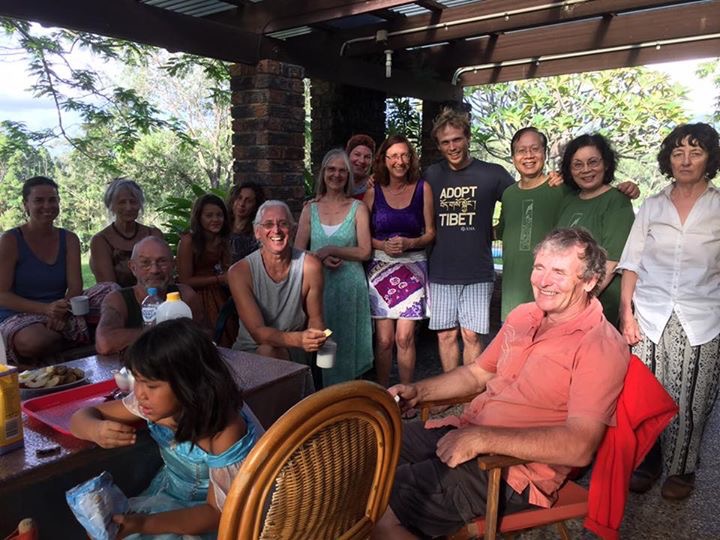 To coincide with the Mandarava Retreat in February at Dzamling Gar and the World Wide Transmission, Arnaud and Nicki Coquillard organized a four day retreat at Namgyalgar on Queensland’s Sunshine Coast. It was an enriching time of learning, practice, dance and karma yoga but also a wonderful, relaxing space to spend time with other practitioners.

Some people were quite new to the Community, so it was a great opportunity to welcome them and get to know them over cups of tea, working in the kitchen, swimming or gardening. Arnaud and Nicki had planned the program well, beginning each morning at 6.30am with Mandarava practice, then explanation sessions, dancing instruction of the Three Vajras and finishing each day with the Mandarava practice webcast at 8pm.

The emphasis was on developing a simple practice, or practices we felt comfortable with and could take home and practice on our own. For this we spent some time going over The Song of the Vajra so that we could remember the melody and the timing correctly. Also, we were instructed in and practiced briefly, two of the rushens, as well as learning sogthig breathing from the Mandarava practice. Our numbers swelled to double for the World Wide Transmission on the Monday and the Ganapuja afterwards. People came from Brisbane, including new people who had tracked us down through the website.

Interspersed through the days, we had instruction from Nicki on the mandala, as well as a long break of three hours at lunch time on the weekend which helped us to relax into our physical bodies as we watched the birds fly about the garden and the wallabies graze in the fields. The weather was gloriously warm with refreshing showers. It was altogether a special time of retreat and learning which brought all of us closer together within our common understanding of Dzogchen.