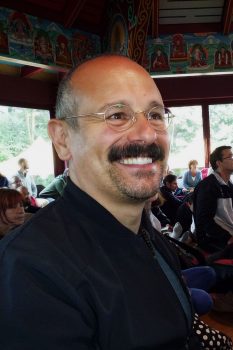 My story is very ordinary. I’d always had this keen but vague interest in Buddhism and the East but it didn’t find many opportunities to materialize. It was the 70s and I was living on the outskirts of Florence, in a family of atheists, materialists and libertarians who would have expected anything of their son short of developing an inclination for mysticism.

The occasional incursions that Buddhist imagery made through chinks in my young mind always left a deep impression. Those unwatchable “Kung Fu” B-movies set in improbable Chinese Buddhist monasteries, the decorations in the local karate gym, documentaries, travel stories, and long-haired hippies in weird clothes just back from journeys to India.

In the chapter on ancient India in my history textbook in the first year of high school, there was an image of a Tibetan yogi from the Dunhuang manuscripts. Bored stiff,  I was flipping through the book during a lecture when I suddenly found it. It took my breath away. I was overcome by a surge of excitement, then relief and then real euphoria. I thought, “But then there are normal people!” Today it makes me laugh a lot but it’s exactly what I said to myself then. Ordinary people.

My years at high school were obviously years of exploration, reading, travel, and attempts at meditation. I soon met Chögyal Namkhai Norbu in books and specialized magazines. His prestige intimidated me a lot and his teaching that was so “secret” but also open and accessible bewildered me.

I devoured “Dream Yoga” which immediately became an object of worship, then other titles and some “cassettes” borrowed from friends of friends. My fear, however, did not diminish. In fact, the closer I got to the Master, the more it increased. I visited other Dharma centers with a cool offhandedness, but the trip to Merigar was always postponed with one excuse or another.

And here we come to the only part of my story that is perhaps a bit original and even funny. My parents had certainly not looked favorably on my “path” and had often asked me worriedly to let go of all those eccentricities and dedicate myself seriously to my studies. In his good-natured ironic but insisting way, my father invited me to “return to reality” and to let go of Buddhism which, like all religions, was nothing but a pile of comforting fantasies for weak intellects.

One day, suddenly, Father invited me to sit next to him with a hint of solemnity.

As if it was the most normal thing in the world he began to tell me with great respect and sincere wonder about a Tibetan Lama who lived in Naples and who had spoken to him that morning at work. The story went on for a while and included some elements that I would call “metaphysical” and that I would have never ever expected to hear from my father. I listened astonished. When the story ended, father nodded and I took my leave perplexed.

Then everything returned as before. The bickering returned to enliven our dinners and Buddhism was again relegated to the idiocies that the immature and idlers mess around with.

After a few months there was another episode: one of my father’s clients, the well-known Orientalist Fosco Maraini, had told him about this Tibetan lama. Father told me about the interview in great detail.

I was more and more disoriented … I tried to convince myself of the need to at least make a visit to Merigar, but my sacred fear of the fire mountain remained unsurpassable. And then it must be said that my father’s incomprehensible intermittent admiration for Rinpoche was truly incomprehensible and perhaps contributed to my disorientation.

We come to the paradox. One evening while we were having dinner at home with a guest, a medical friend, my father called for my attention just when I was already thinking of sneaking out of the house and stirring up some trouble.

Oh no, what does he want now?

“You know he is a disciple of Norbu Rinpoche. He told me that he is a great Tibetan meditation teacher, you really should go and meet him.”

Hang on: this friend of my parents is a Tibetan yoga practitioner, he’s having dinner with us, and my father is in favor of this path? At that point even a stone would have understood that “something” was moving in the air.

Then between embarrassment and enthusiasm I could only manage to say: “But I know him, he teaches Dzogchen, right?” Just to make me sound like a Tibetologist, as if to say, I know all about it.

The guest smiled affectionately, secretly amused by my presumption.

From that day the profusion of coincidences, strange meetings and episodes became increasingly intense. It often happened that friends who had never given a hint of interest in spirituality began to torment me with questions about this “Tibetan Lama”. Someone remained mesmerized by a rib in my library, another by a pendant, someone by a photograph. Even some friends to whom I had only lent a book or a magazine rushed to meet Rinpoche and then become his real students before me. These same friends then also began to encourage me, bombarding me with stories about their experiences with Rinpoche and infecting me more and more.

At the end in 1995, returning from an unfruitful four month period of mystic wandering / bumming around in Nepal, I accepted the fact that the truth is a “serious” thing and that perhaps my period of intellectual romantic fantasies was over: I prepared my backpack and left for my first retreat.

When I had passed the last hill and the valley of Merigar opened before my eyes I could hardly hold back my tears. I met that “smell of Merigar”, that “light of Merigar” that since then have been the cornerstone of my inner life and in some way, intimately, for me are the Maestro.

The first retreats were overwhelmingly intense.

Like all very intellectual people I took long pauses in getting to know the community in order to process my experiences intellectually, to study, to metabolize. I was trying to bring everything back to the tenets of philosophical mysticism in the vain hope of being able to manage on my own, inside my head, this process that is, however, a relationship. A relationship with the Teacher, the teaching and the Community.

For about ten years I have practiced in relative isolation, attending the retreats but without being noticed very much.

In 2008 I received an invitation from a Gelugpa lama, Zopa Rinpoche, to take care of a city center and of the resident lama: Tulku Gyatso. It was lightning in a clear sky because I did not know Zopa Rinpoche nor had I ever practiced the Gelugpa path. I accepted a little reluctantly … but I have to say that thanks to those years of service I finally began to understand the importance of the jewel of the Sangha. Life in the Sangha is an acid bath of the wisdom of the Guru that corrodes all our impurities, all those encrustations that make us inept, unpleasant, presumptuous.

And so thanks to this experience of intense, we could say “forced” community life I have managed to give up the fantasies of the “solitary yogi” and since then I have spent time with the Dzogchen Community with more relaxation and openness.