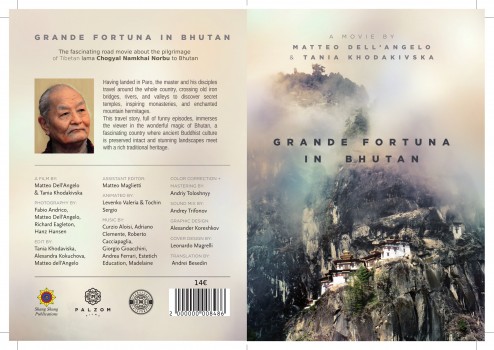 Did you know that Bhutan is the only country in the world where Vajrayana Buddhism is the official religion? Or that one third of its population is under the age of 14? And did you know that in Bhutan national happiness is measured by an index known as Gross National Happiness?

Watching the delightful movie Grande Fortuna in Bhutan, by Matteo dell’Angelo and Tania Khodakivska, we learn these and many more facts, delivered in a brief and concise way, while following the pilgrimage that our Master Chögyal Namkhai Norbu made in Bhutan in 2014. When he was three years old, Chögyal Namkhai Norbu was recognized as the reincarnation of the Shabdrung Ngawang Namgyal (1594-1651), Bhutan’s first Dharmaraja, the unifier of Bhutan as a nation. So this visit takes on a very special significance, for the people of Bhutan as well as for the disciples following our Master through this adventurous journey. Even though, when asked if he is the Darmaraja, Rinpoche answers: “No, I am Namkhai Norbu. That’s more important for me, more concrete.”

The journey unfolds through cities, temples, valleys and sacred places, between mountains more than 5,500 meters high. The overall atmosphere, that the camerawork never fails to capture, is playful and enjoyable, highlighted by good photography and soundtrack. A particularly nice feature are the animations, meant to illustrate curiosities, historical facts or explanations by Chögyal Namkhai Norbu, for example when he explains the significance of meeting three animals, falcon, eagle and wolf, or when he narrates a story told by the Buddha about collaboration.

Throughout the movie, we see breathtaking landscapes and ancient sacred places, but also the omnipresent phallus (symbol of the “divine madman” Drukpa Kunley, master of Mahamudra and famous poet) painted on the walls of houses or made into wood sculptures. It’s almost like being there. We meet archers dressed in traditional attire, shooting arrows with very modern, space-age looking bows. We cross Thimpu, the only capital in the world without traffic lights, then we visit the Place of 108 Stupas, immersed in the mist. Every now and then, the Master personally illustrates some of the sights, such as the iron bridge built by Thangthong Gyalpo, the “Iron chainmaker Mahasiddha”. (By the way, did you know that this bridge was built in the 15th century, but the technology used to make it was discovered only in the 19th century?)

The pilgrimage culminates at the world famous Tiger Nest (Taktsang Palphug Monastery), on a sheer rock cliff, 3048 meters ASL. Besides Padmasambhava, who is said to have flown here on the back of a tigress, the caves on this rock face were occupied at one time or another also by Machik Labdron, Yeshe Tsogyel, Milarepa and other great masters.

A very well done mix between a road movie and a documentary, condensed in only forty minutes which flow so fast that you are left yearning for more, Grande Fortuna in Bhutan is very enjoyable for the general public. Much more so for Dzogchen Community practitioners, who can once more appreciate our Master’s immeasurable kindness.

The film can be purchased from www.palzomfilms.com