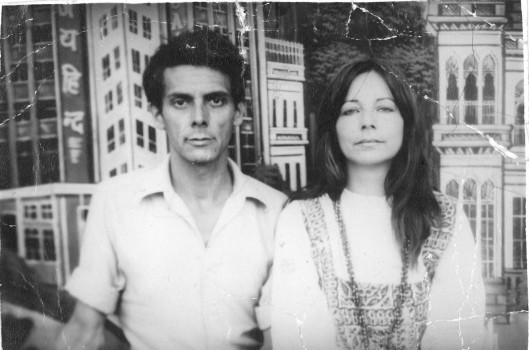 When we left to go to India, in the spring of 1967, my husband, Paolo Brunatto, had decided that he no longer wanted to work for Italian television. We left Italy in this little truck that we had bought together with Mario Maglietti and a group of friends. We weren’t going in search of a spiritual life in India but simply to enjoy ourselves.

At the time we had barely even heard about Tibet and knew absolutely nothing about it. It was an overland trip and I can’t even start to talk about the different places that we passed through because it really became an odyssey – we were nine people in the truck so you can imagine the type of things that went on. We finally arrived in Kabul in Afghanistan where we stopped for around 15 days and at this point the situation we had been living exploded so we ended up leaving the truck in Kabul and Paolo and I set off hitch-hiking to finish our trip to India. We passed through India and got to Raxaul on the border with Nepal and by this time, we had practically nothing with us. Paolo had his movie camera and some film and from time to time sold one of his lenses so we could continue our trip. I had sold some of my clothes because at that time western clothes were very sought after in the East. At this crossing we managed to find a ride with a truck carrying rocks. We arrived there at the crossing in the evening and had to spend the night sleeping in the back of the truck on the stones so that we could leave early in the morning. We only had about 20 dollars with us and the money was in my purse.  I slept with it under my head but in the morning when we woke up, it was gone! The truck driver wanted us to pay for travelling in the truck but we didn’t have anything more to give him and they tried to throw us off the truck. Anyway somehow we managed to go ahead with our trip and finally arrived in Kathmandu where we stayed for three or four months.

While we were there Paolo shot a documentary entitled, ‘Vieni, Dolce Morte’, the story of the underground which became quite famous. The name came from one of Bach’s sonatas but it could be misunderstood because in the documentary you see these young people injecting drugs, but the idea was more that it was a kind of rebirth. Then we set off traveling again and left Kathmandu to come back to Italy hitch-hiking.  I say hitch-hiking because an American friend actually paid our air fare back to Italy. While we were in Nepal we had met quite a few Tibetans that we really liked and before we left the East we had gone to MacLeod Ganj in India where we met H.H. the Dalai Lama who was present at a public event there. When we spoke to his secretary we asked him if there were any Tibetans in Italy. The secretary went to ask His Holiness and came back and told us that there were two lamas living in Rome: Gheshe Jampel Senge and Namkhai Norbu. But His Holiness suggested that we got in touch with Namkhai Norbu. So when we got back to Rome in 1968 we got in touch with Rinpoche. We were staying with friends in house in Pzza. de Spagna in Rome and we invited him to come and have tea with us. He arrived – he seemed like a teenager in his jeans and tennis shoes – and he stayed a couple of hours. I don’t remember everything he talked about but he did speak about an ancient Tibetan tradition. In this period he was living in Tivoli and wasn’t married. Then he left. Then we were not in touch with him for two or three years. In 1973, since Mario Maglietti was still in India and continually wrote to us to come, finally we decided to go back. This time we went to Tashi Jong to see Mario and he introduced us to Khamtrul Rinpoche. I was very struck with this master when I met him and I was very amazed when I received teaching from him.

Then we left for Manali where we stayed in a sort of shepherd’s hut. At the time we had no idea of receiving any type of teaching but an Argentinian friend of ours, Gerardo, was living in Apho Rinpoche’s monastery outside Manali quite close to where we were staying. Gerardo invited us to come and meet this master and so we went, more curious than anything else. He spoke to us – I don’t remember very well – but we told him that we were not interested in receiving teaching. We went back to our hut and continued living like that. One day I was washing up in a little stream close to our hut and I thought to myself that perhaps I would like to meet this master again. I went to Paolo to tell him and in fact he suggested going to Apho Rinpoche even before I mentioned it. So we returned to Apho Rinpoche and started to receive our first teachings on the nöndro while Gerardo translated. And so our spiritual path started in this way in this place.

We stayed there in Manali for some time and then when we had no more money we came back to Italy. We wanted to return there because we hadn’t finished receiving teaching but when we got back to Italy we heard that Apho Rinpoche had died. We were only halfway through this nöndro teaching, we had a ‘pecha,’ and then it came to mind that Namkhai Norbu Rinpoche was there in Italy. We had met him as a student as ISMEO where he worked –-  we didn’t think that he was a master, but we thought that he might translate the pecha of the teaching and so we went to Pozzuoli to meet him once again where he was living with his wife, Rosa, at the time. When we arrived, with his great kindness and compassion, he received us, gave us lunch and we spent the entire day with him. He told us about his life in India when he had had to leave Tibet and then he told us that the 16th Karmapa had sent him a letter asking him to go back and take vows as a monk. He told us that he had replied and sent an invitation to his wedding with Rosa. This was our second meeting with Rinpoche. While we were there he translated the pecha for us and we decided to go to Formentera in Spain to start our nöndro. Rinpoche didn’t say anything, he didn’t give us any advice, he just said, Yes, go there. So we left for Formentera in Spain and started our nöndro. 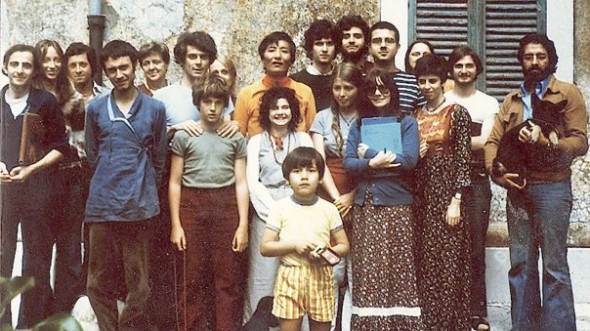 Some of the participants in the Subiaco retreat

When we came back to Italy we met Laura Albini, I don’t remember who connected us with her. This was 1974. The Karmapa had asked Laura to open a Buddhist centre in Rome but instead of opening the centre – she had already met Norbu Rinpoche – she said that she would rent a villa and that we could do a retreat with this master. At the time Rinpoche hadn’t manifested as a master but was more like a spiritual friend to us and we were all interested in the teaching. Laura rented a villa in a place called Subiaco. We were ten or so people – Enrico and Andrea Dell’Angelo, of course there was Costantino Albini, Donatella Rossi, Nancy, Barry and Maria Simmons etc., not a lot of people. The Subiaco retreat was in 1976 and was the first official retreat with Rinpoche.

We spent about three months there with Rinpoche, without interruptions. People came and went – they had to work – and at the busiest moment we were probably around 20 people. Rinpoche would talk and teach all day, from the morning up to midnight or one in the morning. At the time we didn’t always realize that what he was saying was teaching. There in Subiaco Rinpoche also started to teach Yantra Yoga. After the retreat we rented a house with some friends in Montalcino, in Tuscany, and we invited Rinpoche. He arrived one morning very early while we were still sleeping – we used to leave the door open. He came with Rosa and Yeshi and spent some time with us. Later on together with Mario and Anne-Marie we rented another house in Veletri where Rinpoche came and stayed for quite a long time and taught us Yantra Yoga. And from this point on, we were always here and there, renting places such as halls and museums where we could receive teachings until we started to look for our own place. We would go here and there looking with Rinpoche in Umbria and Tuscany until finally we found Merigar. This is my story.