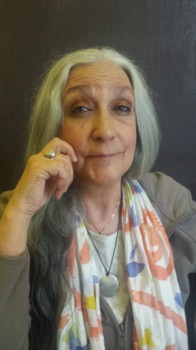 I lived for over six years in Vicolo del Cinque in Trastevere, in Rome. I’d returned a few months earlier from my first trip to India and Nepal and also from my first Tibetan Buddhist retreat at Eupilio, on Lake Como, where the two great Gelugpa masters, Lama Yeshe and his young pupil Lama Zopa Rinpoche had transmitted the first Buddhist teaching in Italy. My Buddhist friend, Paul Brunatto, had told me about the retreat. I’d shown him the little golden Buddha that I’d found on the ground in Piazza Santa Maria in Trastevere a few days after my return to Rome from the East. It was August 1975.

Every morning I would leave home early to go to Piazza Santa Maria for my ritual cappuccino and croissant at the Galeassi cafe. But one day I didn’t. That morning, after coming out of the door at No. 22 Vicolo del Cinque, something “compelled” me to turn right, in the direction of Piazza Sant’Egidio. Later on I realized why. I was about to meet, for the first time in my life, the person who would become, many years later, my precious Dzogchen master.

Outside the front door, I turned right, and after a few meters, I saw coming towards me a young man who I immediately recognized as being very special. He seemed impressive to me and filled with a great dignity. He was wearing a checkered mountain shirt, particularly familiar to me because in Aquila, my city of birth on my mother’s side, I often used to see my uncles wearing that type of shirt when they went trekking at Gran Sasso! Since I’d recently met some Tibetans I immediately thought: “This man is either Tibetan or American Indian”. The ”mystery man” passed me on the left, without giving a glance in my direction. He’d already seen me from afar. However that was one of the few occasions in my life, when I turned around to look at a person. It ‘s not easy to explain what effect that brief moment had on me. What is certain is that it was a moment of pure presence for me: I can still recall the intensity of it!

A few days after my random meeting with the “mystery” man in Vicolo del Cinque, Eva Krampen, who lived with Enrico dell’Angelo in via Santa Dorotea, not far from my house, invited me to their house for the first time since I had met them. Today it is almost four decades since that distant autumn in ’75, but I seem to remember a fireplace in their living room, and on the mantelpiece was a photo of the ”mystery man” I’d met a few days earlier outside my house. I asked Eva who he was and she told me that he was Enrico’s professor of Tibetan language and literature at the Oriental University of Naples! The mystery was revealed!

For the first time in my life I saw a ‘melong’ placed in front of the photo and asked Eva what is was, thinking that it definitely looked a bit magical. ”It’s a melong” she replied simply, nothing more, and I didn’t insist also because she seemed not to want to say more. Many years later I discovered what that wonderful object represented. At that time the master (Prof. Namkhai) hadn’t started to give Dzogchen teachings yet.

A few months after my visit to her home, Eva invited me to go with their group to Naples where “Norbu” (as they called him) was inaugurating the new centre for Yantra Yoga (another mystery to me). Of course I happily accepted the invitation. We found ourselves all together on the train to Naples where we went immediately to the University where Prof. Namkhai was giving a lecture to his students. After the lesson we went, all together, to the presentation and opening of the new place for Yantra Yoga as well as an introduction to Yantra Yoga by the master. Finally we went to a pizzeria and I had the opportunity to meet many of his students including the very young Adriano Clemente and a young medical student, Gino Vitiello, who kindly invited me sleep at his house.

In Rome I was busy preparing my qualifying thesis for teaching art and art history. I had chosen a personal topic – research on Hindu and Buddhist tantric art – a difficult task! At that time, there were no texts in Italian about it in Italy, and I had to patiently translate both the texts I found, one in English, the other in French, not without difficulty. However I passed with full marks. The commission appeared to be very interested in a subject that nobody knew anything about.

At the same time that I was preparing for the exam, I followed a course at IsMEO in Tibetan language taught by Geshe Jampel Senghe, a Gelugpa Lama who, shortly before leaving his body, had founded the Institute Samantabhadra in Rome in 1980, while I was in India. I learned that Geshe Jampel Senghe and Namkhai Norbu had arrived in Rome together in the early 60s on the invitation of the famous Tibetologist Giuseppe Tucci. I also learned that before ”Geshela”, Professor Namkhai had been the teacher of Tibetan at the IsMEO. 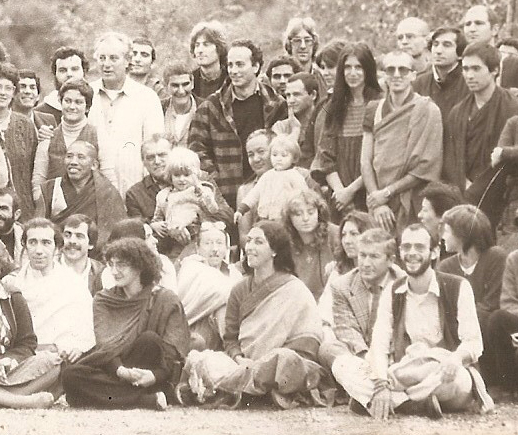 In 1977 the Lama Tsong Khapa Institute was founded in Pomaia by the two masters Lama Yeshe and Lama Zopa Rinpoche from whom I had received the first Buddhist teaching of my life in Eupilio. I consider myself one of the pioneers of this venture because I was there from the beginning of the long renovation project of the magnificent building donated by the Corona family from Milan. It was then that I first met Carol Chaney (then wife of Massimo Corona) who I was to meet later at Merigar. Although I’d already met Prof. Namkhai Norbu, I hadn’t heard anyone talking about Dzogchen even though Eva had given me a pamphlet on the Sardinia retreat, which I read with interest.

In April 1980 the Institute Lama Zong Khapa organized a pilgrimage to India and Nepal that I was very pleased to participate in together with Cristiano Zeppegno who was to become the father of my son Roman. At the end of a very intense month of pilgrimage Cristiano and I decided to sell our return tickets to Italy in order to stay another month in India. We actually stayed for two consecutive years and visited all the states – from Ladakh to Rajasthan and then down to the Tamil and Kerala. We also visited Sri Lanka for a month. 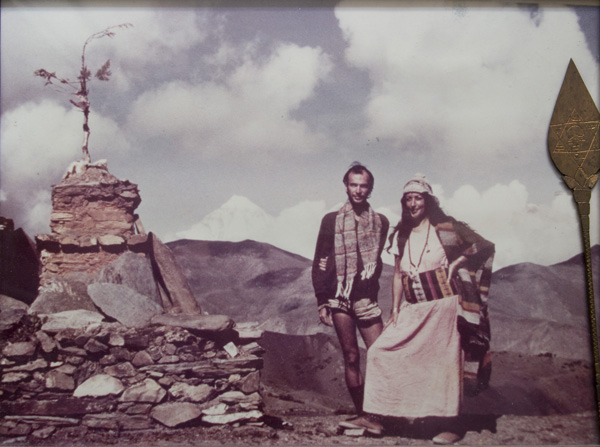 Paola and Cristiano at Muktinath, on the border of Mustang, in the Himalayas, 1981 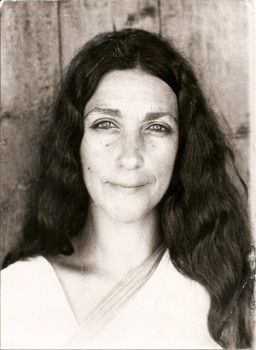 Paola Speranza in Pokhara, Nepal in 1981

In Ladakh it was 1980 and we had arrived in time for the Padmasambhava festival (which is held every 12 years) and enormous thangka of Guru Rinpoche was exhibited at Hemis. An indescribable emotion! During the first month of travel with the group from Pomaia we had the extraordinary opportunity to visit HH the Dalai Lama at his residence in Dharamsala, as well as HH Sakya Trinzin who gave an initiation of Vajrayogini. We were also able to travel from Lukla via Namche Bazar to Lama Zopa Rinpoche’s monastery at Laudo, at over 4200 meters above sea level.

In the winter of 1982, coming back from our stay in India, Cristiano and I discovered that master Namkhai Norbu and his students had bought a big piece of land in Tuscany, on the slopes of Monte Amiata, at the foot of Mount Labro – I’d already heard of the mystical Arcidossan, David Lazzaretti. From Rome, Cristiano and I set off for Merigar (as the place had been called), the center of the fire mountain because the area had volcanic origins. We had been pilgrims in India for about two years so we were not surprised by the precarious situation we found there – we were actually continuing our pilgrimage in the spiritual Indo-Tibetan world. The moment we reached Merigar the first time, the teacher was not present, however, I met some people I had known in Naples six years earlier and I saw again, after several years, Laura Evangelisti who had been my guest in Trastevere in ’76.

HH the Dalai Lama and Chö̈gyal Namkhai Norbu in 1991 in Arcidosso on the occasion of the inauguration of the Merigar Gonpa. Photo Gianni Biaggi

Circumstances didn’t take me back to Merigar until the spring of 1991 when I had the opportunity to come back from Pomaia in the wake of HH Dalai Lama, who had been invited by Prof. Namkhai Norbu to inaugurate the magnificent octagonal Gonpa that had just been built. I remember the words of the Dalai Lama who arrived at Merigar where hundreds of five-colored prayer flags were fluttering: “Like Tibet” he said! Everything was truly wonderful. On that occasion I saw Namkhai Norbu in his elegant western style suit. His Holiness gave a teaching relating to Dzogchen and so I learned that the Dalai Lama was a Dzogchen practitioner. The Dalai Lama introduced me to this precious teaching.

So I decided that I would come back at Merigar to follow the Dzogchen transmission from the person who was considered to be one of the greatest living masters of this ancient tradition, by the man I had ‘accidentally’ met in Rome in Trastevere many years ago outside my house. I went back to Merigar for the master’s retreats in ’92, ’93 and in ’94 when I decided to undertake the study of Santi Maha Sangha, and especially when, following the ill health of the teacher, I decided to move to Arcidosso with my son Roman, then twelve years old, to be present at Merigar and the Dzogchen Community. It was a difficult choice, maybe a little reckless, and created many difficulties both for me and to my son. However, the opportunity that I was offered to collaborate in the Dzogchen Community was very valuable for me. Among other things, I was able to participate in painting the Gonpa, work on the door and windows of the Stupa at Merigar and also experiment with gold gilding for the niche of the Buddha at the Stupa, all of which I consider to be among the most extraordinary and wonderful experiences of my quite adventurous life on this planet.

From the bottom of my heart I thank my precious Master Chögyal Namkhai Norbu, all my other precious masters and Vajra brothers and sisters.