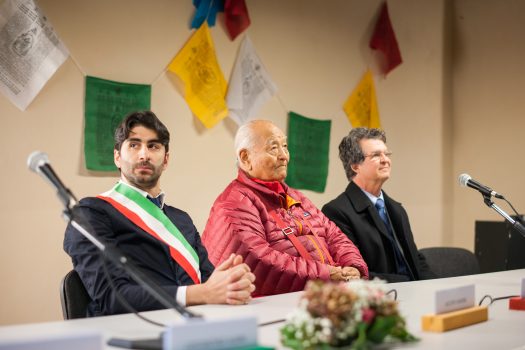 The official inauguration of the Museum of Asian Art and Culture (MACO) began in the Conference Room of the Arcidosso Castle on the morning of December 10, 2016 in the presence of Prof. Namkhai Norbu, the Mayor of Arcidosso, moderators Costantino Albini and Jamyang Oliphant of Rossie, and the Director of the museum, Alex Siedlecki. Many guests attended the event including political figures such as the Mayors of Adeje (the Municipality in Tenerife where Dzamling Gar is situated) and Tanti (Tashigar South, Argentina) and representatives of international universities and research centers, as well as representatives from the Merigar Dzogchen Community Cultural Association and Dzogchen Centers around the world.

The inauguration at the Castle

The Mayor of Arcidosso, Jacopo Marini, welcomed those present and warmly thanked Prof. Namkhai Norbu for having chosen Arcidosso as the base for one of the main centers of the Dzogchen Community and for everything he has done for the Amiata area. The Mayor spoke about this historic meeting between Eastern and Western cultures, namely a Museum of Asian Culture hosted in a medieval Italian building, and went on to say how the two Communities are building bridges while others are erecting walls.

Prof. Namkhai gave thanks to the Municipality of Arcidosso and the other Municipalities of the Amiata area for their ongoing collaboration that had enabled them to arrive at this historic moment. He also expressed his joy and thanks to the many people who had travelled from different parts of the world to be present at the event. 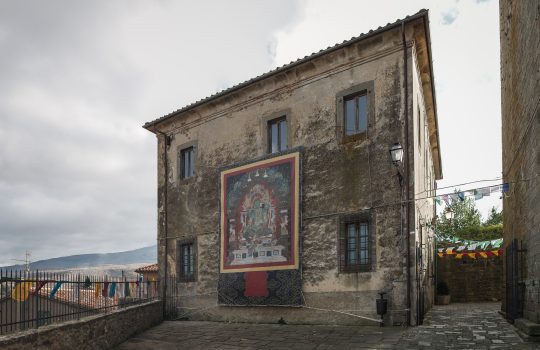 The medieval building housing the MACO

MACO director Alex Siedlecki welcomed those who were present as well as those in webcast and thanked the more than 100 people, from all over the world as well as local craftsmen, who had worked to create the Museum.

After this, the official inauguration moved to the museum premises in the building opposite the Castle, where officials and guests were taken on the first guided tours of the MACO. This was followed by refreshments back in the Castle. 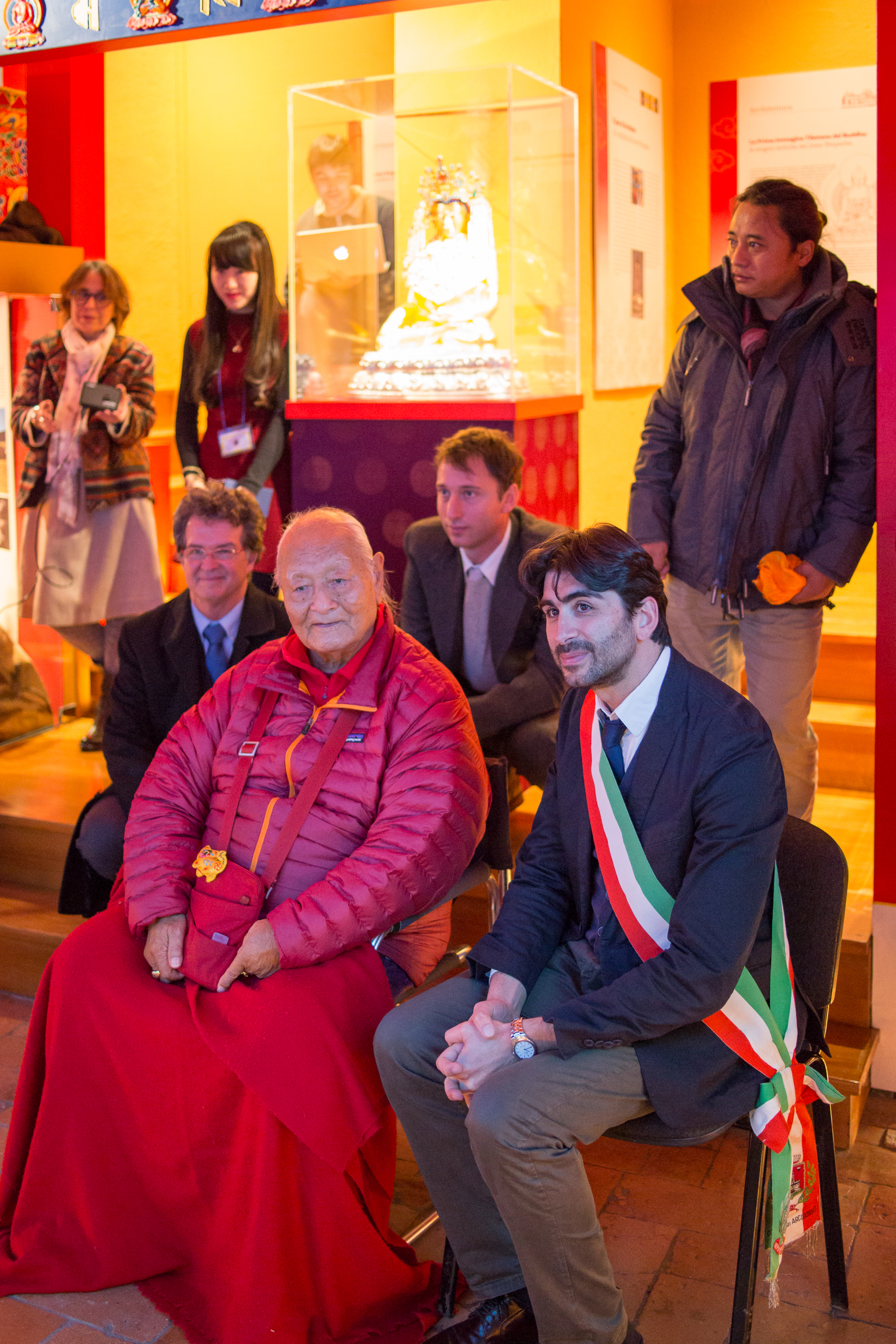 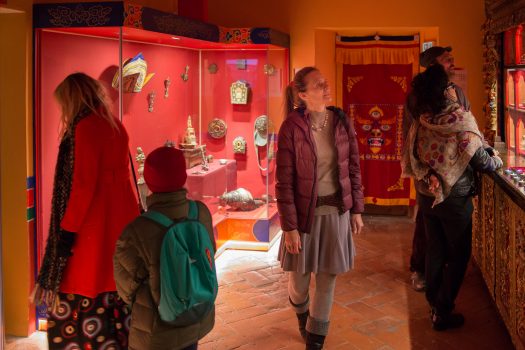 Visitors enjoying some of the exhibits

In the afternoon, the Museum was officially opened to the public at 3pm. In order to invite the public to the event, which was taking place in the historical center of the village, members of the Dzogchen Community from around the world formed a flash mob starting from the main square in the new part of town. Performing some of the Khaita Joyful Dances they moved along the main street and wound their way up to the little square below the castle which had been festooned with five colored Tibetan prayer flags. In the little piazza outside the Museum a group of Khaita dancers in costumes and holding khatags (ceremonial scarves) performed a welcoming dance for the many who were present before the doors of the Museum opened to welcome the first visitors from the public. 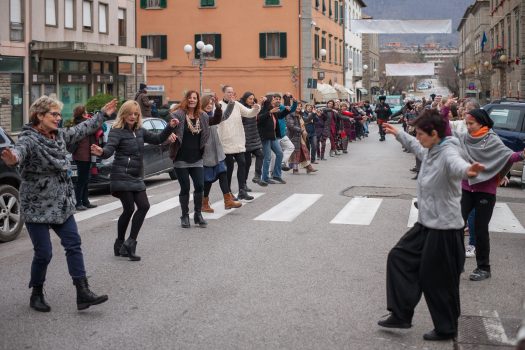 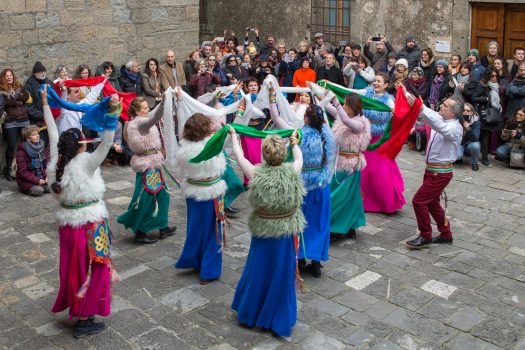 Khaita dancers performing in front of the museum

In the week following the inauguration, several free workshops given by experts were held at the castle for the schools of the area on subjects including Traditional Tibetan Painting (with Migmar Tsering and Yushan Zhong), Traditional Tibetan Folk Dances (with Salima Celeri and Yangchen Tsering), the History of Costumes and Traditional Weaving in Bhutan (with Tsering Choden), Making Traditional Bhutanese Masks (with Ugyen Dorji), an Introduction to Tibetan Astrology (with Maria Rita Leti), and Making Lungta, traditional Prayer Flags (with Migmar Tsering and Tanita Ferrari).

The following weekend, December 17 and 18, a series of in-depth workshops and conferences were held under the title ‘Smart Museums – Semantics and Cultural Heritage’. On Saturday these included the following topics: ‘Tibetan temples: From Survey to Virtual Reality’ with Federico Capriuoli and Stafano Depperu, ‘Digital Preservation Applied to the Preservation and Restoration of Monuments of Cultural Heritage’ with architect Donatella Cavezzali, and ‘Presenting Research Space’ with Prof. George Bruseker.

All photos by Oleksandr Zhytko