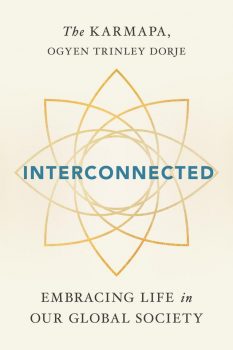 When the 17th Karmapa Ogyen Trinley Dorje made his bold escape from Tibet at the turn of the millennium, he cannot have envisaged that he would spend the best part of the next seventeen years under a kind of irksome house arrest, cooped up in a borrowed monastery in North India, an innocent victim of the protracted schism that has so riven his Karma Kagyu lineage. At long last, though, he is slowly being given the freedom to travel by the Indian authorities and to fulfill what has always seemed to be his destiny as a world spiritual leader. Interconnected – Embracing Life in Our Global Society is His Holiness’ framework for a 21st century Buddhist ethic, published in the spring of 2017 to coincide with his visits to the UK, Canada, USA and Germany.

The Karmapa’s ethical vision is rooted in the central Buddhist doctrine of interdependence, or dependent arising (pratityasamutpada in Sanskrit, or rten cing ’brel bar ’byung ba in Tibetan) Therein, he follows in the footsteps of a number of other modern Buddhist thinkers, most notably the Dalai Lama and Thich Nhat Hahn, who have also promoted this principle as a key to an understanding of our place in the world and, especially, of the environment. “By deepening our awareness of interconnectedness,” the Karmapa writes, “we can create a far more harmonious and healthy society and live far more satisfying lives.” This is not a political manifesto. He does, for instance, quietly question the direction in which globalization and consumerism are taking us, allude to contemporary events such as the disastrous collapse of a Bangladeshi clothes factory and identify strongly as a vegetarian. But, he is principally concerned here to inculcate a new moral orientation that may, subsequently, be applied to specific situations and issues.

Broadly speaking, he sets out his stall in three different stages: the intellectual, the emotional and the practical. To begin with, this interconnection is to be understood through analysis; next, it is to be felt, by developing empathy; and, finally, it is to be acted upon, using the energy of compassion. This is undoubtedly a Buddhist book: the section on the person as an interconnected individual is reminiscent of traditional Buddhist teachings on non-self or emptiness, for example, and the practice of generating gratitude as a means of developing the right interconnected attitude springs directly from the culture of Buddhist mind training. But, there is actually very little jargon or specialist terminology to alienate a non-Buddhist, here. Interdependence, after all, is already firmly part of mainstream political discourse. The Karmapa’s prescriptions need not oppose or replace, but might rather invigorate an entirely secular approach to this theme.

When I saw the Karmapa at his public teachings in London, I was impressed by two things. The first was how keen he was to reach the people of his own generation – he was born in 1985 – who will grow up with him and join him in what appears to be a very sincere and urgent quest to help change the world for the better. This book clearly has that audience very much in mind, being the result of a series of seminars conducted by the Karmapa with a small group of American university students. Those students, of course, belong to the first generation that has never known the world without the internet. While not blind to the many benefits of technology, it is noticeable that the Karmapa goes to some lengths to express his misgivings about millennials’ particular tendency to spend more and more of their time online.

He criticises the unsatisfactory nature of the connectedness of social media. “I am sceptical that virtual communities can fulfil the function of a real community,” he writes. The version of ourselves we present to others online, he suggests, can too easily be somewhat fake: an “artificial persona”, a “virtual self.” “We are carried so far away by the allure of these illusory connections,” he writes, “that we end up trapped within our own private world of electronic illusions.” He adds, “In an era of connectivity, it might be wise to make a practice of consciously turning off the screens, so we can allow closeness to blossom slowly and directly.”

The second aspect of the Karmapa that most surprised me in London was how very personal he is. This is not just to say that he has his own distinctive voice, though that is certainly true. His book is permeated by the sense of a deeply enquiring and perceptive mind, a fresh eye on the world, capable of many original insights and memorable turns of phrase. He alludes strikingly, for instance, to the “irony of compassion”, meaning: “When your awareness of others’ suffering remains mere knowledge without full affective involvement, it can cause you pain and distress. Once you connect completely on the level of feelings, that distress goes away.” He achieves a poetic quality in his image of how others, in the manner in which they receive the resources we offer them, “can serve as the mirror in which we see our own beauty… something that cannot come to light when we are caught up in an ego-centred life.”

By “personal”, though, I am really referring to the way in which the Karmapa is so open and honest about his own experience. His predecessor the 16th Karmapa, who said comparatively little and taught largely through his extraordinary noumenal presence, appeared almost to have transcended ordinary personality. The 17th Karmapa, by contrast, is often deliberately and disarmingly human. He is fond of recalling his simple upbringing in a nomad community (“a pastoral way of life – basically a premodern lifestyle”), which is evidently the inspiration for his love of the natural world and his instincts about genuine emotional connectedness.

More poignantly, though, he is unafraid to demonstrate his own vulnerability. He speaks frankly about the difficulties of being taken from his family to begin life as a reincarnated lama (“I felt really strange at times.”), calls himself “His Loneliness” (“Who wants to be friends with someone who is considered to be not entirely human?”) and shares the hurt of being taken advantage of (“There have been people I trusted who did not fully live up to the trust placed in them…”). In London, in answer to a question, he confessed that he had tried and failed to keep an aviary, as the 16th Karmapa famously did, as he never felt comfortable with seeing the birds confined in cages, stating baldly: “Because I have always been caged.”

What is the Karmapa telling us, in all of the above? That he is his own man, for sure, and not a pale imitation of his predecessor. His remarks have something in common with those of a few other young lamas who, in recent years, have chosen to let in the light on the downside of the tulku system, though unlike some, the Karmapa seems utterly resolute in living up to the responsibilities of his role – the responsibilities, as he points out, which he left Tibet for as a teenager. Indeed, there can be seen a passionate confidence and conviction in his own worth reflected in his frustration with the obstacles put upon his freedom of movement. “As a result, I have had to greatly reduce my expectation of what I will be able to accomplish,” he writes, “… I am living this life primarily cherishing and supporting others, trying to serve as a sort of refuge where others can be assured of finding love.”

His candid self disclosure is also consistent with an atmosphere of radical truthfulness that surrounds the Karmapa, a determination to cut through all the protocol and hoopla of his position, to deal with the world as it is and not hide behind the façade of an inscrutable spiritual monarch. In the context of his ethical message, finally, it is part and parcel of the model he himself presents to others of the humility and authenticity of self that he sees as essential to true participation in the web of interconnection, in which he is as involved as anyone else. “Even if I do not have the ideal external conditions to work toward my aims, I am sustained by the awareness that others are dependent on me and have placed their hopes in me,” he says, “For me, the basic fact of my interdependence is a source of courage and determination.”