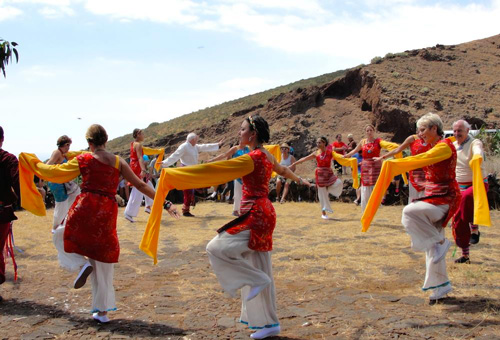 “Era” is a circle space surrounded by a small wall made of stones, like the ones that pave the ground and kind of draw a mandala on it. In the past, the wheat was brought to such places after the harvest and there people worked separating the chaff from the wheat.

For the fifth year, the Festival Rural de Creación brings art and awareness to El Tablero, a neighborhood of Santa Cruz, capital of Tenerife. There people decided to preserve their rural lifestyle and stood up against the so called “progress” which would alter the landscape and not necessarily improve the quality of their living.

The four day program was thought to bring together the old and the new generations, residents and people from other parts of the island. The Cultural Center and other public spaces held exhibitions of paintings, sculptures and a public talk entitled “Other Solutions to the Crisis”. Also along with medieval, folk and contemporary music, story telling, theater, short films and workshops for kids. The high point of the festival is the guided routes to the eras led by an historian. They ended with music performances and tasting of potaje, a typical Canarian dish.

Up on a hill facing the ocean, a Khaita Joyful Dances presentation closed the last guided route and the festival at La Era de Los Trujillos.

Video of the event: http://m.youtube.com/watch?feature=youtu.be&v=BgCp0WaYOgc