The Story of the Khandroling Stupa 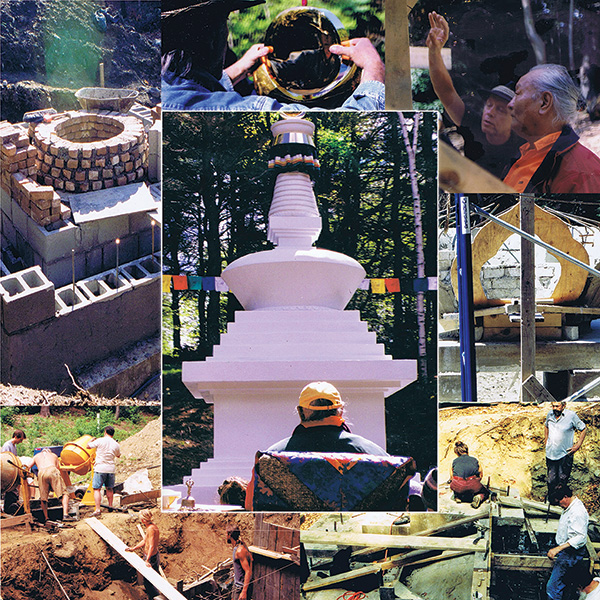 It was during a retreat with Rinpoche at Tsegyalgar, in the summer of 1995, that the Dzogchen Community received the news that Rinpoche had developed cancer. As the shock of this news began to take hold, Rinpoche asked to be taken to Khandroling, and requested that the Community do a fire puja. To this end, everyone traveled to the top where the Vajra Hall now stands.
After the fire puja, long-time Community member Jim Smith asked Rinpoche if it would be a good time to build a Stupa on the land. At the instant of hearing this question Rinpoche replied, “Yes, a very good idea.” JIm asked Rinpoche what style of Stupa should be built, and Rinpoche indicated the style of the Stupa of Perfect Victory, which is also called the Stupa of Long Life.
Jim asked Rinpoche where the Stupa should be built, and Rinpoche said he would show him. Down the hill from the Vajra Hall, there is a sort of cross road, and there Rinpoche stopped, turned right, looked around, tapped his foot on the ground, and said: “Here.” On that spot Jim placed a large stone. This is where the Stupa stands today.
Over the ensuing years work on the Khandroling Stupa continued. Then, when Rinpoche was again offering a retreat in Tsegyalgar he was able to dedicate the Stupa. What had begun as a wish for Rinpoche to be healed and continue his teaching had come to fruition. After the dedication Rinpoche said that the Stupa would be of great help to the people in the area, and have a healing influence, as well as function as an inspiration for all.
Over the last couple of summers, Jim has dedicated his energy to making repairs to the Stupa, and this summer he hopes to finish the work on the structure of the Stupa itself. Then, he plans to construct a walkway around the Stupa, and build a small retaining wall on the east side to hold back the sloping earth and provide an area for seating. He plans to complete these improvements, along with landscaping, as an offering and make a place that people can enjoy and where they can find inspiration long into the future.
The Tsegyalgar East Gakyil is starting a fundraising campaign to support this important project. Jim’s labor and skill are entirely voluntary, but due to the cost of materials, the project will cost $9,000 to complete. The work on the walkway, wall, and landscaping will evolve in an organic, interrelated fashion, so that the amount we do raise in this campaign will beautifully and harmoniously enhance the impact of this sacred place.