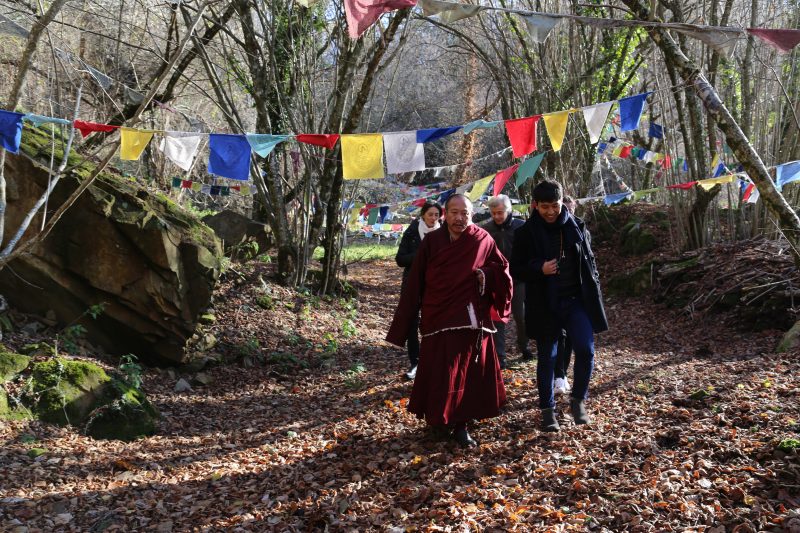 On Monday December 4, 2017, Merigar West was honored to receive a visit from the Khenpo of Galingteng Monastery, one of the most important sacred sites in east Tibet founded in the 9th century by Lha Lung dpal Gyi rDorje, a student of Padmasambhava. The Khenpo, who was recognised by Chögyal Namkhai Norbu as the reincarnation of a famous yogi called Ngawang Chospel, direct disciple of Kunga Palden Rinpoche (master of Jamyang Kyentse Chogyi Wangchu) was in Italy on his way to Tenerife to greet Chögyal Namkhai Norbu on his birthday.

The Khenpo was accompanied by his translator, Sonam, and Andrea Dell’Angelo, in charge of the NGO, ASIA. The day was sunny and bright and permitted the Khenpo and the several Merigar people accompanying him to enjoy a pleasant morning walking around the Gar, visiting the Gönpa, Gadeling, the Stupas, the Mandala Hall, and the library. 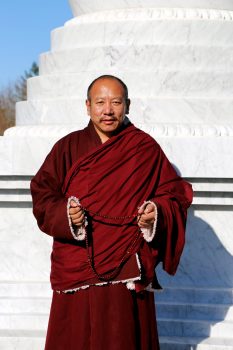 After lunch in the Gekö’s hall, the Khenpo came the new dining room to greet and speak to many of Chögyal Namkhai Norbu’s students who had gathered to meet him. He began by telling them how fortunate they were to have him as their teacher and talked about Rinpoche’s visit to Galenteng several years ago.

Then he briefly outlined the history of the monastery and mentioned that in 1997 Chögyal Namkhai Norbu told him that he had had a dream through which he understood the Khenpo to be a reincarnation of one of the famous Lamas from Galenteng. For that reason Namkhai Norbu told him that he should be in charge and take responsibility for the monastery and the ongoing work there.

Speaking about the ongoing work to build the retreat center for 4 year retreats, he said that although building work on the rooms had been completed, the temple had not, and since regulations in China would be changing at the beginning of 2018, there was great urgency to complete the temple by the end of 2017, and for that they needed around 160,000 euro.

Then in reply to a question, the Khenpo described the many years that he had spent in solitary retreat in the mountains, at times concerned about wild animals and thieves, at other times facing hunger when food supplies ran out. After his first 7 years in retreat he moved to a cave about 6 hours away on a holy mountain at almost 5000 m. Even though he once remained a couple of months with almost no food, he stated that his stay in the cave was one of the happiest periods of his life and his practice went very well. He also mentioned how important it was to do practice in a quiet places where you are undisturbed. In fact, the Khenpo continues to live in retreat at Galenteng, only attending ceremonies from time to time at the monastery. This was his first time in the West, travelling from his retreat place to Beijing and then on to Italy! 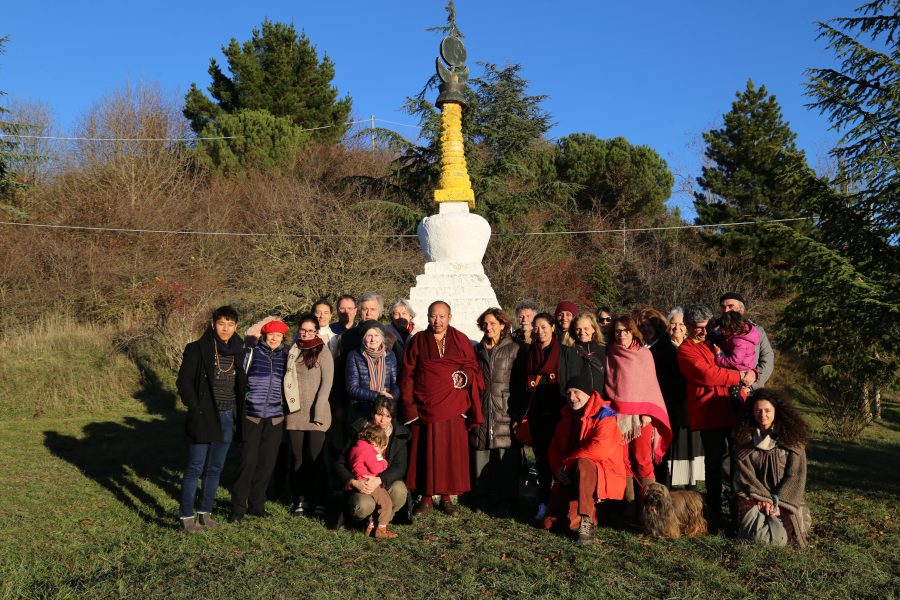 To conclude his visit  the Khenpo and his translator accompanied by the many people who had come to greet him, walked to the small Stupa on the hill behind the Yellow House where a group photo was taken. After turning around the Stupa a few times his visit to Merigar came to a close and he was whisked back to Rome and then on to Tenerife.

Galingteng Monastery is situated in Derge County, Ganze Prefecture, Sichuan Province, China. Originally a Nyingmapa Monastery, it was then affiliated with the Sakyapa tradition, and today still combines the practice of the two traditions. Chögyal Namkhai Norbu, closely linked to this monastery where he spent his childhood studying with his uncle, Khyentse Chökyi Wangchuk, requested the intervention of ASIA and the International Dzogchen Community.

ASIA has been operating in the village of Galingteng since 1993, restoring the temple with its ancient mural paintings and historical monuments. The College of studies was rebuilt and a new school and clinic were opened. All this was possible thanks to the contributions of many private and public donors, in particular the International Dzogchen Community.

In 2015, the local people asked ASIA to build the retreat center on the holy mountain of Shublung. The new college will consist of a small temple and 18 rooms where the students will spend 4 years in retreat.

See the video of the monastery by Palzom Films.