The tenth and last volume of the series of teachings from the Longsal cycle is now available as an e-book (PDF).  It contains upadeshas and instructions received by Chögyal Namkhai Norbu through dreams in the period from 1967 to 2003. 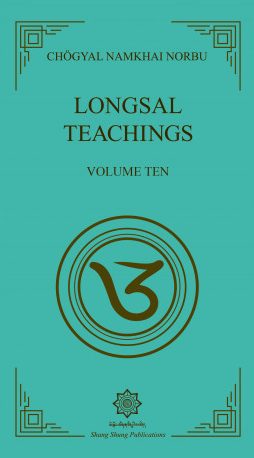 The Direct Introduction to the State of Primordial Pervasiveness in Samsara (’Khor ba ye brdal gyi dgongs pa ngo sprod) is a method of direct introduction that the Author received from his root teacher Rigdzin Changchub Dorje (1876–1961) in 1985 through the experience of clarity in a dream. Recently we have also published Rinpoche’s oral commentary based on His teaching from New York, 2014.

The Way to Practice the Profound Path of Guru Kalachakra (Bla ma dus kyi ’khor lo’i zab lam nyams su len tshul), received through various dreams in 2002 and 2003, contains Anuyoga instructions on the practice of Kalachakra. The dreams are related to His Holiness the present Dalai Lama, to the first Dharma king of Shambhala, Rigden Dawa Zangpo (also known as Suchandra, ca. 900–876 BCE), and to Rigdzin Changchub Dorje. Rinpoche’s oral commentary to this text is in the works.

The Instructions on the Outer, Inner, and Secret Rushen (Phyi nang gsang ba’i ru shan gyi gdams pa), received between 1987 and 1998, contains instructions on the practice of Rushen according to the Dzogchen Upadesha series. The dreams are related to Rigdzin Changchub Dorje. An explanation of the practice of the Rushen of the Voice written by the Author in 2017, titled The Upadesha on the Four Voice Trainings from the Longsal Rushen (Klong gsal ru shan gyi ngag sbyong rnam bzhi’i man ngag), is also included. We are also going to publish the oral instructions to this practice.

The Annotated Instructions on the Twenty-Five Spaces (Klong chen nyer lnga’i gdams pa mchan can) contains an upadesha already published in Longsal Teachings, Volume Seven, together with explanations that clarify the profound meaning of these mantras.

The Dream on The Upadesha of Buddhamati (Buddha mati’i man ngag) was published in 2006 as a special edition for sponsors. It is related to The Spontaneous Peak (rTse mo byung rgyal), one of the eighteen lungs or fundamental texts of Dzogchen Semde, whose transmission was given several times by Chögyal Namkhai Norbu in the course of his Santi Maha Sangha trainings.

To conclude the series of Longsal teachings that have been translated for the benefit of the Dzogchen Community,  the translator of the series, Adriano Clemente, chose a short upadesha that encapsulates the essence of Atiyoga in four lines. It was transmitted only once, on June 8, 2003, during a retreat in Moscow.

Longsal Teachings, Volume Ten e-book is available in the webshop of the Shang Shung Publications: