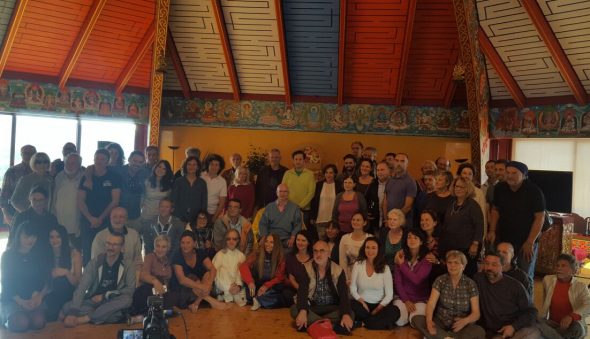 Around 70 people both from the Dzogchen Community and the Shangpa Rimay Community participated in a short weekend retreat on October 1-2 led by Shangpa Master Denys at the Temple of Great Contemplation at Merigar.

Master Denys began by presenting himself and talking about the special spiritual relationship or damtrog between him and our teacher, Chögyal Namkhai Norbu, and their two Communities, the Dzogchen Community and the Shangpa Rimay Community.

He went on to talk about the Kagyu Shangpa tradition founded by Khyungpo Naljor, and a concise synthesis of the teaching called the ‘Five Golden Teachings’.  After this he commented on a section of Padmasambhava’s ‘Prayer in Seven Chapters’ (Le’u Dünma, Chapter 4: The Prayer Requested by Namkhai Nyingpo). This short text communicates the essence of the Mahamudra and Dzogchen teaching. He chose to comment on and share this text following the spiritual advice of his root master, Kalu Rangjung Kunkhyab (Kalu Rinpoche).

The retreat concluded with a collective meditation with related transmission (lung) of a practice of Chenrezig attributed to Thangton Gyalpo and led by Shangpa Master Denys. A practice dedicated to developing compassion and bringing all six classes of sentient beings to total realization through visualization of the divinity and mantra recitation.