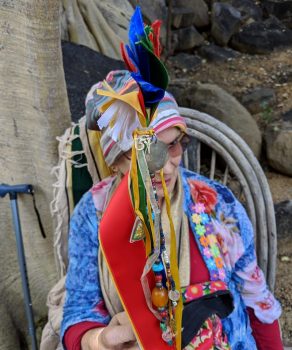 “Da” means arrow. A dadar is a ritual arrow decorated with silk ribbons. It is used in many Long Life practices for recalling all the aspects of our vital energy and protective energy that are damaged, lost or stolen. The manifestations of Guru Amitayus and his Yum hold dadars and so do Mandarava and all the Dakinis in her mandala. Also we can use a dadar when we do the Long life Practice of the Immortal Dakini Mandarava.

We can construct a dadar in a more or less elaborate way, according to our wishes and possibilities. It represents our life. Its main features are a stick and five silk ribbons or scarves, jewels or beads and a melong or mirror. The stick symbolizes our yab aspect; it is stable and represents form, thab (method). The silk ribbons represent our yum aspect: they are light and move in the air and symbolize sherab, wisdom and energy and the essence of the five elements. The jewels represent concentrations of energy. The melong is a symbol of our primordial potentiality. So these are the essential features.

The stick should be approximately one cubit long or the length from elbow to fingertips, but it doesn’t matter if it is a bit longer. We usually use a bamboo stick because it is light and strong.  If you can find one with five joints or knots that is good because they would symbolize the five main chakras. But if that is not possible three knots is also fine. When Rinpoche gave the Mandarava initiation in August 2007, he used a dadar that had amber and coral threaded onto the whole length of the stick.

The melong can be tied on at the top of the arrow, at the point where you tie on the ribbons, using a narrow piece of ribbon or strong thread.  It can be the same ribbon or thread that is used to tie on the five ribbons.  Rinpoche has used quite a few different dadars when leading practices in the Community. The one he used in August 2007, when gave the Mandarava initiation, had a small melong attached at the bottom of one of the strings of jewels. The melongs sold at Merigar, made by a member of the Community, are always made using five metals: gold and silver, copper, tin and iron. A melong of the previous batch is always included in the alloy. The first batch contained a gold melong that was made for Rinpoche and which he wore for several years. So there is always a small part of that original melong in every new one.

An arrow also has a point. You can make it in any way you like. For example, some people use a small crystal but many other people have points made of gold or silver or other metals. It is also possible to just cut the stick to a point. Anyway it is better not to make it too sharp or it will bother you when you practice. At the very top an arrow usually has feathers. We can use any feathers we like. I used peacock feathers because they look like tiglés and have Tantric and Dzogchen symbolic significance. 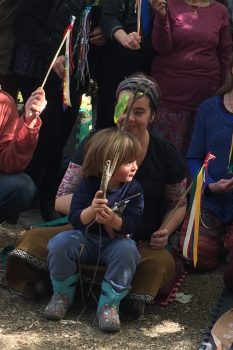 Stick and leaf dadar at the Tsegyalgar West retreat 2019

If we want to make our dadars even richer and more elaborate we can tie strings of jewels onto the stick. When Rinpoche did a month long personal retreat of Mandarava practice in Merigar in August 2007 he had dreams clarifying some aspects of the Mandarava practice. In the first dream he discovered that 3 lines were missing from the terma he wrote down in 1984. One of them, from the description of the visualization, was that the dadar was decorated not only with five colored silk ribbons but also with five colored jewels. So we can use turquoise (blue and green), lapis lazuli, amber, coral, pearls or any others jewels we may have.

If you can’t find the materials described here you can make a dadar with whatever suitable materials are available to you.  Some people buy an arrow from a “sports” shop, or you can cut a straight stick from a tree or any other plant. You can buy a small round mirror from a pet shop: the kind they use in birdcages. If you have no jewels you can use glass or plastic beads. I haven’t heard of any rules for making a dadar. As long as we keep in mind the main features and symbols we are free to improvise as much as we like.

The dadar symbolizes our life so we try to make it as beautiful and as perfect as we can, according to our possibilities.