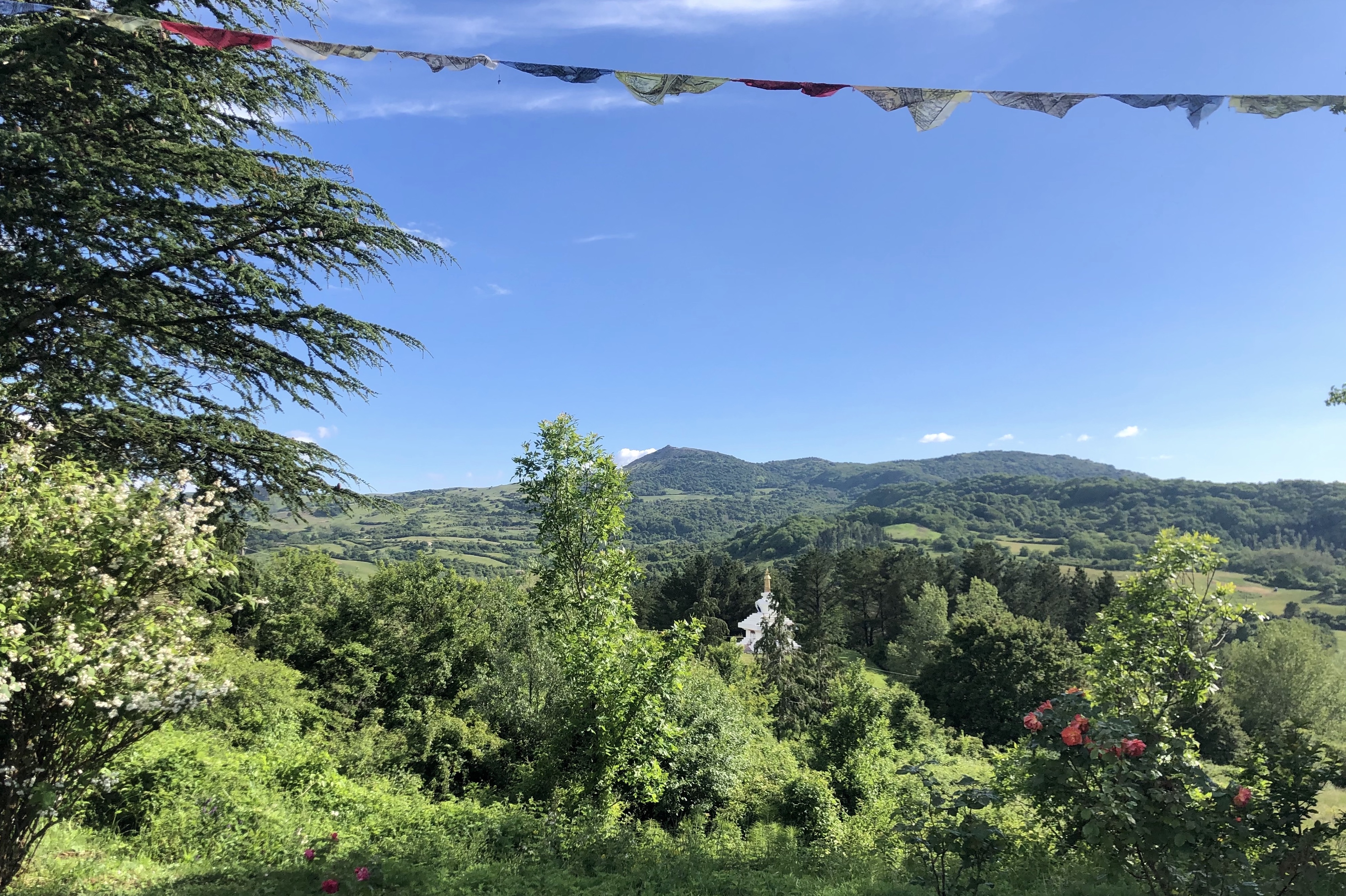 The start of the metal-mouse year was, to say the least, complicated at Merigar.

Italy quickly became the center of a situation that until shortly before seemed far away. In a few weeks, even a few days, we found ourselves confined to the house and witnessing an exponential rise in the number of infected and dead due to COVID-19. In the blink of an eye, we went from sending words of support to China, to receiving them from all over the world. Just as quickly, we went back to sending them, because in a short time the problem was no longer so great only in Italy, but it had spread everywhere. The pandemic.

In northern Italy, especially in Lombardy, the situation was really serious and many people died alone in isolation and without the comfort and help of loved ones. The hospitals were full and barely managed the mass of patients who needed help. Fortunately, there were not many cases in the Merigar area and the main effect of the pandemic was being forced not to leave the house except for situations of real need and, for a period of time, even having to remain within one’s own small municipality. All nonessential activities were suspended and masks and gloves became indispensable.

The first thought at the beginning of this lockdown was to start a practice program as many of us felt the need to do formal protective practices and to practice for the dead. Thanks to the webcast, organized by Merigar and Dzamling Gar, the program was intensified week by week. In spite of a few difficulties we managed to guarantee a program with different daily practices. Initially at Merigar it was possible to stream the files from the Mandala Room but as the lockdown tightened, for a good number of practices we had to organize the streaming from the homes of the various people who led the practices.

At the same time, those who usually work at Merigar, people in charge, employees and volunteers, have had to work mainly from home during the lockdown period. However, despite the difficulties, our ongoing projects have continued and we have been working to organize projects for the future.

For example, the administration has worked full-time on ordinary accounting and to meet budget deadlines. The financial statements that should have been approved at the members’ meeting by April, which obviously was not possible, are waiting for a solution. The Merigar Gakyil and collaborators have been working on ongoing projects, such as those carried out with the contribution of the UBI (Italian Buddhist Union) and not yet completed, such as:

You can find more information on some of these projects on the Merigar website, in the members area.

We have also been working to announce new projects and search for other types of funding for the future.

Obviously all the courses and activities planned for this time have had to be postponed, and now we are reworking and redesigning activities for the coming months on the basis of the current regulations of the Italian government.

In these months of quarantine, ordinary and essential maintenance works on the buildings at Merigar, the road, and the surrounding woods also continued. For example, some trees at the top of the landslide were dangerous and had to be cut. This area is geologically fragile and closely monitored. The green areas, flowers, and gardens also continued to be cared for.

At the end of March, the distribution of the masks donated by the International Cultural Atiyoga Association, an association based in China created in 2018 to support the vision of our Master Chögyal Namkhai Norbu, started in the municipalities close to Merigar.

In May, at the beginning of “Phase 2”, as required by state and regional provisions, the facilities at Merigar were still closed for courses, visits, practice activities and social moments, however, at the Gönpa, it was possible to resume work and so those jobs that we had planned for this restructuring phase have almost been completed. In particular, the external wooden railing surrounding the entire external walkway of the Gönpa was completed, and some masonry finishing work was done for the bathrooms.

Now that Italy is slowly starting to reopen, we are resuming activities, but with the rules and restrictions that we are already used to in all the places that we use. The first collective Ganapuja, led by Adriano Clemente, was organized on the 1st June, the tenth day (day of Guru Padmasambhava) of the month of Saga Dawa, a particularly important month from the Buddhist point of view. Between spacing and masks, everything went well as did the subsequent Ganapuja, combined with the Mandarava practice led by Nina Robinson, on the full moon day of June 5th, in which practitioners participated on site, both inside and outside the Gönpa. From June 8th it will be possible to participate live in the other practices organized at Merigar, which will continue to be broadcast in webcast, and dance on the external platform where the marquee has been set up. 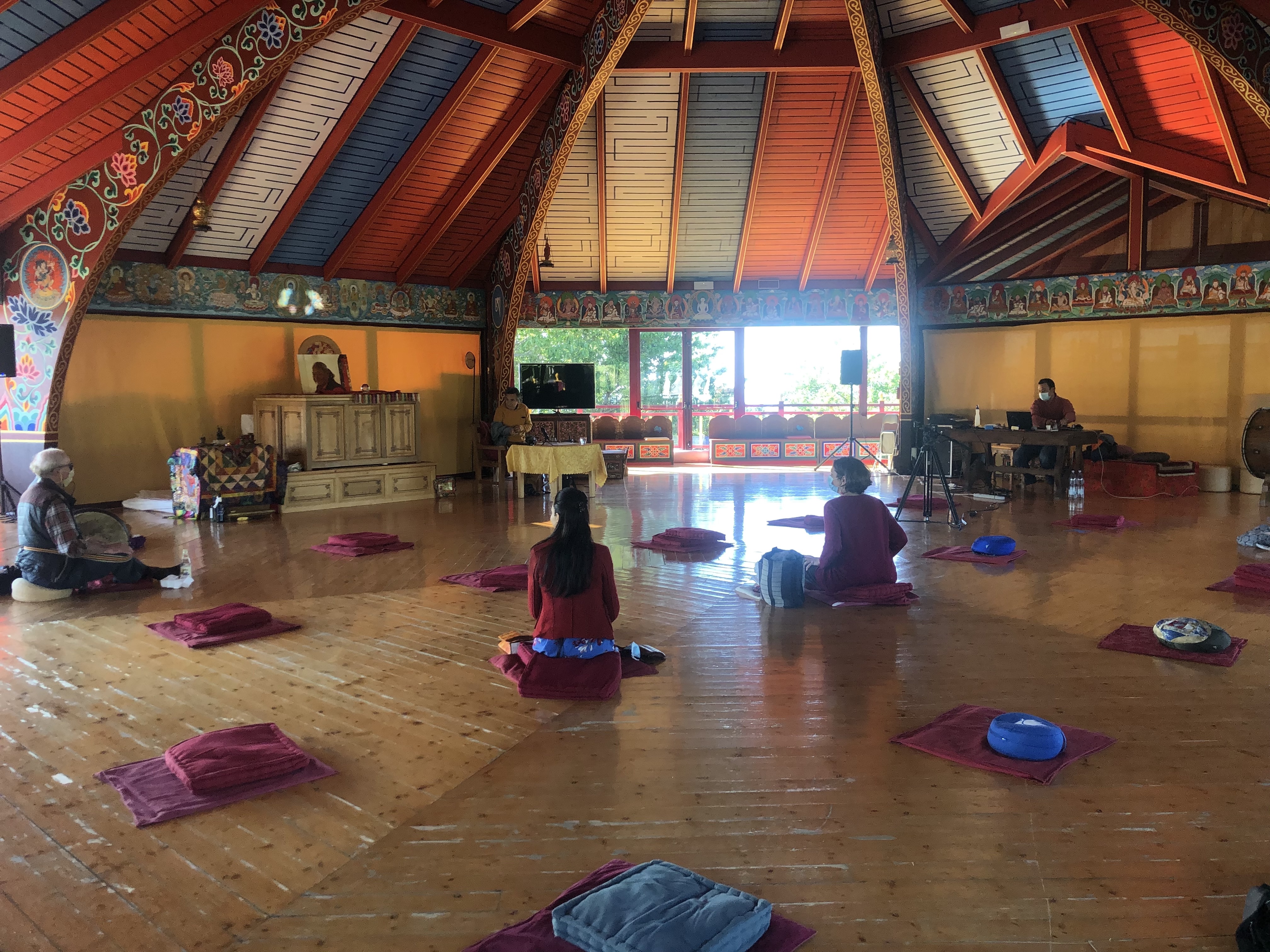 The first Ganapuja after lockdown.

On June 6, MACO, the Museum of Asian Art and Culture in Arcidosso, also reopened, together with the circuit of Amiata museums and the Castle.

We are also starting again with our program of courses, retreats and guided tours, obviously with a limited number of participants. In order to do this, we are following the regulations regarding places of worship, gyms, or sports activities, depending on the activities we are organizing. The rules we need to observe are many, but at the moment it is the only way we can practice together. The Merigar website will be gradually updated with upcoming activities.

A separate note on the Library Talks. In the past years this series of talks, made up of various cultural events organized by Merigar, has been held both at Merigar, in particular in the Library, and in the Arcidosso Town Hall or at the Castle. With very different themes, from the mind in Buddhism to Indian dance, passing through Tibetan poetry, the biographies of the Masters, the sacred places and much more, the Talks of the past years have introduced Merigar, the Library, and some themes of teaching to an increasing number of people, expanding and diversifying our cultural contribution in the area.

The third edition of this series was scheduled for 2020, starting on March 21 with bi-weekly appointments, intensifying in early summer, and continuing until around October. Due to the pandemic, we have transformed this initiative and are offering an online version of it.

It is not a simple re-proposal of the Library Talks, since those events were designed as opportunities for live discussions and gatherings and to bring different people to know and explore the library in person.

The online version has two sections: the Reading Aloud section is made up of short Tibetan and Oriental stories, parables, and tales read and interpreted by professional actors to whom our heartfelt thanks go.

The section on reflections and insights on issues related to Buddhism, Tibet and the East in general started on 29 May, thirty years after the official inauguration of the Gönpa and the Merigar Library. In this section the talks are in both Italian and English.