In May, a cycle of conferences organized by Merigar West in collaboration with the Arcidosso Museum of Asian Art and Culture began. The purpose of these meetings is to introduce, in common terms and to a broader audience, some of the topics of the Tibetan and Buddhist world, such as an in-depth study of the itinerary proposed at the Museum, inaugurated last December. 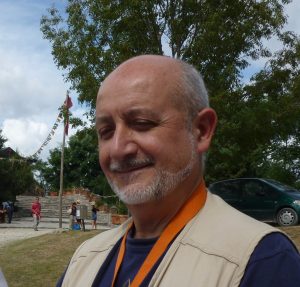 On April 1, the first conference in the cycle was held: “Birth, Life and Death”, given by Dr. Gino Vitiello, who gave an extensive introduction to Chögyal Namkhai Norbu’s book with the same title. In addition to being a student of Chögyal Namkhai Norbu since 1977, Gino Vitiello is an instructor of Yantra Yoga and Santi Maha Sangha, a physician, psychotherapist, and expert in Tibetan medicine. During the conference he spoke about, among other things, the importance of birth as human beings, and the causes of the conception of life in the womb, with advice on behavior for the pregnant woman. He explained how to live in good health, describing how imbalances of the humors lead to illness, and how important it is to relax tensions in order to live in a healthy way. And finally, with regard to death, he spoke about its nature and explained how it is faced following the deep knowledge of Tibetan culture. The public responded warmly to his presentation that had more success than expected. The audience, made up mainly of people who were new to the subject, filled the Arcidosso town hall and there were many questions addressed to Gino Vitiello. Given the many requests, at the end of the meeting there was a plan to reintroduce the subject in a broader and more articulate manner in the autumn. 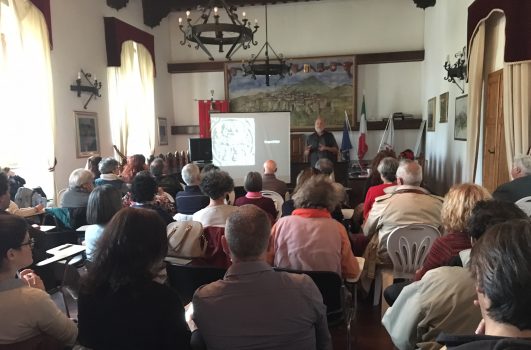 On May 6, at the Arcidosso town hall, Professor Fabian Sanders gave a conference entitled “The Life of the Buddha”. Fabian Sanders, a student of Chögyal Namkhai Norbu, teaches Tibetan language and literature at Ca’ Foscari University in Venice. The conference presented the life of Buddha Sakyamuni: his birth as an extraordinary being, a Buddha, the attempt of his father, the king, to keep him safe from the pains of the world, the moment in which the discovery of human suffering pushed prince Siddharta to look for its origin, and finally the spiritual path that led him to the achievement of perfect illumination.

The talk was enriched by the iconic support of tankhas from different periods.

There were many local people at the talk with particular interest in the topic and questions went on for an hour after the end of the conference. 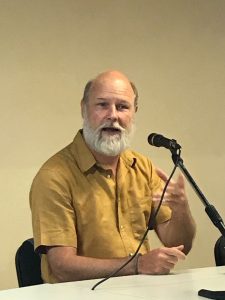 The next day, Professor Fabian Sanders held the third conference in the cycle, “The Figure of Guru Padmasambhava” at Merigar in the Mandala hall. Sanders described the historical situation of Tibet when the dominant religion was Bon and how, following a specific wish of the then Tibetan King, Buddhism was introduced. Within these historical events the story of the great practitioner Guru Padasambhava was introduced, invited by the king to appease all sorts of hostile forces in order for Buddhism to spread to those lands. Guru Padasambhava is a well-known figure among Dzogchen Community practitioners, many of whom participated in the conference and found the many details of the story interesting. People who did not know about this great Guru also appreciated the in-depth explanation of the origin of Buddhism typical of those areas within Tibetan culture.

On June 3 at the Aldobrandescan Castle in Arcidosso, the series of three conferences by Professor Sanders ended with his talk on “Introduction to Tibetan Buddhism”.

The professor described from a historical point of view how Buddhism spread outside India, its land of origin, taking on very different connotations depending on the places where it was established in central and eastern Asia. In particular, he focused on the form it took in Tibet, due to the historical period in which it was established and to the inclusion of peculiar elements of cosmology, symbology, and expressiveness throughout the Himalayan area. The conference room was also full for this meeting, and many people enjoyed the way Sanders showed the differences between the various Buddhist schools whose names are known in the West, but people struggle to distinguish them.

This first cycle of conferences will end on June 23, at the Aldobrandescan Castle in Arcidosso, with Michael Katz talking about Lucid Dreaming. Michael Katz, a psychologist, is also an instructor of Santi Maha Sangha and authorized to teach dream yoga and meditation by Chögyal Namkhai Norbu.

Lucid dreaming means dreaming knowing that we are dreaming. We spend many hours of our life in sleep and developing the ability to have lucid dreams allows us to understand the meaning of the illusion of human life and be beyond space and time. It is a practice that promotes a better awareness of life and of the relationship with the self and, therefore, of behavior in daily life. It allows us to explore the creative potential of the mind deeply. Since ancient times it has been an integral part of different spiritual paths. Based on the instructions of wisdom and experience that Chögyal Namkhai Norbu has been transmitting in the West for several decades, Michael Katz will describe the basics of the technique and its beneficial effects.

This conference will be followed by a course on lucid dreaming to be held at Merigar West.