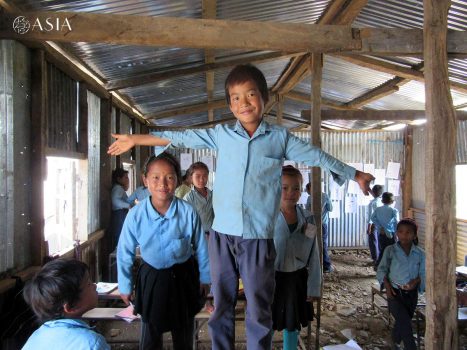 He lives with his family in the Rasuwa District, a steep and difficult to access region north of Kathmandu, 60% of which is at an average altitude of 3000 meters. Here the earthquake caused 95% of the buildings to collapse and it was very difficult to reach the area due to landslides and the partial or total destruction of roads after the quake.

ASIA has been in Nepal since 1996, and was the first to intervene in this area that remained isolated and without aid for days.

In the Rasuwa District, as in other areas affected by the earthquake, ASIA has distributed over 55,000 aluminium panels to build temporary shelters, and create 58 temporary classrooms for 2,345 children as well as other activities that you can read about in more detail in the Report on the emergency intervention in Nepal (http://www.namaskarfornepal.org/docs/report-nepal-1-en.pdf). ASIA has helped more than 26,000 people in total.

Now the goal is to rebuild the schools destroyed by the earthquake. The first step will be to start with the rebuilding of four schools to accommodate around 591 children in the VDC (Village Development Committee) of Yarsa and Saramthali, and also bring help to the community (about 10,000 people).

This project is not limited to reconstruction. It will make the schools become Centers for families: training on children’s rights and the danger of child trafficking, advanced teaching methods, recycling techniques, organic farming and permaculture will be some of the activities.

In the last 20 years in Nepal, ASIA has established long distance support projects for Tibetan refugee children and monks, principally at the Manasarovar school and the Bönpo Triten Norbutse monastery in the Boudhanat district of Kathmandu.

In 2009 ASIA started up a project for water purification, training in health and hygiene, and education in the districts of Rasuwa, Kavre and Dolpo, in order to improve the health of the population and to increase the literacy rate by giving support to 21 schools.

In 2015 ASIA started a new food security project by creating family vegetable gardens and giving training on organic farming methods in addition to all their activities linked to the emergency earthquake.

Now our efforts are concentrated on the reconstruction of the schools destroyed by the earthquake, a major commitment to the future of Nepal. If you also want to participate in the #namaskar4nepal project, you can do so with a donation at http://www.namaskarfornepal.org/en/

Whether big or small your donation will be a brick that will contribute to the reconstruction of the future of Nepal.