In one of the last occasions that Oliver Leick had to talk briefly with Rinpoche, he mentioned to our precious Master that he was going to Australia to lead a retreat in Namgyalgar and to do some work with the Shang Shung Institute Australia (SSIA)  team. Rinpoche then replied with a smile and twice with a strong affirmative “Benissimo!!” Soon after Oliver let me know that Rinpoche’s gave his blessing for his visit to Australia. 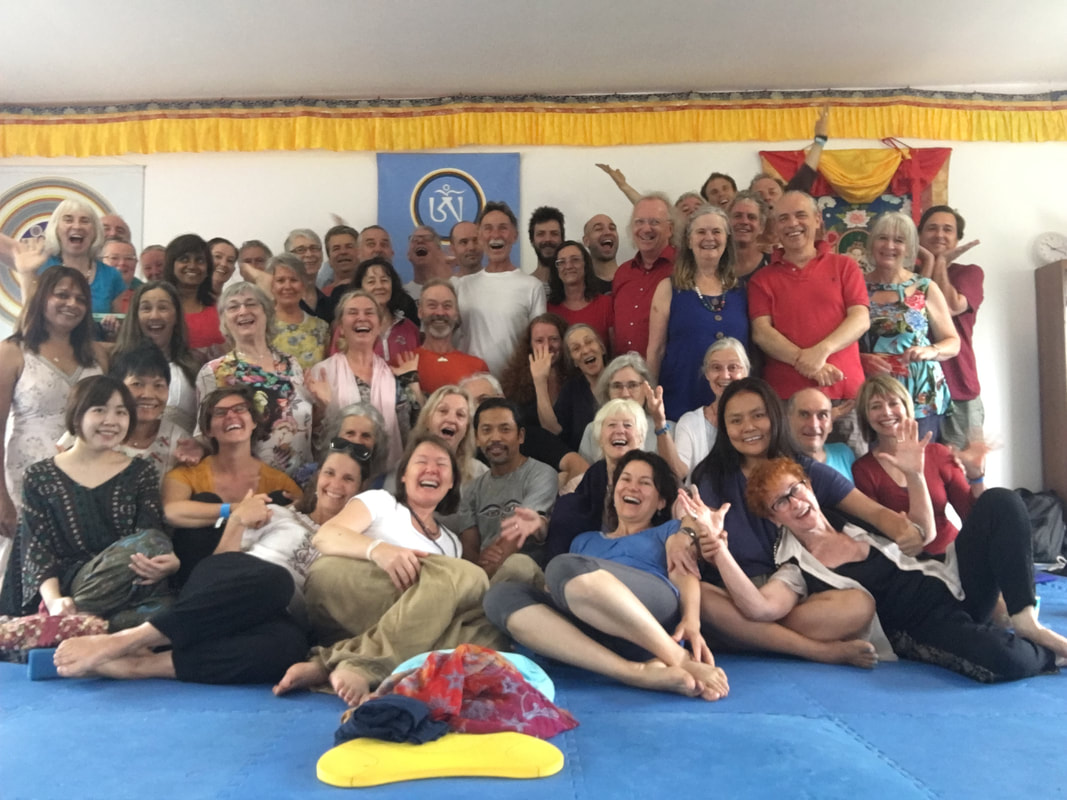 From the November 14 to December 1, 2018 the Namgyalgar Community was very pleased to host Oliver Leick for the first time in Australia.

SSIA initially invited Oliver in his role of Director of the Institute for the new Atiyoga Foundation. His visit held much significance for SSIA:  A practical one, to have the opportunity to have some meetings with the team of SSIA, for him to visit the Gar and the Community so as to gain a better sense of the specific circumstances existing in Australia.

Aslo a symbolic one, his visit solidified the connection of SSIA to the other branches of the Institute in accord with Rinpoche’s vision of the various branches as one global entity or family. Reaching out to us, the visit of Oliver helps SSIA to strengthen this sense of connection and inclusion because, while Guruyoga practice provides the discovery of a sense of connection beyond distance and the internet as a practical tool for it, still we can’t hide that some feelings of isolation naturally arise because of the huge distance of our location from other Institutes in Europe, US, Russia and Tenerife, where perhaps the shorter distances between them allows members more easily to travel to collaborate or attend meetings, events, etc. and in this way certainly positively influence each other. 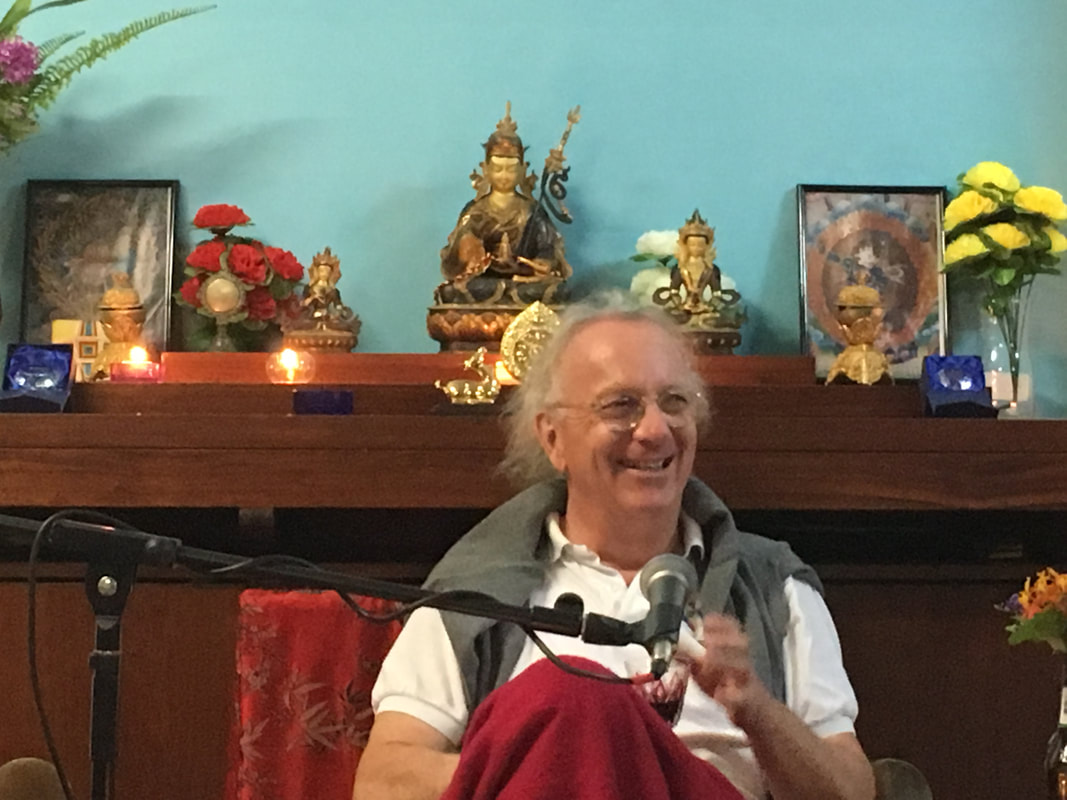 During his visit to Namgyalgar, Oliver was also invited by the Namgyalgar Gakyil to lead a retreat and he agreed to do a week practice retreat of Rushen from November 23-29.

During the retreat Oliver also gave an explanation of the Atiyoga Foundation in a specific talk to the Namgyalgar Community, the changes in comparison with the Shang Shung Foundation and the further aspect of opening to the public that it brings forth in its mission, as well as clarifying that many aspects still require more time to be fully understood.

In this time of mourning the immense loss of the recent passing of our precious Master, having Oliver, an old student of Rinpoche, and someone that Rinpoche entrusted enough to appoint him as director of Shang Shung Foundation, coming to Australia and leading a retreat has been certainly of great significance for the Namgyalgar Community.

To organize the visit and the retreat was been an opportunity for a closer collaboration between Namgyalgar Gakyil and Shang Shung Institute Australia, that, since the introduction of public courses, these two entities have been invited to envision each other as being two sides of the same coin. In this fashion the two day work meeting that the team of the Institute had with Oliver was attended also by Robyn Catchlove, the newly appointed Namgyalgar Gakyil President.

The time that Oliver spent in Namgyalgar and especially the week of the retreat was very relaxed and harmonious. With his humble attitude, and capacity of spontaneous communication, Oliver immediately connected with the Community and the Gar. 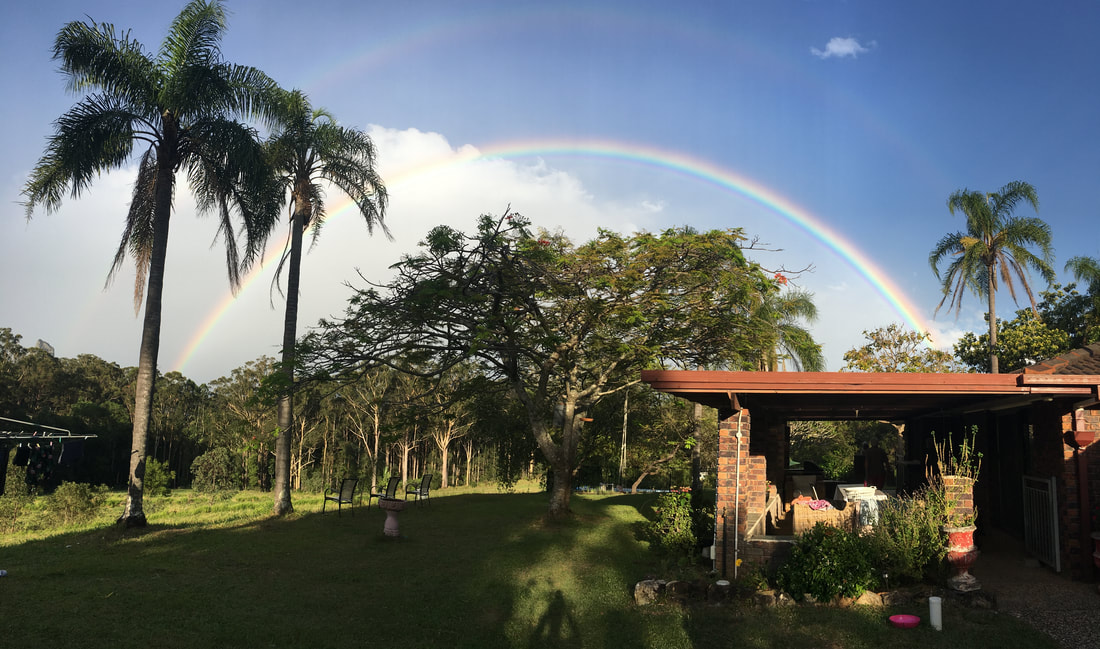 It felt that he really embraced the Community from the ground of a long experienced practitioner, and he was very aware of the delicate role he was having leading a retreat in Namgyalgar just two months after the passing of Chögyal Namkhai Norbu, and during a time that was previously programed for a retreat with Rinpoche.

Oliver chose to lead a retreat of Rushen practices according to Chögyal Namkhai Norbu’s text ‘The Stairway to Liberation’. The retreat had quite an intense program and everyday started with a first session of Guruyoga and Rushen practice at 5:30 am. That early start of the day wasn’t a big effort as most of people were ‘obliged’ to wake up at 4:30 am because of the dawn concert of all sorts of tropical birds … a natural and very effective alarm clock!!

The last practice session was after dinner and often finished around 9pm.

The retreat was attended by around 60 people, that in terms of the modest space of the Gonpa is the ideal number to have a relatively comfortable retreat, especially a retreat of practice.

The Community has really valued Oliver teachings and his leading of the Rushen practices, his great energy and generosity, and of course enjoyed the many stories and anecdotes with which he was able to enrich his explanations because of his long experience in the Dzogchen Community and years of close contact with Rinpoche.

Particularly important was the second day of the retreat when an entire morning session Oliver gave an extensive and punctual explanation to the Namgyalgar Community regarding the Ati Foundation and the possible new scenarios that are regarding the openings to the general public. Among the many details he stressed ‘autonomy and self-sustainability’ that has to inform every project and each discipline of the Ati Foundation.

There was opportunity to do Khaita dances and Vajra Dance during the retreat, and before and after the retreat two courses of Yantra Yoga were led by instructor Oni McInstry.

During the retreat there was also time just for fun, playing games, swimming at beaches on the Sunshine Coast etc. and, especially exciting for ‘young’ Oliver, visiting the Australian Zoo, that claims to be the best wildlife conservation facility in the world …

Toward the end of the retreat Oliver gathered the people for a second improvised talk to share some ideas he had about the future sustainability of Namgyalgar, following ten days of his observing, listening, discussing, playing with people and making his own initial understanding of the specific circumstances at Namgyalgar

The main observation was about how to enhance with little investment the already existing potential that Namgyalgar has to attract tourists as it is positioned in a spectacular location, in the center of a mandala of very ancient peaks called the Glasshouse Mountains, which are the remains from very ancient times of the edges of a large volcanic crater.

As many tourists are visiting daily ‘the Lookout’ for a spectacular 360 degree vista of the the large mandala of the Glasshouse Mountains only a few hundreds meters from access to Namgyalgar from the main road, the Gar then could become another place for them to visit, if it provided with some welcoming services. For instance, a simple shop of good food, a bookshop, a souvenir shop, a gallery, a walk to the lake with water lilies that is part of Namgyalgar property, some guided explanation of the activities of the Gar as a meditation-wellbeing center and also possibility of some accommodation in the house, etc. So in this way the Gar could become somehow part of the tourist offerings of the area. And by doing so following in a small scale the actual Merigar model, as Rinpoche always emphasized for the other Gars.

Having felt a good connection with the Gar, the Community and with Australia, at the end of the retreat Oliver expressed his intention to come back soon to Namgyalgar, even this year 2019 (and he is actually asking to give to him some dates soon!).

And in my mind I can easily see Rinpoche smile at Oliver saying again to him: Benissimo!!

So … maybe in November?